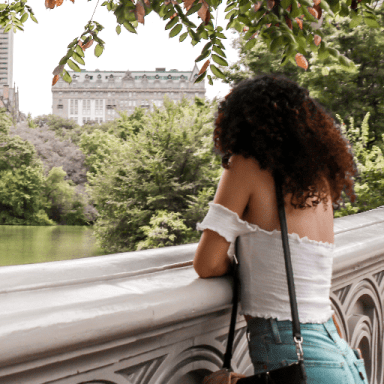 Heartbreak, it sucks. There is no other way to put it, besides that it just really sucks. Whether you were dating this person for a long period of time, were in that “almost but not really” phase, or you just really liked someone and hoped for the best but didn’t quite get there; when your heart breaks, it breaks.

With heartbreak, the idea of being okay one day seems nonexistent. You feel like you’re dying and that someone has physically ripped your heart out of your chest and completely shattered it. I have been there, I know. The only thing you want to do? Sit in your room, car, a safe place you have, and just cry. I am not going to tell you not to cry, please by all means do that. In fact, I encourage it. Cry it all out. You’re hurting and there’s nothing wrong with that.

You’re going to be okay. I know it may not feel like it right now, but you will be. As cliché as it sounds, time heals all wounds. Give yourself time to heal. I know you want instant results because this pain feels unbearable, but nothing worth having comes easy. One day you won’t be sad over this person. One day you won’t cry anymore for this person. One day they won’t matter anymore. Pick yourself back up when you’re ready and rediscover who you are. You were someone before them, and you are going to be someone after them. You would be surprised to learn that you are capable of so much.

As I’ve heard from more than one person, take this experience as a lesson, and the next time someone else comes around in your life you will be more prepared. First heartbreaks are probably the worst because you’ve never been through it before, and it feels impossible that you’re one day not going to feel all this pain, but that day does exist. Given, you may get your heartbroken again, but just know you’re going to be stronger because of it.

Letting go, it’s not easy. Especially not with the strong presence of social media. So many platforms, so many ways to hurt yourself. For some it’s easier, for others it’s more difficult to unfollow, block, delete, etc. Take baby steps if you need to. Start with deleting their pictures and videos off your phone. If that’s too much, hide them on your phone. Next is social media. You’re hurting, the last thing you want to see is their snapchat story, instagram post, tweet. Whatever it may be, if it’s going to hurt you, unfollow/block. You need to heal and this person is no longer part of your life or your journey, they’re only delaying the process. A social media break also doesn’t hurt.

Now letting them go. This is probably the hardest part. The memories won’t let you, but overall you won’t let yourself let them go. Deep down inside, you still have hope that they will come back. If it wasn’t now, maybe it can work later. Don’t do this to yourself. Is it possible? Yes, I’m not going to tell you that it’s not but I don’t want you to hold onto this fantasy because if it doesn’t become a reality you’re going to hurt again, and you don’t deserve that. Put yourself first, and everything else will fall into place.

Take a second and think, does it hurt to let them go or the fantasy of the person and world you created in your head? It’s always going to hurt to let go of the fantasy because they’re perfect and if it became real for one second, no one would want to let that go. I wouldn’t. Now let reality set in. Reality may have always been there, and maybe you were ignoring it. I have also done that. Reality of things are, maybe this person, this relationship, the situation you were in, was not as perfect as you thought. It happens. Then again, maybe it was just as great as you thought and it just didn’t work out. That happens too.

Remember that if this person wasn’t for you, there is someone else who is and now you’re that much closer to meeting them. Your heart is going to go through a lot, take care of it.

Learning to put my thoughts and feelings into writing. How am I doing?