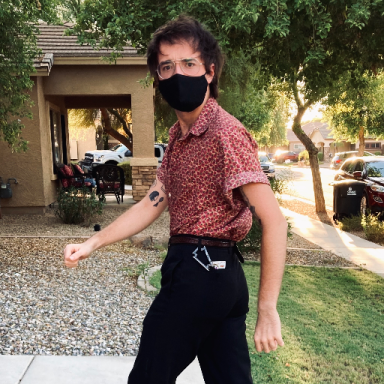 Strange to think there was a point in time when I did not know what a finsta was.

A coworker had pulled me into the staff room to have a look at some photos she took from her weekend out. They were raucous scenes of her wildly dancing’ a table with more than a few lines of coke; a brief clip of her sobbing uncontrollably, an unsavory combination of drool, vomit, and tears coating her face.

I couldn’t help but gawk asking why on earth she had these up on Instagram.

“This is my finsta, dummy!”

A finsta, for those not yet aware, is a private Instagram account where one posts whatever it is they see, feel, or do without reserve. From breakdowns to memes to nudes, if it’s something you wouldn’t post on your “rinsta” (your “real” profile), it is “finsta” material.

After accepting my follow, I went home that night and scrolled tirelessly through her profile. What I found left me unnerved. There were long tirades of her verbally abusive mother, previously unsuspected complications she was having with her fiancé, a heart-wrenching account of suicidal thoughts some months prior captioned to a photo of Peppa Pig.

We’d been working together during all this time. I had no idea any of it was happening.

She and I haven’t talked much since leaving the company we worked for. Not that we need to, though, as we’re both up to date on what’s truly happening in the other’s life. She follows my finsta too.

At first, the content of my finsta was relatively mild. Mostly just silly selfies or blowing off steam after dealing with a rude customer. I had let in a select group of very close friends, but as time went on, I found myself posting to an audience far removed from my immediate social circle. The first was a kind stranger I met at a party. We were drunk and I knew I would never see her again, “but hell, you’re cool, follow my finsta!”

From there, a flamboyant Frenchman I know exclusively from playing on Minecraft servers with. While visiting a small town in northern Arizona, I exchanged finstas with my waiter, learning of a debilitating relationship with his sister and of a large birthmark on his inner thigh all before he even dropped the check.

Dually, I too found myself posting in a far more candid manner. I’d sit every morning with my coffee, bleary-eyed and disheveled, writing a few paragraphs or talking to the camera. I’d backlog funny photos I saw throughout the day so I could caption them later in whatever headspace I found myself in then. And as that headspace became increasingly dark, this routine became a necessary ritual. At my lowest of lows, I’d clutch onto my phone as if it were the only thing keeping me from floating away. Its retreat became a lifeline.

I, like many young people in this country who are in need of it, cannot afford therapy. Especially in the era of COVID, when budget cuts and tight financial situations are leaving countless people without access, the situation regarding public mental health has become even more dire.

My finsta, however, is free. My phone is near always in reach.

As I’ve come out the other side happier and healthier, I’ve been able to observe through my own experience the ways in which this “platform within a platform” fills in for and even parallels conventional mental health care services unavailable to myself and to thousands of other users, the necessity of which cannot be understated.

Something I quickly noticed upon analyzing the finsta is the qualitative homogeneity within its culture. If you take a close look, there really is not much aesthetic deviation from one finsta to the next. Profiles could easily be mixed up if the viewer lacks a body of context for the account holder.

This may be unintentional, but the reason why this occurs is far from inexplicable. Psychotherapy research reports the benefits of familiar environments in achieving emotional release from patients.

A study conducted by the University of Memphis states their participants reported that “the office environment was significant in their experience of therapy. These clients described experiences of safety, comfort, and relaxation as being facilitated by physical attributes of the therapy room.”

Aesthetic cues allow for a more fluid transition into the frame of mind we must be in to comfortably participate in the therapeutic process. What is otherwise far too overwhelming in our day to day becomes approachable through a shift in surroundings. In this way, logging into my finsta is much like walking into a clinic. The act is just as intentional and a similar sense of security is achieved by a setting which is so consistently replicated to an almost laughable degree!

A stress ball on the table, a calming light, a velvet chair.

A funny screenshot, an ironic username, a fake profile picture.

These instantly recognizable attributes give form to spaces with clearly delineated purposes.

So, while finstas remain deeply idiomatic realms where brutal, unabated honesty reigns (as is the case in each individual therapy session), this honesty is achieved by giving access to an arena in which such truth has a frame to exist in. Most of us are unable to achieve great emotional breakthroughs without such a structure. It’s why we seek out help to begin with.

This permission to divulge is granted in part by its design, but it is the audience, after all, which materializes the whole affair.

Let me start by saying that I am not here to diminish the role of the therapist. The work conducted within the field should not be denigrated, and in no way by drawing comparisons between the followship of a finsta and trained psychological help do I wish to equate the strangers who attend to my posts with expertise. But let me reiterate: I cannot afford expertise.

“You learn pretty quickly in the counseling situation that sometimes what clients remember and appreciate was your compassionate listening, your presence as they hashed out problems themselves,” writes Seattle based therapist Michael Schriner. He points out that counseling sessions are more often about, “sharing an emotional space,” rather than, “giving advice.” He, among others in his field, emphasize that most people attending therapy are searching for an understanding, non-judgemental listener, not necessarily someone exclusively to engage with.

This sentiment of the empathetic ear is well documented pre-Instagram (just ask any bartender). But in the context of finsta, it illuminates the reason why therapists (and bars) are these cultural staples of psychological retreat. A certain threshold of anonymity has always been paramount to these modes of self-exposure.

It’s generally agreed upon that a therapist’s personal life should remain separate from a client’s as study after study suggests personal boundaries beget more successful results. That isn’t to say a therapist does not show concern when needed nor do they detach themselves entirely. It’s just to say that it is easier for a client to come to self-realization without feeling concerned by the personality or biases of their psychologist. This same intimacy incognito is essential to the finsta experience.

While there’s no hard data on what I’m proposing, within my own research I found there is a shocking percentage of followship on people’s finstas who are generally unknown to the account holder; in my own case, that number is upwards of 75%.

Of course, this is not to neglect the base of IRL friends which are almost universally present, but especially since March, these interactions remain predominantly virtual. Even without the pandemic in mind, I still ask myself while posting, “Would I feel comfortable telling someone this face to face?” The answer is typically, no. Whether for fear of making a casual coffee chat too heavy or to bypass that awkward period which follows when one must nod politely and smile at the kind but usually unhelpful advice given, it’s exactly these social contracts that make finding spaces to be emotionally vulnerable is so difficult.

So just as it would seem overly optimistic to think a therapist holds a magic answer to my life’s problems, I don’t expect an illuminating dialogue with my followers to transpire either. I’m not posting there to talk to them. I’m posting to be seen by them.

There is a noteworthy phenomenon regarding the leaving of a therapist’s office. It’s common to hear that when reemerging into the outside world it takes a moment to readjust to the “reality” of the public facing identity. After confronting a self we so often neglect, it can feel starkly isolating or even fake to find yourself in the same places you were anguishing over one hour previously.

Not that this is a bad thing. It’s what therapy is for. The true self lies somewhere between our most inner conscience and how it is we exhibit ourselves whilst engaging in social spheres. Our ego is an ever-evolving dialectic and we must learn to settle into this contradiction between the public and private self. This is to say, we contain multitudes—there is no finsta without the rinsta.

Gen Z already has an average of 9.3 active social media accounts. We spend an average of three hours a day on these profiles, but as who, exactly? Portraying ourselves how? Saying or not saying what? My behavior on Facebook, where employers and grandparents are active, is vastly different from who I will be on Twitter, which is vastly different from how I act on my gaming accounts, and so on.

In a time where we can find vestiges of our virtual selves in every nook and cranny of the internet. In an age where identity has never felt so scattered and the terms of human connection so abstract, the finsta has allowed me to reclaim some sense of truth in terms of both my physical and non-physical being.

Not that there really is a clear difference between the two for someone who has never known life to be any other way, but it’s these incohesive yet inseparable entities which highlight the existential crisis of multitudes faced by my generation. The amount of people we have to be is exhausting, and yet the conceptualization and augmentation of our person(s) has become a progressively obligatory prerequisite for being validated as one.

This is why spaces where we can explore the comprehensive individual are more vital now than ever. When everything posted is presented with a filter applied, finsta asks me to unapologetically strip my life of its falsities and cover-ups. It implores me to examine myself in contrast to this world and the wide web of thoughts coiled inside of me. It bears my soul in code.

What more could one ask for from therapy?

After posting, it does feel weird to hop back onto my main. The facade becomes so apparent. But that’s okay. I know that the person who runs both is more sure of himself than he’s ever been. And if I need to vent, cry, laugh, or scream, I’m always one account away.

What Good Is Your Love If I Can’t Feel It?