Ahoy, matey! If you’re looking for some entertaining pirate jokes and puns to use on international talk like a pirate day on September 18th, then you’ve come to the right place. We’ve also included a whole section for pickup lines and knock-knock jokes too. Treasure these jokes and share them with your friend and family! These pirate jokes arrrrrre too good not to share. 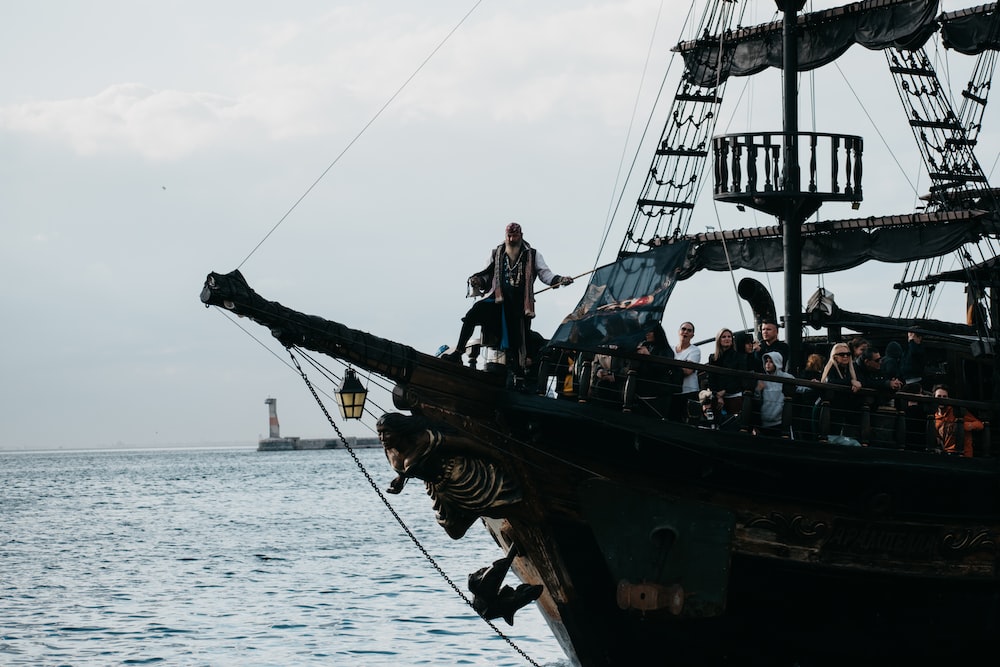 How do pirates know they exist? They think, therefore they ARRRRRRR!!!

What do pirates wear in the winter? Long Johns!

How do you turn a pirate furious? Take away the “p.”

What’s a pirates favorite part of a song? The hook!

Who gets all their movies for free? Pirates!

Why do pirates bury their treasure 18 inches under the ground? Because booty is only shin deep!

What do you call a pirate who steals from the rich and gives to the poor? Robin Hook!

What do you call a stupid pirate? The pillage idiot!

Why couldn’t the pirates play cards? Because the captain was standing on the deck!

How do pirates like to cook their steaks? On a BAAAARRRRRBECUE!

What happens if you take the p out of a pirate? He becomes irate!

What’s orange and sounds like a parrot? A carrot.

How much did the pirate pay for his peg and hook? An arm and a leg.

Why is pirating so addictive? They say once ye lose yer first hand, ye get hooked.

What’s a pirate’s favorite letter? You’d think it would be arrr, but it’s actually the C!

What do you call a pirate with three eyes? Piiirate!

Why did nobody want to play cards with the pirate? Because he was standing on the deck.

Why are maths teachers secretly pirates? Because they’re always trying to find X!

Why does it take pirates so long to learn the alphabet? Because they can spend years at C!

How did the pirate find out he needed glasses? He took an aye exam!

What did the pirate wear on Halloween? A pumpkin patch.

Why are pirates called pirates? Because they arrrrr!

What does the pirate say when his leg gets stuck in the freezer? Shiver me timbers!

What did the pirate say when he became an octogenarian? Aye matey years old!

How much does it cost for a Pirate to get his ears pierced? ‘Bout a Buccaneerrrrr( buck an ear)

What did the first mate see down the toilet? The Captains log!

Why’d the pirate go to the Apple store? He needed a new ipatch.

What is a pirates favorite doll? BAAAAARRRRBIE!

What did the ocean say to the pirate? Nothing, it just waved.

How do pirates prefer to communicate? Aye to aye!

Where can ye find a pirate who has lost his wooden legs? Right where ye left him.

Why couldn’t the 12-year-old see a pirate movie? It was rated RRRRRR.

Why don’t pirates go to strip clubs? Because they already have all the booty!

Why did the pirate buy an eye patch? Because he couldn’t afford an iPad!

What do ye call a pirate with two eyes and two legs? A rookie.

Why did the pirate cross the road? To get to the second-hand shop.

Why don’t pirates shower before they walk the plank? Because they’ll just wash up on shore later.

What does a dyslexic pirate say? RRRRRRA!

A pirate goes to the doctor to have the spots on his arm examined. The doctor says: “They’re benign.” The pirate replies: “no, no doc, there be 11. I counted them before I came here.”

What do you call a pirate who likes to skip school? Captain Hooky!

How did the pirate get his Jolly Roger so cheaply? He bought it on sail.

What’s the difference between a hungry pirate and a drunken pirate? One has a rumbling tummy, and the other’s a tumbling rummy.

A pirate walks into a bar with a big ships wheel down his pants. The bartender says, “Excuse me, sir, but do you know you have a ship’s wheel down the front of your pants? The pirate replies, “Aaargh, it’s driving me nuts!!”

Why does a pirate prefer to drink in a bar that serves rum, instead of gin? Because it has mo’lasses.

What does the pirates say to motivate each other during a race? Rum bottle, RUM!

A pirate comes into his favorite bar after a long time away at sea, and asks for some rum. The bartender says sure, but asks “Why do you have a peg leg?” “Ah, that, a cannon ball took it off and our doc’ wasn’t able to save it” The bartender then asks “Why do you have a hook for a hand?” “We were slaughtering the sailors of the ship we were salvaging, and one got a lucky slice in”. The bartender then asks “And why the eye patch?” The pirate says “The captain’s damn parrot shit in it” The bartender asks “How can bird shit take your eye, did it get infected?” “Nay” says the pirate “Twas the first day with the hook.”

How much rum does it take to make a pirate drunk? A Galleon.

What did the pirate say to his mate when his rum was stolen? “Fuck you that’s mine.”

Pirate Jokes As Pick Up Lines

Yo ho ho! I’ve got a bottle of rum and a penchant for making drunken mistakes.

Can I help making your roger a little more jolly?

Permission to fire my cannon through your portholes?

Aye, Pirate! Is that a hornpipe in your pocket or are ye happy to me?

I know where you can bury your treasure.

Let’s head back to me ship and rock the boat.

Your Jolly Roger ain’t the only thing ye’ll be raisin’ tonight.

Care if my parrot watches while ye board me ship, matey?

Long ago, when sailing ships ruled the waves, a captain and his crew were in danger of being boarded by a pirate ship. As the crew became frantic, the captain bellowed to his First Mate, “Bring me my red shirt!”

The First Mate quickly retrieved the captain’s red shirt, which the captain put on and led the crew to battle the pirate boarding party.

Although some casualties occurred among the crew, the pirates were repelled. Later that day, the lookout screamed that there were two pirate vessels sending boarding parties. The crew cowered in fear, but the captain, calm as ever, bellowed, “Bring me my red shirt!”

Once again the battle was on. However, the Captain and his crew repelled both boarding parties, though this time more casualties occurred.

Weary from the battles, the men sat around on deck that night recounting the day’s occurrences. An ensign looked to the Captain and asked, “Sir, why did you call for your red shirt before the battle?”

The Captain, giving the ensign a look that only a captain can give, exhorted, “If I am wounded in battle, the red shirt does not show the wound and thus, you men will continue to fight unafraid.”

The men sat in silence marvelling at the courage of such a man. As dawn came the next morning, the lookout screamed that there were pirate ships, 10 of them, all with boarding parties on their way.

The men became silent and looked to the Captain, their leader, for his usual command. The Captain, calm as ever, bellowed, “Bring me my brown pants!”

We hope you enjoyed these pirate jokes!

I Once Went On A Date With A Pirate (Sort Of)