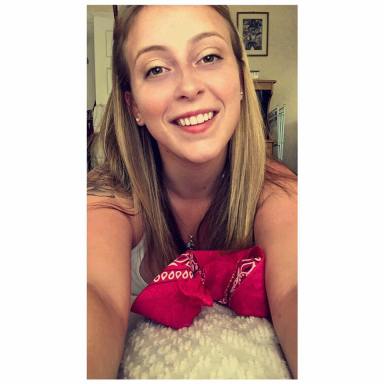 For most people, college is scary. It’s overwhelming, it’s a whole new chapter in their life. It’s hard to move away from your parents, your friends and your hometown. It’s terrifying to venture out by yourself, and learn how to live on your own. From living with a family to having your own responsibilities of cleaning, cooking, laundry and much more, it is a big change. But for most people, college also brings with it excitement. It is a place to start over. A new life, with new people. A place to reinvent yourself, and to discover new passions. College was both of these things for me. But then you add in a disease that I still don’t have under control or completely understand (and I don’t know if I ever will), and that just adds in a whole new layer of anxiety about college. Moving to college and adjusting to it was tough, but getting my Crohns to adjust was even tougher.

Freshman year I moved into my dorm at Simmons College. I’m from Everett, MA, so moving to Boston didn’t seem like such a big deal. I felt excited, and couldn’t believe that I was old enough to be living on my own. I knew I would miss my family and my friends, but college had advertised so many different possibilities, that I couldn’t wait to get started. I ended up hating freshmen year. I made friends, and I loved my roommate. My classes were interesting, and I even joined some clubs. But I hated it. The switch from high school at home to college was no joke: the workload increased like crazy, the dorm life never offered any privacy, and doing things like laundry were harder than I expected. I would get sick a lot because of the stress, and I couldn’t figure out a way to explain to my friends what exactly was wrong.

Crohn’s is often associated with a gross stigma, because it is a stomach disease, and hey, shit doesn’t smell like roses. I found myself sugarcoating my symptoms, saying that Crohns just made me tired a lot and that I would occasionally get stomachaches, hiding the fact that five minutes after every meal I would end up sick in the bathroom. Embarrassed to the point that I would run downstairs from the third floor every half hour to use the private restroom. I couldn’t do things that my friends could. I didn’t have the energy to go out and party every weekend, I couldn’t sip on the horrible beers we were served at frat parties without having to throw up. I hid these symptoms, trying so hard to blend in and be normal, and becoming miserable in the process. I ran home a lot, to my family who understood what my disease was. I hated college.

Then, the second semester of freshmen year, my friends and I decided to head to Southie for the St Patrick’s day parade. We stayed out all day, partying and goofing off, living the life of a Boston college student. The next morning, I woke up throwing up blood. Scared as hell, I called my mom and she rushed me to the doctors. I was admitted for about a week, and the GI team performed many tests. I was having a Crohn’s disease flare up. That week in the hospital was completely miserable, but it opened up a door for me. I realized I couldn’t really hide my disease anymore, that it was a part of who I am. As much as I hated its symptoms, they couldn’t be ignored, or sugarcoated. Crohn’s disease is serious, and I realized that the hard way. It was time to come clean and explain the extent to which this disease ran my life. I opened up, and I explained how Crohn’s affects me, and I finally became more comfortable with it.

Now, almost two years later, I am beginning my junior year of college. I am a proud advocate of Crohn’s Disease, and have raised a lot of funds through programs such as Take Steps and Team Challenge. All of my friends know about my disease, and they respect it. I’m not embarrassed anymore to say “Hey guys, my stomach’s killing me, I’m going to stay in tonight”, or “Hold on guys, I need to run to the bathroom, Bartol dinner went right through me.”

I’m not uncomfortable to talk to my professors, to let them know that I will need to leave class often to use the bathroom, and that some days I won’t even be able to pull myself out of bed for class. Of course, it still sucks that I am more restricted than my friends, and that I never seem to be able to do everything they can. But, it’s getting better. Crohns has forced me to grow up quickly, and to become my own advocate. As I am writing this, I have been in bed all day because I was up all night throwing up. But unfortunately I can’t sleep anymore. College keeps moving no matter what disease you have, and I have a huge load of homework to get done. Crohn’s is part of me, and I have fought to get it under control, and to be able to do all of the fun college things that I want to. I have a great group of friends here, and I have my family at home. I lucked out with two amazing support networks.

Keep up with Samantha on wordpress.com