Robert Yune is the author of Eighty Days of Sunlight (Thought Catalog Books). He works in a Gothic cathedral ...

We’re fortunate to live in an age where Viet Thanh Nguyen wins the Pulitzer Prize in 2016 and where our literary scene can include stories that revise or even challenge the “immigrant narrative” that for years had dominated the conversation.

Stillness is dangerous in a novel: when a reader senses a dip in energy or motion, he or she often starts to disengage from the story.

When I was eight, my mother would praise every piece of art I brought home. It didn’t matter whether I spent hours gluing macaroni on cardboard tubes or seconds slashing paint across construction paper.

In this series, I’m reading Celeste Ng’s blockbuster debut novel Everything I Never Told You and discussing literary techniques I notice in each chapter.

Bottom line: we don’t feel the need to do something just because it’s trending in Manhattan.

In books, as in real life, it can be exciting to disobey, trespass, and eavesdrop.

In undergrad (and even in grad school), we were admonished never to begin a story with a character waking up or starting their morning.

Robert Yune is the author of Eighty Days of Sunlight (Thought Catalog Books). He works in a Gothic cathedral skyscraper in a city that receives eighty days of sunlight a year.

As a Navy brat, Robert Yune moved 11 times by the time he turned 18. In 2008, he received a writing fellowship through the Pennsylvania Council on the Arts. In 2012, he was a finalist for the Flannery O’Connor Award and was one of five finalists for the Prairie Schooner Book Prize, selected by Sherman Alexie and Colin Channer. His fiction has appeared in the Kenyon Review, Avery, and The Los Angeles Review, among others.

Yune teaches at the University of Pittsburgh. During the summers, he has worked as a stand-in for George Takei and appeared as an extra in films such as Me, Earl and the Dying Girl and the forthcoming Fathers and Daughters.

Yune’s book Eighty Days of Sunlight was nominated by the Carnegie Library of Pittsburgh for the 2017 International DUBLIN Literary Award. Other nominees include Jonathan Franzen, Margaret Atwood, Isabel Allende, and Lauren Groff. 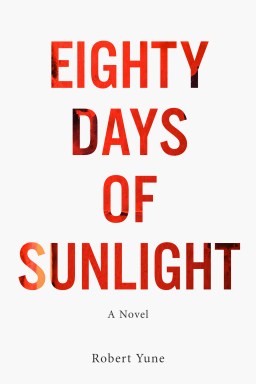