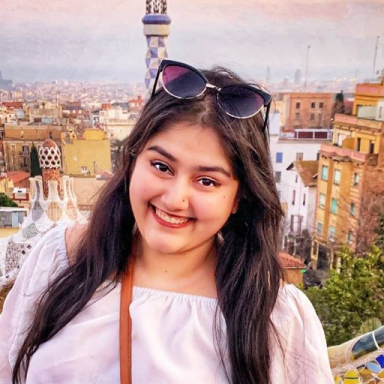 When did I first experience racism, you ask? There was a girl in first grade who danced around me in a circle doing a Native American impression. I didn’t know how to control my confusion or rage. I was six. My memory is a little more hyperbolic than most, but I remember I did what any six-year-old who had to confront her identity at a fragile, normative age would do and grabbed that white girl’s pigtail and tore it clean off of her stupid head.

But what I know now is that that memory wasn’t my first racist experience at all. What you don’t know at that age is that microaggressions take hold even when you are a dumb little kid who doesn’t even do anything. I, like many other brown girls in the ‘90s, would play with our white and blonde barbies and always wonder why none of them looked like me. My poor parents had to explain why it wasn’t a bad thing that I didn’t have yellow hair. I didn’t believe them, of course. I could never be Cinderella for Halloween. I would never find “Priya” written on a keychain in a sad souvenir shop. I wouldn’t get cast as Annie in our middle school musical (not for my absolute lack of talent or anything). The closest I got to representation in movies or TV was a Black girl. So, like many brown girls, I turned to Bollywood.

And Bollywood sucked. Yes, I know every scene in Kuch Kuch Hota Hai. But let’s be clear, ‘90s Bollywood was the epitome of awful storytelling and misogyny wearing the skin of nostalgia. At the time, I didn’t see girls like Kajol anywhere but the brown silver screen, so I worshipped it.

In high school days, I talked about that hair pulling memory with pride. Like I was the Batman for racism.

At the same time, I exploited my model minority shit HARD. I crushed it at school. I worked hard because people expected great things from me and paved the way to my success. Yes, I earned it, but I just didn’t really have to fight that hard to convince people I was smart or worthy of respect. It was a self-fulfilling prophecy and all I had to do was show up and put some effort in. I can resent white people all I want, but the truth is, I basically only had it a little harder than them.

I grew up in a pretty liberal part of Michigan. In middle school, me and some girls from my Bengali community did a Bollywood dance performance for a talent show and the white people loved it. I felt so fucking validated. Like YES, this is what Harry Potter books were talking about. Be special. Be you. People will love you for it. Being extraordinary is better than being normal. It’s cool to be Indian.

That same summer, jute bags, bangles, flowy skirts, and kurtas were the ultimate fashion statements. And I was like YES, FINALLY. All the shit I can get in India for like 10 rupees is gonna make me cool in America.

What I didn’t know was every action I took to be a model minority was validation for the white people around me to appropriate my culture. While we as Indian-Americans craved acceptance through normalcy, liberal white society craved benefits from “the different.” This was so deeply embedded in me that up until a few years ago, I really didn’t fully understand why people would get so mad about cultural appropriation. In my head, I was like,”America is a melting pot. We get to experience other people’s cultures respectfully here! Where else in the world can you get tacos for lunch and then go celebrate Chinese New Year at the civic center? Without sharing each other’s culture, we won’t ever grow and learn! I’ll never get to eat Ethiopian food and shovel my face with injera.”

I was sheltered by the fact that white people get to do the deciding. They decide if bangles are cool. They get to eat samosas and then tell you that they are sooo spicy. They decide it’s cool to wear bindis as a fashion accessory. They get to open profitable yoga studios and make it unaffordable for brown people to practice there. They get to do all the things that make you special because in exchange, you get what you crave the most—their acceptance.

What they fail to mention is that while they are smiling and telling you that you are special, they know that you are only special if they decide it.

So yeah, I gave my peers henna tattoos and was happy knowing that it was a small price to pay for equality.

You can imagine how pissed I was when I was applying to colleges. I was so upset that so many of my white classmates didn’t have to work as hard to get into schools that I wanted. I was mad that if I weren’t Indian, I probably would have gotten accepted because schools wouldn’t have already filled their “Asian” quotas. Again, like my middle school production of Annie, I will always question whether or not I actually didn’t deserve it or if my race played a factor.

Either way, I had to come to terms with the harsh reality that I was never on the same playing field as white people because they aren’t my competition. My worst fears had become reality: My parents were right—my competition was other brown people.

I think over and over again that’s how white people trick brown people. Like, legit, Pakistan wouldn’t exist if that weren’t the case. Instead of being like, “We should be mad at the people who oppressed us and didn’t liberate our motherland until 1947,” Indians were like, “NAH, Muslims the wrong kind of brown.”

And then when Brexit or the Oprah/Markle interview happened, people were actually surprised?! We’re talking about the nation that is responsible for why literally every country has an “Independence Day.” You are shocked that those people were capable of being xenophobic?

Similarly, in U.S. History, we learned that slavery was abolished and racism was a thing of the past. The KKK is taught like it’s an organization demolished centuries ago, when the truth is the third Klan exists TODAY. How is that even fucking possible, you ask?

I’ll tell you how. Because I fell for it too. We won two world wars against Nazis and thought all the Nazis were gone. I was stupid and didn’t understand that when you win a war, you don’t actually win. The bad guys don’t explode like in Power Rangers. They still exist. They go to school with you, work beside you, and systematically influence every decision in your life. Because when Nazis lose a world war or two they don’t just STOP BEING NAZIS.

I used to think my generation was obsessed with not being cliché. I did SO MANY things to make sure I wasn’t cliché. I essentially revolved my life around it. I didn’t drink till I was 21. I didn’t become a doctor lawyer or engineer. I wasn’t a bigot. I thought my generation was just over doing what people expected them to do and paved a path differently than the generations before them.

The rude awakening for me was when the Chads my age started waving tiki torches shouting “white lives matter” in the streets. I. Was. Thrown. Assholes I probably sat next to in classes were out their marching with their Polynesian props around the streets of Charlottesville defending their superior race. My age. It was easy to blame the broken generations before me for our problems, but to see it perpetuated by my own generation sickened me, mostly because I thought we were beyond that. And yet here were throngs of white men determined and ready to repeat the darkest parts of their history.

I’m not hating on my hometown, but more and more I feel like my parents and I got scammed. Like white people got to tell us that we were the “good ones” and we got to thrive in their selective neighborhoods. And then we grew up and realized every day that our successes were only as long of a leash as white people let us have. All my life, my parents always moved into “good neighborhoods,” which to them meant “white neighborhoods.” What brown people haven’t understood for centuries is that white people are scary as shit. Even now, I’m living in my first home. My parents sleep relieved knowing that I have a block full of white neighbors looking out for me. But this is the same neighborhood that last summer had white vigilante Nazis running through it with baseball bats ready to “protect their city.”

I feel like the reason the Black community doesn’t have every minority working together as an unstoppable force is because minorities just don’t see white people for the REAL threat they are. WHICH IS SO FREAKING DUMB because at one point in history THEY OWNED US. And now it’s 2021 and we have Stockholm syndrome and refuse to be a better ally for our previous captors’ current victims. Things need to change. We need to change. And it starts by acknowledging that white is not synonymous for good. We need to understand that it’s not enough to just shake our heads and feel bad when Black men and women get murdered in their homes and in the streets. We need to start rejecting white people’s acceptance of us and demand recourse for their atrocities against the Black community.

I named my dog Albus Severus