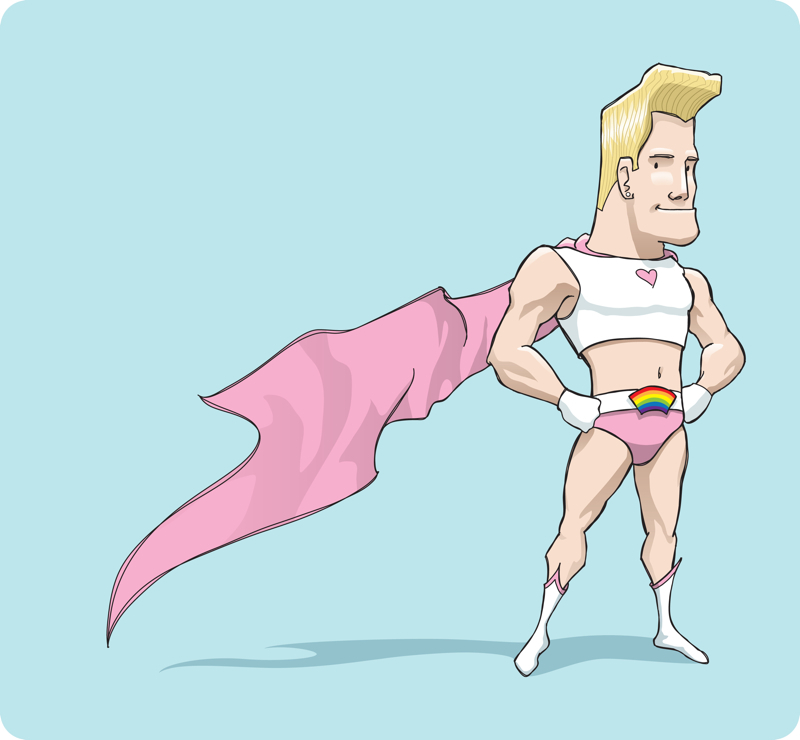 Homosexual: sexually attracted to people of the same sex.

Homophobia: irrational fear of, aversion to, or discrimination against homosexuality or homosexuals.

When I was 12 years old, these words meant nothing to me. All I knew was what I heard from the old guard, the ancient stereotypes that our forefathers forged in the brains of many generations to come. And there I was in a room, with a homosexual male, all by myself. My father needed to go pick something up from the hardware store, and his girlfriend at the time was friends with this guy. He was taking care of me for the next 30 minutes, while they went pick something up. I was scared, nervous. In my mind, he was going to take advantage of me. How could my father leave me with this depraved being? Over the next 30 minutes while I was a nervous wreck that was questioning his father, this gay man fixed me something to eat, put on the show I wanted to watch, and just made very funny comments. I laughed, talked, and ultimately changed. Changed because I realized how ignorant those beliefs were. And I was impressed, that my father, who seemed like a throwback to 70’s porn movies at the time, was so accepting. I realized that day that in all honesty these “beings” were just human beings. Same pains, emotions, same laughs, same rights. Right?

Now I am 30 years old, and I’ve seen the world spin around plenty of times. In this day and age of extreme yearly technological leaps, every type of activist movement has had a forum to spread information. Yet homophobia still exists, and it’s prevalent in almost every state or country. How? And I’m not talking about just male, I’m talking about the complete and uniquely terrible stigma lesbians carry. It’s hard to exist when you supposedly hate men, which is the only reason you are doing it so you re just a horrible wench to everyone because they took your happiness. What? These stereotypes which turn into beatings, rejection, and ultimately manmade misery are still being enforced by groups of people afraid of losing the control old ways gave them. These myths which are constantly thrown at us are as general as the stereotypes given to different ethnic groups. And just like those, they come from common behavior from years past and from some part of the community not the whole of it. It’s time to let go of those and find a way to accept that everyone should have the same honor to have the same rights, respect, and opportunities for love that we all enjoy. Here are the major myths I’m talking about.

I was at a corner store the other day picking up some late snacks after work, when a man was telling the counter person how that “faggot” gave him a look. Like the man in question was about to get raped. He proceeded to throw out every slur his limited vocabulary could muster. He was in his forties, had a shape-up beard, baggy pants, a blue-tooth in his ear, and a face that showed not only the years, but the abuse. Yeah, I doubt that man I saw leaving, who looked like a model wanted you, man. Guess what? They have taste, they have types, and they love to be treated nicely. Chances are he didn’t look at you because you were a male, but because you were bragging how you cheated on your wife and were complaining about how your mistress wanted money. Maybe focus on being a better person. Oh and take that damn blue-tooth out of your ear if you are not in your car.

2. All Lesbians Are B*tches

You enter a bar and see a couple of plaid wearing girls in a corner exchanging affections beyond those of bff’s. Oh No! They are just going to throw shade at you for being a man, or because of being too feminine of a woman. If it weren’t for the fact that some of my favorite people in the world, (which are the most fun, feminine, and loving) are lesbians maybe I would think the same. Actually not, I like to think only idiots think like that.

You know that friend of yours who came out as being Black, and you can’t understand. Don’t worry, it will pass, he’s just finding himself. You know that girl that came to terms that she’s Latina, don’t worry she will be Caucasian again. You hear how ridiculous that sounds?

This one is directly connected to the one before. I have heard many religious people condemn homosexuals because they chose to commit sin. First of all, love is not a SIN. It’s not now; it’s not ever. It’s an emotion everyone should be able to bask in however they like. SO whether it is a choice or not, is irrelevant. But for most people to understand, it is not a choice. It is not a disease. It’s a life, and you should care and respect it as you do with others.

5. They Are All Promiscuous

They’re not more or less of sluts than the straight men that go to club to pick up the girls that want to get picked up. Most people love sex. Most people enjoy their younger years however they like, yet somehow gays and lesbians are far worse. Nope, you are just trying to make yourself feel better bout your increasing number one night stands. You are a whore. Wait, you don’t like being judged? Neither do they. And I’ve met many gay couples that have been together for years, and can write you a manual on how to have a beautiful relationship.

Somehow for some people, gay men are so weak you can beat them in a fight by swatting them. They can’t carry anything. They can’t do what straight men do. Like the moment they come out of the closet, their strength leaves them, and they become mush. I mean, this is the same mentality that says women can’t do the same things men can. Or as important of things, because giving birth alone is not enough show of strength. I do not condone violence, but a little part of me is happy every time I see a gay men drop an ignorant fool. Not the best way of showing strength, but, sadly, it’s the only one some people understand.

It’s like it is a virus that makes them unable to do regular human things when they accept themselves as part of the LBGT community. I’m going to tell you a secret that will make it easier for you to accept that stroller being driven by two people of the same sex: They have the same capabilities that they had when you didn’t know they were gay. Yeah! Mind-blowing right? Lesbians can give birth, and Gay men can change diapers. You don’t have to go to college to know how to raise a kid, you just have to love and learn just like everyone else.

My friend Ricky is a huge Buffalo Bills fan that hasn’t worked a Sunday ever thanks to Sunday Night Football. My Friend Jason throws parties every Sunday. My friend Chris is a handyman who I call from time to time to learn how to fix stuff around the house. My friend Tiffany is one of the most sought out women I know in my circle for fashion advice. My friend Olivia is a feminist whose dresses and makeup will put anyone close to her to shame. They don’t know each other, but they all have something in common and being straight is not it.

9. They Will Corrupt You

This one is straight out stupid and makes you look completely ridiculous. Hanging out
with gay men is not going to change you. Letting a gay babysitter take care of your kid is not going to make him homosexual. Chances are you just need to accept something inside of you if you feel like he has that power. If you think this corruption really happens, that just shows how mentally weak you truly are.

10. They Don’t Deserve The Same Levels Of Respect

Everybody in this world is deserving of a blank slate when they are born. In that case, everyone should have the same chances to live life however they want without judgement or hate. Apart from social issues, classes, or ideas that differentiate us, we all are susceptible to similar emotions and experiences. SO my question to you is: What makes you better than those different than you? What makes your love more valid? What makes your hate matter? And most importantly, why do you care? Why do you care what other people do? Why do you want to hurt them by not allowing them to be who they are? They are people they have blood in their veins that pumps their heart.

The problem is, they have to think about hiding themselves because we as a nation still have a lot of growing up to do. Because we aren’t mature enough to accept something that is older than all of us. Something as human as eating, as emotional as crying, as common as breathing, yet we make it into a reprehensible act because most don’t understand it. Refuse to understand it, actually. It’s not rocket science. They are your neighbors. If you believe in God, he tells you to love your neighbor. If you don’t, that doesn’t change, you should love your neighbor. Or at the very least, recognize that as HUMAN BEINGS they deserve the respect you give others. Your world will be a lot better when you let go of that inexplicable hate. Believe me.