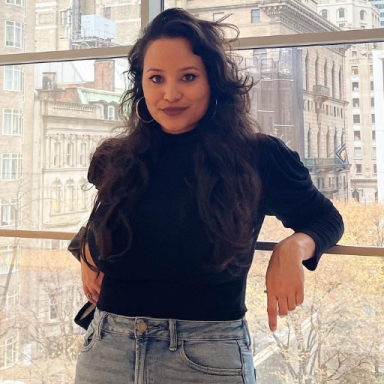 I remember my father arguing with my mother about buying me more modest clothes. He’d tell her I was wearing things that were much too provocative and my mother would tell him to calm down because I was still a child. I get it, he was just an overprotective (and old-fashioned) father. And it’s true, from the moment you grow breasts men can come to sexualize and objectify you, but I never quite understood why the blame should be placed on my body.

Men have been staring since I was 11. I had a little waist that dipped in and then gave way to hips too mature for my age. My then C cup breasts came in seemingly overnight. I remember being in the bubble bath one day and looking down and wondering what world I woke up in. I was out of a training bra, shopping for a real one with support and underwire for my much too full breasts, while all my friends were still stuffing theirs. I remember them asking me what it felt like, telling me how lucky I was and how jealous they were I got attention from all the boys, I’d laugh and say, “I know, rightttttt.”

The truth is, from the time my boobs came in, I’d spend my whole life wishing mine were a size closer to theirs.

I wasn’t a woman yet, but I might as well have been.

I learned at a young age that men always wanted something from you. That they’d rather their fantasy of you, than who you actually are. That a lot of them are only interested in one thing, but it only makes them easier to manipulate. The easiest way to take the power from someone is letting them think they have the power.

And I did. Manipulate men. Make them think I wasn’t privy to their intentions. I figured if they wanted to dumb me down to their false idea of me, if they wanted to reduce me to a literal pair of chunks of muscle and fat, if they wanted to cop a feel more than try to get to know me or ask me a question about literally anything, then I’d (no pun intended) milk them for every cup.

They stare at me today, still. Look at my DDD’s, sometimes F’s, like they’re going to find the the Philosopher’s Stone in my cleavage somewhere. I want to ask them if they’ve lost something there or what they think they’ll find. I’m so numb to it, that sometimes it doesn’t even faze me or I won’t even notice it. Sometimes, though, it’s all I can notice, and I want to tell them to stop looking at my chest like the only tit they’ve ever sucked on has been their mother’s.

So, okay, I get the fascination, they’re fuller than full, they’re big, they’re firm, and they’re perky. Since I grew them, my mother made me adopt the habit of rubbing cocoa butter or almond oil on them and massaging them. She said it would avoid the stretch marks and help fight gravity. But it would be nice to go on a first date without the guy spending more time talking into my chest than making eye contact with me. I shouldn’t have to cover up in order to avoid this. It would be nice to get a text telling me I am beautiful, that I have pretty eyes or that I am a talented writer, instead of alluding to my boobs. I would love for a man’s idea of wooing me not to include commenting how big my boobs are. I know this, I look in a mirror and carry knots on my back because of their weight every day. It’d be great if someone trying to make me cum spent less time squeezing my boobs like stress balls and more time focusing on my clit.

I couldn’t tell you the number of times in my life I’ve been referred to as the girl with the big boobs. Even my friends, who I know meant no harm, would make comments about them, even calling me names like Tits or Boobie, with no idea how much it bothered me. I hated my breasts. I thought they were disgusting. I almost went under the knife at 21 because I wanted nothing to do with them.

They became an insecurity of mine over the years. I can’t wear cute and skimpy bralettes. I feel so fucking unsexy in a bra that has a cup almost the size of my face. It’s hard to find bras that can pass as even remotely alluring, not to mention the fortune a sexy bra can cost. Bikinis that work are nearly impossible to find, and when I do, it’s another fortune. I thank the fashion gods everyday that one-pieces are back in style. Forget peek-a-boo tank tops. I can’t pull off just any neckline. Then there’s that little idea society has put into my head that I have to wear a bra with everything.

For a while, I was almost ashamed of them, I hated them, I tried to hide them and wear “appropriate” things for my chest. It wasn’t just because of their size, or because they made me feel bigger than I am, but because somewhere along the way, I got it into my head that they were the only thing that I (no pun intended) brought to the table.

I thought being pretty and having certain tempting physical assets meant having to satisfy. I thought being wanted meant having to give. But it was never me they wanted. I learned it the first time I ever took my shirt off for a boy, the second, the third. I knew it deep into my 20’s. But still, I set myself up for disappointment, and sometimes even heartache, because I hadn’t learned, even as an adult, that I could be the one doing the choosing. I had become brainwashed into believing that a man’s desire of me was to be blamed on me. I’d become apologetic for having no interest in someone, for not wanting the same thing, for shattering whatever illusion they had of me with the real thing, sometimes even for being myself. So, when they placed my value on what they saw in me, or on what I could give them, I mistakenly did the same thing.

I’m not special, in the sense that all women have struggled with something similar. We all have something about ourselves we haven’t always been comfortable with, or we have wished we could change, an insecurity, big or small. We’ve all wished we would have gotten attention for reasons other than what we did. We’ve all had men try to measure our worth by our physique or by what we could literally place in their hands, somehow. We’ve all felt used at times.

No breasts, no butt, no stomach, no arms, no waist, no hips, no matter how big or how small, overshadow or define who you are. No matter how much anyone, even yourself, wants to make you believe otherwise. When people make you feel like you can only offer one thing, it’s usually because they have nothing to offer. When they make you feel unworthy, it isn’t you with the shortcomings.

These days, my boobs and I are living our best life. I’ve burned bridges with men that lack depth or who don’t like me for me. I’ve burned my bras on some weekends. It’s been quite liberating. I’ve let my breasts run free. I wear what I want, without worrying about what anyone might think, being ogled at, or getting the dirty eye from some chick in the bathroom. I’m still rubbing almond oil on my boobs every night, only now when I do so and look at myself in the mirror, I don’t wish I had the chest of someone else. It’s still a struggle to be comfortable in my own skin some days, but as awfully stupid as it sounds, if there’s anything that my boobs have taught me it’s that you got to love yourself.