THE DENIAL OF DEATH BY ERNEST BECKER 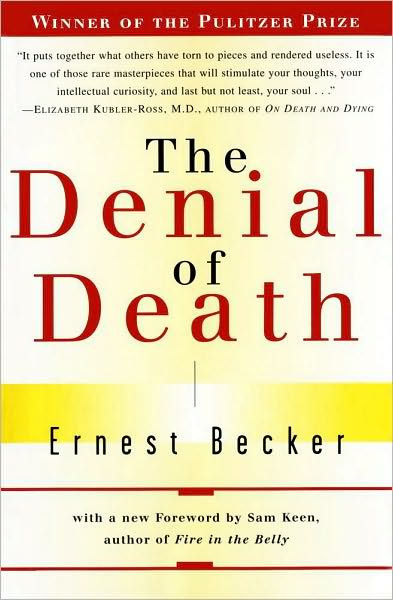 What It’s About: Speaking of being afraid of dying… Here’s The Denial of Death in a nutshell:

In other words, humans were given the gift of being able to imagine the future and who we want to be, but the price we pay for this gift is the realization that we will one day die. A dog doesn’t realize she’s going to die. Neither does a fish. Or a roach. But we do.

This knowledge of our own inevitable death leads to a kind of ever-present “terror” that underlies everything we do. Becker argues that this terror inspires us all to take on what he calls a “hero project,” where we attempt to immortalize ourselves through our deeds and actions, to create something bigger than ourselves that will live beyond our own lives.

It’s when people’s hero projects contradict one another that we get conflict, violence, bigotry, and evil. It’s when hero projects fail that we fall into deep despair and depression because we’re once again confronted with the inevitability of our own death and meaninglessness of our lives.

Man cannot endure his own littleness unless he can translate it into meaningfulness on the largest possible level.

The irony of man’s condition is that the deepest need is to be free of the anxiety of death and annihilation; but it is life itself which awakens it, and so we must shrink from being fully alive.

What does it mean to be a self-conscious animal? The idea is ludicrous, if it is not monstrous. It means to know that one is food for worms. This is the terror: to have emerged from nothing, to have a name, consciousness of self, deep inner feelings, an excruciating inner yearning for life and self-expression and with all this yet to die. It seems like a hoax, which is why one type of cultural man rebels openly against the idea of God. What kind of deity would create such a complex and fancy worm food?

Bonus Points For: Making you contemplate your own non-existence and kind of making you feel okay about it.

If This Book Could Be Summarized in An Image, That Image Would Be: The grim reaper silently laughing to himself watching you build an elaborate Lego set called “Life,” and you turning around and saying, “Stop laughing, this is important!”