ANTIFRAGILE: THINGS THAT GAIN FROM DISORDER BY NASSIM TALEB 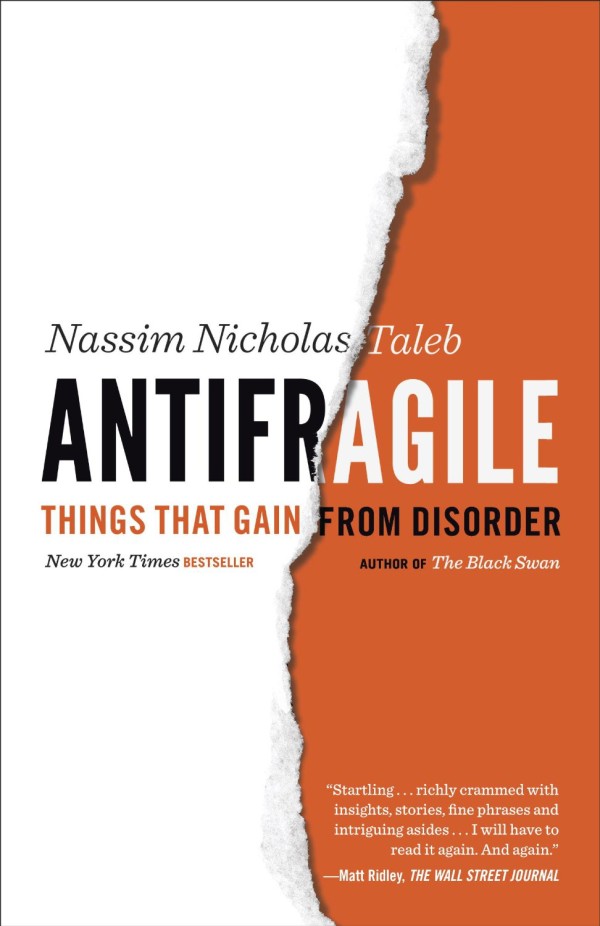 What It’s About: Before I explain a few of the brilliant ideas in this book, I need to get something off my chest: Taleb sounds like a pompous dick. If he’s trolling the world with his writing style, he’s doing a good job, because some passages are almost impossible to get through without either rolling your eyes at him or shoving the book through a paper shredder. If he really is this arrogant, well, then let’s just say he won’t be invited to any of my playdates any time soon.

Taleb has a handful of amazing ideas. I’m talking potentially life-changing, world-affecting ideas. These ideas can be explained well in about 50 pages. The other 450 pages are mostly him trying to prove how cool and cultured he is while explaining how much smarter he is than the following groups of people: academics, politicians, Nobel Prize winners, Wall Street analysts, economists, journalists, statisticians, historians, soccer moms, teachers, anybody who uses the bell curve, anybody in the social sciences, and anyone who disagrees with him.

So what are his handful of earth-shattering ideas in Antifragile? Well, here’s the starting point:

If that tweaks your nipples and you don’t mind putting up with pages upon pages of pretentious meandering, then go nuts, Taleb is for you.

Antifragility is beyond resilience or robustness. The resilient resists shocks and stays the same; the antifragile gets better.

The irony of the process of thought control: the more energy you put into trying to control your ideas and what you think about, the more your ideas end up controlling you.

Difficulty is what wakes up the genius.

Bonus Points For: Being a totally insufferable asshole. And wrong about tons of his analogies and examples. But still brilliant somehow, despite himself.

If This Book Could Be Summarized in An Image, That Image Would Be: Some fat, rich bald guy boring you to death over cappuccinos with inane stories about living in France and smoking skinny cigarettes with Umberto Eco while you stab yourself in the face with a sugar spoon repeatedly trying to make it all stop.