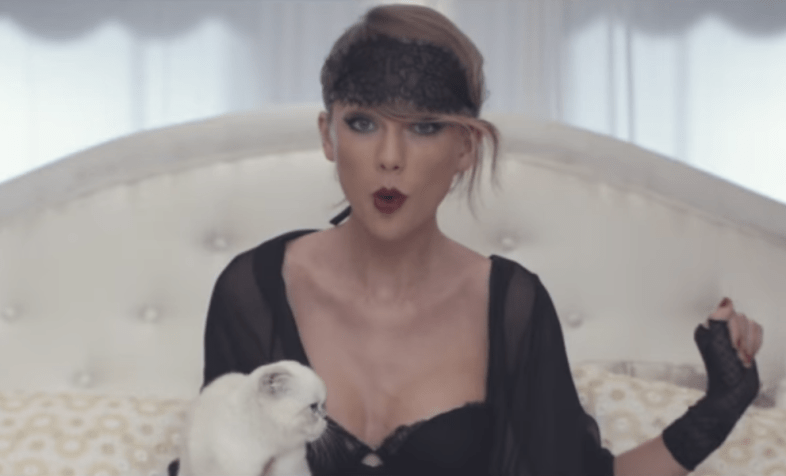 In September, I wrote an article about popular music in 2004 vs. popular music in 2014. One of the categories was “post-innocence pop-star,” in which 2004 Britney Spears was matched up with ’14 Taylor Swift. I gave ’04 Britney Spears the edge over ’14 Taylor Swift, mostly because any sort of ranking/matchup on the internet is generally determined by an arbitrary person who probably orders something different than you at Starbucks. But also, I figured that Britney is a cultural icon unto herself; and at her peak, it’d be nearly impossible to bring her down.

Two months later, saying that Britney Spears’ 2004 was better than Taylor Swift’s 2014 seems almost laughable. Taylor has clearly exceeded her own phenomenon — her album is dominating the music industry in a scarily impressive manner [1], and seems to be redefining her image and career narrative in the process. Taylor Swift is undoubtedly one of the most influential cultural icons today, and in my personal opinion, is amongst one of the “best” [2] our world has to offer. With that, here are seven (awesome) things about Taylor Swift:

1. Most People Explode When They Are That Famous

We like to classify fame by various lists — you’re on the A-List, B-List, or Z-List. I think there’s a list above the A-List, which for the purposes of this article we will call the “teens would happily jump in a lake if you told them to” list. Right now, the biggest deals on this list are probably Justin Bieber, Miley Cyrus, Beyonce, and Taylor Swift [2]. I’d argue that this list is even a bigger deal than it was a decade ago, given that those on the list can now be tagged, tweeted at, and forever be written about by people who have deep-seated personal issues that have nothing to with their music.

For example: as a legion of people who tweet opinions, we are quick to really hate Justin Bieber. While Justin Bieber does a lot of things that are very easy to hate on, there are approximately zero people who can relate to his position — insofar as handling the fame, the scrutiny, and the disgusting amount of money that middle-aged executives continually steer him towards. Whether you would be awful to your neighbors and go drag racing if you were Justin Bieber is irrelevant. Nobody is Justin Bieber.

Meanwhile, the most notorious thing Taylor Swift has done is hook up with guys and then not hook up with them anymore.

I know I’m not the only one who’s seen this — starting in early September with Shake It Off, and more recently with Blank Space, the recent batch of Taylor Swift hits have had this inexplicable ability to get everyone at the bar on the same page. When these come on, you’ll generally see the switch flip —  girls go crazy, bros inexplicably know the words, and many a bar patron transitions from pretending to have fun to maybe actually having fun.

Of course, Taylor Swift isn’t the only artist with songs who have this ability. While out at a bar a few weeks ago, a well-placed play of Kanye’s Stronger blew Welcome To New York out of the water [3]. Nonetheless, I don’t think you’re gonna get the same reaction with the latest hit from Bruno Mars.

3. The Pop Is Addicting, But Without The Dark Illumanti Magic

From the late 90s boy band era onwards, it seems that corners within the music industry have really pushed the “lets manufacture really catchy songs and then make a shit ton of money” strategy. Hence, one of the main reasons why aging people in leather jackets have been complaining about the lack of real music for the past 20 years — just like any form of content, the things that are popular aren’t necessarily “good.” As the man, the myth, the Patrice Wilson figured out, you can be popular if you simply figure out the formula for being popular. [4] And as Bo Burnham comments on in the very funny Repeat Stuff, factions of the music industry have taken this popularity vehicle (and its propensity for massive profit), and have placed it above all else — thus, creating this weird dark subtext that bubbles barely below the surface, robotically saying “swag”:

Talking about the “quality” of Taylor Swift’s lyrics is certainly subjective, and seems like a great way to turn this into the internet equivalent of sitting in your apartment listening to your two friends argue about campaign finance reform for five hours too long. But, particularly in regards to her newest stuff, she seems to acknowledge that dark subtext head on — I guess what I’m trying to say is that even with its relatively straightforward message, a song like Shake It Off feels like it’s coming from a place of honesty and transparency rather than a place in which those narratives are manipulated for building fans and profit.

4. Blank Space Is The Best Pop Song In Years

^This is  my opinion.

Since 2010, the only other contenders are Rolling In The Deep, Tik Tok, and Call Me Maybe. I’d argue Tik Tok isn’t as seminal because everyone over 30 seemed very horrified by every single aspect of the song. Rolling In The Deep feels almost too elegant; on an instinctual level, it doesn’t elicit the “teens willingly jumping in a lake” factor. (Teens aren’t gonna send death threats en masse to people who don’t like Rolling In The Deep, and for a song to be the best in pop you need a legion of fanatical teens.) Call Me Maybe, in my opinion, is a perfectly constructed pop song. But Carly Rae is a one hit wonder [5], and both her image and the contents of the song feel more like a two night stand than a person who members of your family would still talk to on occasion if you guys ever broke up.

Blank Space is ridiculously catchy, it’s Taylor’s voice in her entirety, it’s funny, and my brother and I spent the past few days of our Thanksgiving break flipping through radio stations every time we were in the car to try and find it. We were successful pretty much every time.

Some seem to knock Taylor for pretty much completely ditching her country roots, but the evolution feels pretty natural.

Speak Now felt more pop than Fearless, Red more than Speak Now, etc. It’s clear she had the unadulterated pop potential from the get-go [6], and she just slowly moved towards another genre as her career, level of celebrity, and general outlook evolved; like a kid who goes to college wanting to be a lawyer, and slowly moves towards teaching.

Taylor Swift boasts a rather nice estate portfolio — with property in Beverly Hills, Nashville, TriBeCa, and Rhode Island. Last year, she flipped a house she had bought in Cape Cod back in 2012 (when she was dating Connor Kennedy, and everyone went crazy because people go crazy when there are implications! and narratives! ), netting nearly a $1M profit. I find this impressive.

I’m a big fan of Spotify. I had premium for awhile, and it was pretty terrific. I’d still have premium, but I decided to shovel that $120 a year into the insatiable rent furnace.

Convenience aside, it’s very clear that a world dominated by Spotify is not a great economic reality for artists. Gradual institutionally-backed acceptance has proven to be a great way of preventing people to make a living in creative industries, and it’s very nice to see someone with influence speak her mind. Granted she’s one of the handful or artists who can remove her stuff from Spotify and not put her career in jeopardy — nor is she by any means the first well-known artist to actively speak out against streaming services — NOR should we disregard the Big Machine’s album-selling strategy that’s been pervasive throughout all of this — NOR is the issue as black and white as “Spotify is bad” [8] — but the fact that she made a move, on a very basic level, is something. Momentum needs to start from somewhere.

In conclusion, this is an article that enjoys Taylor Swift. For the record, I listened to Blank Space about 7 or 8 times while writing this. I also listened to Crazier a bunch of times. Very underrated.

[2] You’re not gonna read a article about her doing meth.

[3] You can say Jennifer Lawrence deserves to be on this list, but actors arguably aren’t on the same plane as pop stars; they’re generally praised for being other people. You can also argue that Kanye and Kim Kardashian are on this list, but (a. they’re older, and therefore have a much better sense of who they are, mega-famous or otherwise (b. they definitely have more than enough internet articles about them.

[4] Imma let this footnote finish, but that last footnote is one of the best footnotes of all time.

[5] Very catchy beat, caters to teens, outrageous enough to cause a stir.

[6] As of now, it seems like C-Rae is moving towards that status.

[7] All of her albums are generally considered “Country Pop”, with the exception of 1989.

[8] This appears to be a complex issue that won’t be discussed in as lengthy a fashion as it merits. To say “Spotify is bad for artists” doesn’t seem entirely fair to the issue at hand, nor to Spotify. The industry has clearly changed.

Read this: 10 Songs For When You Need To Be Less Stressed Out