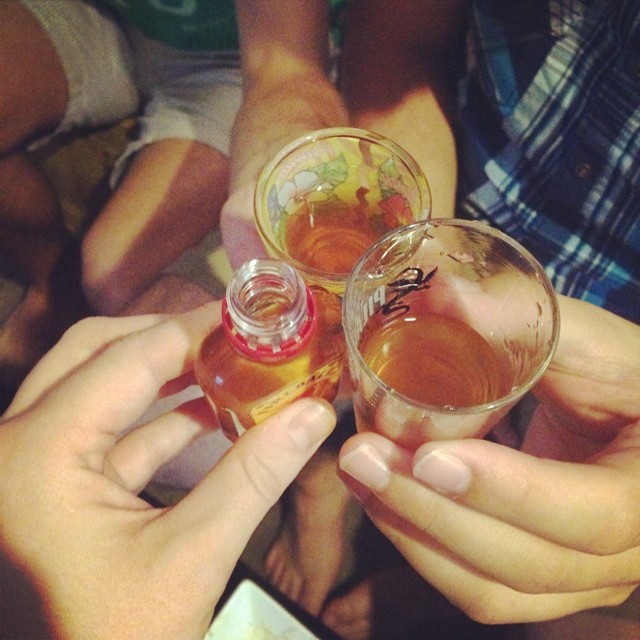 I was really poor that summer. Like so poor sometimes I wasn’t sure if I’d have enough to take the bus the hour and half it took me to get home from the retail job I was sure would be the end of me. I knew if I couldn’t cough up the 2.75, it would be a two hour walk home. And I knew that because once, it happened.

And even though everything about my job was terrible and I wasn’t sure who I was or who I wanted to be, I still somehow felt the overwhelming sense of possibility that summer.

But maybe that was the whiskey talking.

The first time a comedian came over to my house and tried to make me laugh I don’t really remember kissing him. I remember the plastic pint glasses filled with whatever we had in the freezer of that apartment above the grocery store, and I remember him stumbling back into my apartment the next morning after I was sure he was gone with a hungover greeting of, “I brought bagels.” He left things in our bathroom. A miniature thing of toothpaste, some floss, and a giant bottle of contact solution. I’m still completely in awe of how sure he was of his own permanence. Like he was just positive that he was going to last because we’d happened to make out on my couch on some night in June in between sips of Fireball.

Greg used every last bit of that contact solution for the next year. I stopped returning the comedian’s texts a week later.

So many people slept in our living room that summer. Friends would come and crash before making the hour and a half drive out of the city the next morning, people from college would come “just to see what Seattle is like!!” only to be annoyed that we were literally living off of $50 per week and could barely do anything fun. But regardless of our own bleak financial status we were always happy to inflate the air mattress, put on a movie, and drink on the living room floor. I’d scramble to the freezer, find whatever we had left from one of our “splurges” and happy pour a round of shots for whatever guest we had at the time.

We were really good at making something out of nothing.

I dated this boy for a month because he seemed like he had his shit together, and I remember laying in bed with him while he talked about things like grad school, boat races, and just staring at him and thinking, “We couldn’t possibly be more different.” There, in the glow of the Ikea lights wrapped around my headboard and the haze of whatever cocktail I’d foolishly paid for while we were out, I realized that I was lost. I had no idea what I was doing or what I wanted or where I was going or who I was. And if it was that obvious to me, it was probably that obvious to him.

He would later end things with me by telling me I wasn’t someone that he could see taking seriously. I sat on the floor of the living room with Greg and his boyfriend and did shots of whiskey to make myself feel better for a break up everyone could see coming from 7 miles away.

I was really lost that summer. So lost I convinced myself that selling sweaters could make me happy, swiping on Tinder would make me feel less empty, and lying enough would eventually make those lies a reality. I wasn’t happy, I never fell in love but did fall out of it, and one night in September I decided to stop lying to myself.

So I did a shot in the kitchen the night before my 25th birthday, poured a glass of merlot, and wrote down all the things I knew to be true, and hoped would be true, and wanted to say.

And for the first time since May, I felt the possibility of what it would be like to be found.