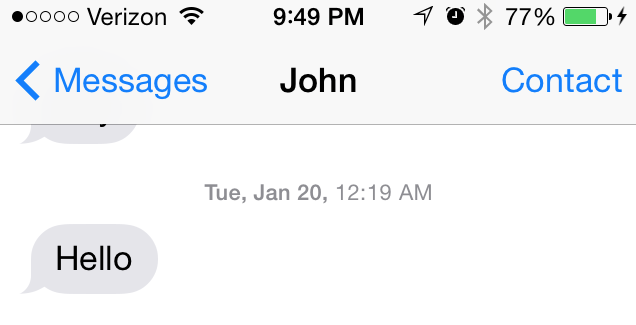 It’s 10pm. Do you know where your Ex is? Don’t worry, they’ll probably send you a drunk text in like 10 minutes.

Analysis: If a picture is worth a thousand words, an emoji is worth a thousand more and is even more fucking ambiguous to figure out the meaning of. Emojis are probably the worst thing that has ever happened to texting with your Ex because you’ll begin to find yourself psychoanalyzing for 45 minutes about why your Ex sent you an ice cream cone and an octopus that one time (who even uses the octopus emoji?? Why with the ice cream cone?? Can I look it up on Urban Dictionary or something?!). And that smiley face is the worst. This message just oozes a level of drunken confidence that will inevitably lead you to aggressively rolling your eyes, so it’s best to either immediately ignore or torture your Ex with the anxiety-inducing hell that is the typing ellipses (because you know after sending a message like that, your Ex is definitely staring at their phone waiting for your response).

Analysis: Although it’s initially difficult to distinguish why this is unlike “Hey:),” it means something astronomically different. First, the Ex is definitely more inebriated when they send this one: each “y” correlates to how many drinks the Ex has consumed up until sending the message. Secondly, and most importantly to remember in contemplating whether you’ll respond, is that this message is so much more emotionally-detached and inappropriately intentioned. Your Ex is definitely not interested in catching up on how your classes have been going. Why were you dating them again?

Analysis: This, just like the “Heyyy” text, informs you immediately of how intoxicated your Ex is, but with an added sense of coyness. It’s inevitable Ex is giggling alone in the corner of a bar somewhere, waiting for you to hit them up so they can drunkenly admit they’re still into you and then immediately pretend nothing happened when they’ve sobered up the next morning. However, there is more effort put into this than “Heyyy”– auto correct has made it functionally impossible to be able to type out “Hiii” without changing it to “Hoop” at least once, which means Ex had to have taken the effort to focus their fuzzy, drunken gaze upon their screens to manage to opt out of the auto correct suggestion. Some can’t even do this while sober, which means Ex must really love you. Or, is really desperate.

Analysis: OMG what. Including grammar in texts– especially a period at the end– adds a serious tone to the overall message. But still your heart, because Ex still sent this at 12:15am on a Friday night, which only means that Ex is caught in the drunken limbo between a merry, giggly glow of tipsiness and full-on blackout. This drunk stage is always problematic because it leads people to either burst into tears in the bathroom or confess undying love for the bartender, so it adds up that Ex would decide to feel obligated to send an untimely serious text about missing you. Awesome.

5. I know you have a test tomorrow morning, good luck!

Analysis: Grammatically correct and includes words longer than five letters, so Ex is clearly not completely inebriated. But, still, can you even remember the last time someone other than your mother wished you luck on a test the night before? This is a move that can easily be played off as just being friendly, while also initiating conversation. It sets Ex up with an excuse to follow up the following day about the results of the test too- sort of weaseling their way back into your life and making it hard to get mad at them for it. Recommended response would be to throw your phone out the window.

Analysis: No subtly, no friendly pleasantries, no coyness, nothing. True, Ex doesn’t come right out and say it, but realistically the odds of Ex following up this message with something like “oh, good, could you print something out for me?” or “I just finished this really great book I want you to download onto your Kindle literally right now” are nonexistent. Bold move on the Ex’s part, but at the same time, a move that definitely shouldn’t work on you.

7. Do you want to get lunch or coffee some time?

Analysis: What kind of witchcraft is this? “Lunch or coffee”? Is this a job interview? Should you wear a pantsuit? You two haven’t spoken in weeks and you’re finally getting over them and then this? Why is something so simple so ambiguous?! Are you guys doing “friend things” now or is this something more? This is easily one of the worst texts to receive because it’s such a fucking riddle. Play it suave, don’t get your hopes up with any wild hypothetical assumptions about what could come out of this. For all you know, it’s literally just lunch or coffee.