The immediate weeks following a breakup are traumatizing.

Side effects include, but are not limited to, uncontrollable sobbing at the drop of a hat, non-phantom limb syndrome (you’re seriously not missing an arm, you just miss them that much), nausea at the sight of anything, aches and pain in places you didn’t even know existed, dry mouth, raw eyes from all of the said crying, lack of motivation, loss of optimism, weight gain or loss, deep, passionate anger, and of course – dry heaving. My fave.

But honestly, this phase isn’t even the hardest. For anyone going through a breakup right now, I do not mean to be a pessimist, but it’s going to get a lot of worse before it gets better.

The most frustrating and confusing part of a breakup is when you are actually ready to move on.

You’ve become so self-aware of how miserable you are that you actually start beating yourself up for being pathetic. Ughhhh! Why aren’t you moving on by now? What’s it been – eight, twelve, sixteen weeks? Good grief you figured you’d be onto your first rebound by now. But instead you are dramatically looking out the window, wondering what they could be doing at this very moment and rolling your eyes at the cliche you’ve become.

It’s the most grueling phase of this breakup, but it can be fast-tracked (and you will hate me for it.)

If you are serious about moving forward, then you are going to have to know what to purge after a breakup. I am going to ask you to cull anything and everything that reminds you of your ex. It’s crucial to understand that in most cases, your heart does not remain broken because you lost your soulmate, it remains broken because you continually are reminded of how happy you were. But you can be happy again.

So if you’re ready to get over them, here is what to purge after a breakup:

I seriously wish there were breakup services that would demolish the Starbucks you two frequented down the street. I really, really do. But since we can’t hire a bulldozer to destroy restaurants and coffee shops, you are going to have to do your best to pretend they don’t exist.

If you take a certain route every day and you pass by a brick and mortar symbol for your relationship – take a different road. I don’t want you going anywhere NEAR your date night spots, study places, work spaces, or living quarters. None of it. Erase it from your presence. This might take a lot of extra planning and dodging, but it’s worth it. You might not realize how triggering these physical representations of the establishments can be. Taking a casual stroll by y’alls favorite wine bar might seem innocent – but subconsciously, or even consciously, you are remember the times you two shared together. Memories play back like a movie, and all of a sudden, time is rewound. You are happy and together and none of this gloom ever happened. You start to pine for those days, and confuse yourself by thinking it’s THEM you miss – not the feeling. It’s so easy to get wrapped up in idolizing the relationship once it’s ended. But in reality, the relationship had problems. It was not meant to last – otherwise it would have.

Don’t let yourself go there. Skip the landmarks and save yourself the heartache.

In my experience, this is the hardest step. By a mile. And I’m already assuming you and your ex aren’t speaking.

Because those relationships keep you and your ex tied together.

Secretly you are hoping these friends will serve as a link between the two of you. You don’t want to be erased from their life – you want them to hurt as much as you hurt. Not in like, a terrible way, but in a pining way. In a “let’s get back together I can’t believe we made such a big mistake” kind of way. You want to be omnipresent in their life. And who better than their friends and family to deliver those reminders?

The problem is, these people will always have your ex’s best interest at heart. They were in their life first – not yours. And while there might be a few exceptions, it rarely plays out that the recently broken up girlfriend gets to keep the solid relationship with the friend group (and definitely not the family).

You keeping in contact with these people does not help you out. The more you force a relationship, the more you anchor yourself to a dead relationship.

There is another thing that might be motivating you to keep these friendships, and that’s PR. Breakups can be messy, and you can’t always control what messages are being passed around about the reason behind the split.

I know in my case I had to deal with some pretty crappy gossip for years after my breakup. And guess what? I HAD remained friends with all of the loose connectors and I still got my ass beat! Get this: My current fiancé, five years post breakup, was actually WARNED about my “clingy” abilities (!!!). Afterwards he even admitted that he was hoping it was somewhat true because he likes attention lolololol. I hated to let him down!

Clearly I am empathetic to holding onto these relationships, because I did it myself. But take it from someone who let her ego motivate her: let it go. Controlling the message is not worth staying hooked on your ex for an extended period. Plus, like in my case, it probably won’t even work. People are going to say what they want to say even if you are a sweet pea. But if you let it go, you will let your ex go simultaneously, and then you won’t care about EITHER. Wouldn’t that be lovely!? Win-win!

This one seems obvious, but I have to address it just in case.

Please discard of emotionally charged items involving the breakup. You probably weren’t a pack rat before, and if you were, now is the time to break that silly habit. Purge! Shed any knick knacks, movie tickets, comfy sweaters, or anything else that remind you of them.

You might cringe at the thought, but ask yourself, “Is holding onto this item helping me move forward?”

Some of you might tell a white lie that typically goes like this, “I feel worse when I don’t have this comforting knick knack around.” It’s the same logic we use to justify keeping in contact with an ex. OF COURSE we feel better when we are connected to them! We didn’t want this relationship to end! So yeah, an ex’s presence makes us feel IMMENSELY better.

For about an hour.

You are putting a bandaid on an axe wound. Don’t give yourself a hit of comfort when you know in the long run it’s just going to lengthen the recovery period. Do what’s challenging NOW so you can rest easy later. Just purge.

Were you guys watching the same TV show together? Have a favorite movie? Reading the same book? Follow the same blogger?

I know this seems wildly unfair. I know you don’t want to lose your identity during this breakup. And I really know you will miss Big Little Lies. But it’s not Reese Witherspoon you are tuning in for every Sunday night – it’s for someone else.

Your relationship had certain common activities that bound it together. Most couples after a certain length of time get into a rhythm. On Saturdays, they hike. On Mondays, they cook. On Wednesdays, they happy hour. On Fridays, they date night. And on Sundays, they watch TV. You can’t let yourself fall into the same rhythm post-breakup. It’s only going to remind you that your buddy is missing 🙁

You don’t have to quit everything, but be mindful of the habits that defined you two as a couple. Stop attending yoga every Tuesday if that was y’alls thing, and instead trade it in for spin class. You don’t have to be doomed to a life of boredom, but you can add new activities and flavor into your life to distract yourself from the absence of someone else. Forcing those “couple” activities onto your single self *might* feel good in the moment because of their entrenched memories, but they have the tendency to keep you all Eeyore-like. Shake it up. Be a Tigger. Try something new. And, when you’re ready, you can always come back to Reese.

It’s very brave of you, and I will give you a virtual high five right now because I really admire you trying to be the bigger person. I am also giving you permission to be the smaller person.

Smaller people get over their exes. It’s just how goes.

Here’s how to purge on social media: UNFOLLOW.

If you are really, really not over them, you should probably unfollow those friends we talked about earlier, too. This isn’t for punishment or to make a statement, it’s to get your mind in the habit of not being flooded with relationship memories anymore. Seeing a picture of their mom, their best friend, their best friend’s girlfriend, or anyone else is going to be just as triggering as actually seeing them. If you think you can handle it, be my guest. If not, just get it over with and unfollow.

If you are really, really, REALLY not over them AND have stalkerish tendencies (it’s ok, we all do), you might need to block.

I don’t say this to be dramatic, but it’s the only way that you can stop yourself from snooping through their Facebook or Insta photos. You do not need to check up on them. You do not need to torture yourself with how happy your ex is (exes ALWAYS look happy on social media because EVERYBODY looks happy on social media!). You do not need to freak out over a pic they posted with another girl who may or may not be someone he hooked up with that night but is actually his second cousin he bumped into at a wedding (You know, the one he invited you to but took it back post breakup. Ouch). Don’t do that to yourself. If you cannot be trusted to keep your profile to yourself, then you need to create safeguards for yourself immediately. This isn’t childish, it’s necessary.

Once you have moved on from the relationship and are feeling more confident about your direction in life, you are more than welcome to reintroduce purged items back into your rhythm. I can’t promise you will want to, but it’s definitely allowed.

This purge does not have to be permanent. It just needs to be implemented long enough to give you the space you deserve to heal. 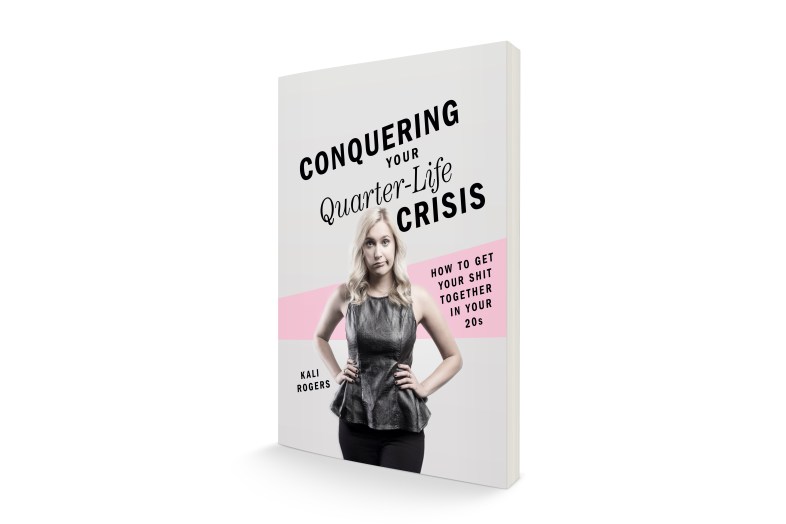 Kali is the CEO, Founder, and Janitor of Blush—an online life-coaching company for girls. She’s also a blogger and a professional life coach at Blush Online Life Coaching.

Keep up with Kali on Instagram, Amazon and joinblush.com