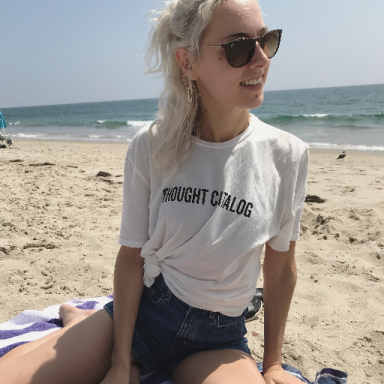 1. He tries to convince you of something you know isn’t true.

He said he called you, but you can’t seem to find the missed call when scrolling through your phone. His words don’t match his actions. He brushes you off whenever you think you caught him in the act. Don’t let his words be louder than your intuition. Most of the time, you’re probably right and he’s just trying to manipulate you into thinking otherwise.

2. He uses your actions as an excuse to act out himself.

Well you did this, so I can do that.Whether you messed up yourself or not, you shouldn’t be with someone who wants to intentionally hurt you back. You shouldn’t want to be with someone who makes you feel badly about the mistakes you have made and already apologized for. He’s trying to put all the blame of your toxic relationship on you, instead of taking some of the fault. Relationships shouldn’t be an eye for an eye and the right partner won’t make you feel worse about messing up.

3. He tells you how much he likes you, but doesn’t fully commit.

This one is pretty obvious. There’s always going to be an excuse for him not to commit to you, but maybe one day he will. This is what causes you to latch on in hopes that the one day will come. He wants you to stay hooked, in order to feel needed by you. This in itself will drive you crazy, because you’ll keep hoping for something that never comes. You’ll keep envisioning that moment in your head and when it keeps being pushed back in reality, you’ll feel crazy. You’ll feel like you’re pressuring him, because he’s already used every excuse in the book. You shouldn’t have to convince someone to be with you. They should commit willingly and full-heartedly.

4. He doesn’t respond to your texts, but is active on social media.

It’s not that hard for someone to respond saying that they are busy. When a guy is active on his phone and is not responding to you, it means he’s actively ignoring you. This is what messes with your head, because suddenly you’ll start to come up with all these different reasons as to why he’s not keeping in touch. Truth is, he doesn’t want to or else he would. He’s taking advantage of the fact that you’ll still try to contact him, even if he doesn’t put in the effort.

5. He makes snide comments about the things you’re most vulnerable about.

People you become close to will find out your vulnerabilities. The ones that respect and truly love you will never poke at them for fun. If he makes you feel small through use of the things you opened up to him about, he’s trying to make it so he seems better. He wants you to feel small in order for you to work harder at trying to convince him you’re not. You’ll feel as if you need his validation in order to make those comments stop, but they won’t. He’s just toxic and you are plenty worthy. The right people won’t need you to work in order to prove that.

6. He won’t discuss problems within the relationship.

Nothing is wrong. It’s not a big deal. Don’t worry about it. Instead of actually asking about how you feel and asking to further explain your worries, he will cut you short. He will make you feel as if you’re overwhelming him for no reason, when in fact there is a good reason for you to be upset. This is what causes all the issues to build up in your own mind, making you feel crazy. You’re not crazy, he’s just unable to handle a mature, open relationship.

7. He only hangs out with you or talks to you on his own time.

You are his, but he is not yours. You should always be there for him, but when you need him—he is nowhere to be found. You can’t help but want to answer every call and text he sends, even if it’s sparingly, because you’ve been wanting to talk and he’s giving you the opportunity to. But, this in itself is giving him control.

8. He makes grand promises, but he doesn’t follow through with them.

He wants to take you here and there, he wants you to meet his family and friends, he wants you to be part of his life that no one else has seen. It’s all great when the words are spoken to you during intimate moments, but then he leaves and those promises are taken with him. It’s as if he never said them and you feel as if it was all in your head, only for him to come back around to make more empty promises.

9. He doesn’t focus his attention on you when you’re together.

He’s on his phone or wanting to work on something else. He feels distant when you’re sitting right in front of him. We all know relationships take two people and effort. If he can’t manage to even focus on you when you’re right in front of him, he’s not emotionally equipped enough to have a healthy, stable relationship with you. You’re only going to feel alone, despite having a body right next to you. It’s not okay for someone to make you feel this way.

If you try to end things with him and he attempts to hold on, despite all the signs that he’s not ready to commit or be with you, he is toxic. He is trying to keep you as a backup plan and you may feel needed by him in that moment, but it will always go back to how it was. He will fight until he knows he has you once again. You will feel happy for his efforts, only to become disappointed when he doesn’t feel the need to fight anymore. Let him go and don’t let him convince you to come back.

Writing my way through life, one word at a time.