Last week, there was a tropical storm headed for New Orleans that had all of us Katrina veterans worried this might be the next big one. SPOILER ALERT: It wasn’t. At least not for most people. For me, it was pretty fucked up.

My mom was taking care of my 7 year-old nephew, Jaedon, that whole week while my brother was out of town. When she heard about the encroaching storm, she called and asked if I would stay over the following night which was when it was predicted to make landfall so I could help out in case things got really bad.

I spent most of that next evening waging a successful nerf campaign against my nephew which left Jaedon fairly exhausted and my mom didn’t have much trouble putting him to bed when we were done. She then shouted a goodnight down to me from the top of the stairs and retired to her own room.

I had planned on staying up and writing through the night so someone was conscious if-and-when the shit started to hit. And about an hour later as I was sitting out on the back porch listening to all of that rain and the wind howling through the narrow alley behind my mother’s house, I started to feel justified in my concern. Unfortunately, it wasn’t the weather that I needed to be worried about.

I gave the slanted wall of rain just beyond the porch’s roof one last worried glance and then reentered the house, pulling the back door closed behind me and shutting out the din of the storm to hear the unevenly paced footsteps of someone trudging down the stairs leading into the foyer. I crossed the den and turned as I entered the foyer to see my mom descending the stairs with her eyes closed.

I let out a relieved sigh, silently scolding myself for not recognizing the telltale sign of her zombie-like footsteps. My mother had been prone to sleepwalking for as long as I could remember and I learned early on that the best thing to do was simply stay close and wait for her to wake herself up.

She had a tight grip on the handrail and was taking long pauses between each step, but eventually my unconscious mother made it all the way to the bottom of the stairs. I followed her across the foyer, my mom now moving at a slightly more confident pace as she approached the front door. She stood there at the closed door for a moment, seeming to hesitate.

And then she spoke…

“Who is it?” my mother asked in the distant, muddled tone of a sleepwalker. She paused to listen and the response she must have heard in her dream seemed to confuse her. I was standing directly next to my mom at this point and watched as she suddenly furrowed her brow. Her eyelids flickered a few times, making me think that she might be coming out of it, but then she continued…

“What does THAT mean?” My mom replied with an incredulous tone. She paused once more to listen and this time, the answer she received left her frowning. When she spoke again, there was a mounting concern in her voice…

“Do I have to?” she asked the closed door and after another moment of hesitation, my mother reached out and unlocked the bolt. Her hand was around the knob and was just starting to turn it when every instinct I had told me I needed to stop her.

I slapped my left hand against the door, holding it closed as I reached out with my right and relocked the bolt. The sound of it sliding into place caused my mother’s eyelids to flicker once more and then they shot open as she suddenly awoke. My newly conscious mom inched her wide-eyed gaze up to the ornate window above the front door, prompting me to do the same.

“That’s too tall,” she said as I spotted the rain-soaked hat filling the lower half of the window. A window which was set at least eight feet up the wall. I felt a hand squeezing my arm and tore my attention away from the window just in time to catch my mother as her eyes rolled up into her head and she started to faint.

I lowered my once more unconscious mom to the foyer floor as I reverted my attention to the window and the hat that appeared to be perched atop the head of the inhumanly tall figure standing outside. What sounded like a very large fist began to knock on the door with a quick, deliberate rhythm.

The pounding seemed to echo my rapidly beating heart as it began to hammer against the inside of my chest. I slowly stood, careful not to make a sound as I kept my eyes fixed on the window above the door. After several moments that felt like decades, the figure stood on its tiptoes so it could look in through the ornate window.

I glimpsed its eyes, which were two glowing blue embers half buried in darkness, but the wide brim of the figure’s hat shrouded the rest of its face in an unnaturally dark shadow. I pressed myself against the front door and crouched down, silently praying that I had gotten out of sight before the figure was able to spot me. I held my breath and began to count off the seconds as they passed…

I could hear the figure’s movements through the door as it slowly turned and started away. I let out a relieved sigh but the feeling didn’t last as I heard the thing’s heavy footsteps heading around to the back of the house.

I recalled how my mom’s sleepwalking had distracted me when I entered from the back porch a minute ago, causing me to forget to lock the back door. I stood and was halfway across the den before my mad dash to the back was nearly cut short by a rogue ottoman. I almost pulled a full-on Dick Van Dyke but managed to regain my footing at the last second.

I made it to the back door in what I assumed was a photo finish. I quickly turned the bolt, expecting to hear the figure’s lumbering footsteps approaching any moment now but after a full minute of standing there pressed against the door and listening to my own panicked breathing, I finally realized that wasn’t going to happen.

After a brief internal debate, I unlocked the door and opened it a crack to peer out at the vacant back porch. Through the roar of the swelling storm, I could just barely make out the scraping sound coming from the roof of the porch, which was positioned directly below the guest bedroom window. Which was where Jaedon was sleeping.

As I sprinted back into the foyer and rounded the foot of the stairs, my still-unconscious mom began to mutter in a vaguely panicked voice, “Hurry… it’s up there with my grandbaby.”

“I know! I’m going!” I shouted back in a tone that I hadn’t intended to sound quite so annoyed as I bounded up the stairs. Jaedon was already awake and talking to someone as I reached the landing to the second floor.

“Can you show me?” I heard him ask and my adrenaline must have gone through the roof at that point because I can only remember the next few moments as a series of blurred snapshots…

I reached the door to the guest bedroom and tore it open to see Jaedon standing at the window overlooking the back porch’s roof. The window was open and the figure’s blue ember-eyes were peering in from just outside. And jutting out from about where I assumed the figure’s mouth would be was a large, dripping appendage that resembled an insectile proboscis.

Something at the end of this proboscis was emitting a bright strobe-light effect that seemed to be lulling Jaedon into a hypnotic trance. And then something REALLY weird happened as I started across the bedroom.

After the initial flash from the strobe-light washed out my vision, the resulting darkness brought with it an image of something almost too abstract to be decipherable at first glance. But then there was another flash and I started to understand what I was seeing. I was being told a story in pictures…

A story about something both ancient and horrible crashing down from the cosmos and burying itself at the bottom of a primordial ocean. This ancient horrible something was on the run from some other something that was apparently even more horrible. So the first something used its powers to relocate the newly formed world it was hiding on to a more ideal distance from the nearest star, allowing the planet which would one day be known as Earth to eventually produce life and thus feed its eternal craving for the universe’s one and only true constant: Blood…

During the next strobe flash, I saw that I was finally within reach of Jaedon and pulled him out of range of the figure’s proboscis just as it was about to make contact with my nephew’s neck and then I hurried to the window and slammed it shut on the retracting appendage.

The figure emitted an ear-splitting screech and used its massive hands to yank the proboscis loose before skittering off into the night, its defeated sobbing all but lost against the howling wind. The tropical storm began to veer away from us not too long after that and by the next morning, the sun was out and the sky was a vast and empty blue that seemed almost condescending compared to the weather we had been experiencing mere hours earlier.

I talked with Jaedon later that day to find out what he remembered about the previous night. Thankfully, the answer to that question was: Not much. He did claim that he had been the ultimate victor of our nerf war, but I wrote that off as exhaustion. For the record though, he did not win. I won. By a lot. This was my personal load-out and to everyone currently judging me, I’ve had that Ghostbusters gun since I was a kid… 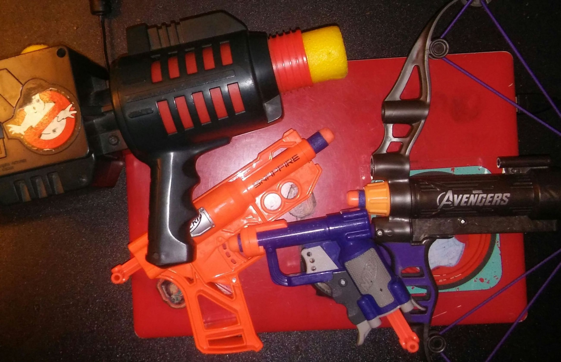 I did some research and learned about the town of Pawleys Island located on the coast of South Carolina, which is another stretch of the continental US that has to regularly worry about hurricanes. This particular town was the source of an urban legend known as “The Gray Man”, who is described as a tall man in a large brimmed hat who likes to go around, knocking on people’s doors during severe thunderstorms.

Though, the Pawleys Island Gray Man is considered to be a generally benevolent being, my theory is that there are actually many Gray Men out there… maybe as many as there are violent storms each year… and Pawleys Island is merely the exception that proves the rule. Either way, I recommend that you don’t fuck with otherworldly entities as a whole.

Not to sound like a bigot, but they literally don’t belong here.

The Woman Who Looked Under Her Bed And Saw A Man Crouched, Facing The Other Way