“What is the scariest part of your job?”

As a horror writer, I’ve gotten quite a bit of use out of the above question. Whenever I’m forced to meet new people and conduct with them what Spanish Inquisition-era Catholics first dubbed “small talk”, the question these people like to lead with is typically some variation of…

And if you’re curious, my usual answer here is the same as my Twitter bio…

“I write Goosebumps for grown-ups.”

Cue the obligatory awkward pause in which they scan the room for nearby exits while I pretend not to notice by asking about their main source of income and what about it, if anything, scares them. And you might be surprised at just how intense their responses can get.

That’s why I make it a point to ask everyone that question, regardless of their occupation and ESPECIALLY when it’s a job you wouldn’t normally think of as having the potential for genuinely creepy moments. Like, for example: Orthodontist… Good god, was that one fucked up.

But there is also still a lot of malpractice stuff pending there and I’m afraid simply changing the names wouldn’t really cut it with this case. So, unless you fine folks are willing to pony up for the attorney’s fees, I’m afraid that one will have to wait. For now though, here are three terrifying first-hand accounts from people with mundane jobs that I CAN legally tell you about…

Pretty much every major American city with access to the interstate highway system has its own Traffic Management Center, which functions as a central hub for the various day-to-day operations that come with maintaining a vital artery of nation-wide transportation. Mark’s job at the New Orleans TMC was, in his own words, “to sit on my ass and watch traffic.”

There was a lot more to it than that, of course, but the summation wasn’t exactly inaccurate either. Like a ninja assassin or the lyricist for a boy band, if Mark was doing his job correctly, it would look like he wasn’t doing much off anything at all.

In my opinion, though, the absolute best part was his office. When Mark first snuck me into the TMC to show me where he worked, my initial thought was I had just walked into the situation-room from 24.

Each monitor was divided into four quadrants so that the wall was currently displaying sixteen different real-time feeds of the local interstate, all of them streaming live from the network of cameras stationed throughout the department’s jurisdiction.

After a quick scan of the room, I felt compelled to once more ask Mark if he was sure Kiefer Sutherland wasn’t going to hunt me down and electrocute my testicles just for being in here. Mark was leaning over the nearest workstation’s computer and clicking around with the mouse as he assured me for the second time that no one would care. He then nodded at the video-wall.

With a final click of his mouse, one of the sixteen real-time feeds displayed in front of me expanded in a blink so that it now filled the entire wall. The shot was from a westward facing camera positioned above the Canal Blvd overpass. The picture quality was about as good as could be expected of a live feed from a streaming traffic-cam. But why bother describing it when you can simply see the feed (which, like all of the TMC cameras, was available for public viewing online) for yourself?

Riveting stuff, huh? For those of you unable to view the link for whatever reason, here is a screencap from the camera’s point of view that I took the other night…

Mark used the mouse cursor to direct my attention to the space beneath the Westbound part of the overpass, designated below by the red arrow… 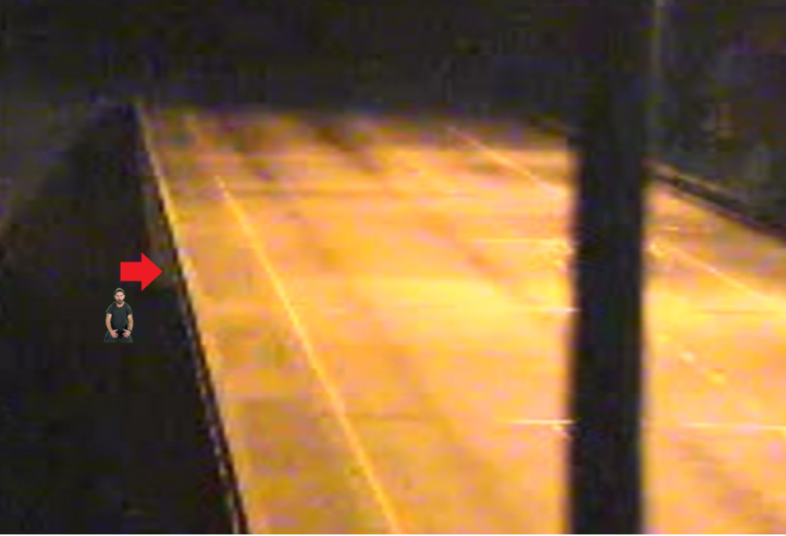 I squinted at the screen and nodded. When Mark didn’t respond, I turned and found him studying me, looking as if was still unsure whether he wanted to talk about this next part. Finally, Mark emitted a sigh and said…

“That’s where it lives.”

The woman had been headed East on the 610. It was late and her VW Jetta was the only vehicle in sight when its front left tire blew out, forcing the car to swerve sharply and collide head-on with the left-hand guardrail. Worse yet, the woman wasn’t wearing her seatbelt and the impact of the sudden collision had flung her through the front windshield.

Mark just so happened to be viewing the feed from the Canal overpass when all of this occurred and he was reflexively reaching for the walkie-talkie beside his deskphone even before the dying woman’s crumpled body had landed in the small expanse of grass positioned between the overpass.

In quick succession, Mark radioed emergency dispatch and then the nearest MAP truck (service vehicles that the TMC employed to patrol the interstate) to inform them of the situation. The MAP driver responded, saying he was about a mile away just as Mark noticed “something” climbing out from beneath the Eastbound side of the overpass.

This something, which looked to be roughly the size of a small gorilla, began to slink across the darkness consuming most of the grass partition. The woman had landed in the illuminated portion of the median, closer to the shoulder of the road and though it was clear that this thing was making a Beeline toward her unconscious body, Mark was having trouble making out its actual shape.

Of course, the camera’s terrible resolution didn’t help. Though, Mark did mention that its movements sort of reminded him of a video he had once seen of a Mimic Octopus using its tentacles like legs to walk along the seabed.

Much like the night he told me this story, Mark was the only one scheduled to work that evening, meaning he was the only one to witness what happened next. This strange dark shape stopped just short of the light and reached out with a blurry appendage that Mark hesitated to call a hand as it grasped onto the woman’s arm and began to drag her limp body back toward the Westbound side of the overpass.

As Mark spotted the MAP truck’s yellow lights flashing in the distance, he finally snapped out of his shock-induced stupor long enough to radio the driver and shout, “Hurry! Something’s dragging her away!”

The reply he received had been a curious sounding, “Come back with that?”

But by this point, there was no real need. The strange shape had spotted the nearing lights as well and released the woman before it could drag her more than a few feet. The thing quickly scurried back toward the edge of the camera’s frame, disappearing beneath the overpass from which it had first emerged just as the MAP truck pulled to a stop behind the woman’s totalled Jetta, followed shortly by the wailing ambulance hurtling toward them.

After that, Mark started paying extra close attention to the Canal overpass feed, especially during graveyard shifts like the one he had been working that night. He claimed to still occasionally glimpse the strange shape that dwells beneath the overpass. After the first few times, Mark got the bright idea to call the city’s Animal Control division and report a nest of possums living under it.

The cheery female voice that answered seemed eager enough to help at first. Then Mark told her which overpass it was under and she hung up on him. Thinking it had been by accident, he hit redial only to have a more irritated male voice answer this time. When Mark told him who he was and what department he was with, the guy asked to speak to his boss.

A confused Mark forwarded the man to his supervisor at the time, a typically genial guy named Tim. Though, when he called Mark into his office a few minutes later, Tim wasn’t very friendly about it and he sounded more than a little shaken up. Without asking Mark for his side of the story or even bothering to explain why the people in Animal Control were being so weird about doing their job, Tim told him that the stress of his own job coupled with seeing that woman almost die was obviously getting to him and that Mark needed to take the rest of the week off to think about if he still wanted to work here and what it would require if he did.

After his forced hiatus, Mark made it a habit never to linger too long on the camera for the Canal Blvd overpass. Especially at night. And whenever he did happen to glance up during its rotation on his computer screen to spot an approaching drifter fleeing the highway with plans of using the overpass as cover from a rainy night, Mark simply disabled the feed.

So, if you clicked on that link earlier but couldn’t view it because the camera was down, just be grateful. There are things in this world that you’re better off not seeing but the really scary part isn’t what happens to those who do. It’s that, even though we know we shouldn’t, there’s a part in all of us that still wants to.