Skip to content
Report This Article
What is the issue?
“[…]Which was when the officials responsible for the custody of parentless children decided something was gravely wrong with him and sent him away, making sure he had no more clippings and all the ink, all that remained of his father, was washed from my hands.” — Mark Z. Danielewski, House of Leaves

About a week after my grandfather’s 52nd birthday, he decided (seemingly out of nowhere) to close the shrimping business he had spent almost two decades building and proceeded to take a job as a deputy for the Louisiana Department of Wildlife and Fisheries. My grandfather (whose name was Jim, though he was known as “Pops” to his 25 grandchildren and their assorted peers) loved being out on the water and this deputy gig… which mostly involved navigating a patrol-boat up and down a designated stretch of Louisiana coastline… had seemed like the ideal way for Pops to kick-off his retirement.

There was one story from his time with the L.D.W.F. that Jim loved to tell more than any other. It was 1980-something by this point and a schedule-2 hurricane was expected to make landfall in less than 12 hours. The preceding rain had already begun to fall in sheets and the Gulf was churning with anticipation by the time Jim received word to finish his current sweep and then head back to HQ.

On his way in, my grandfather spotted a small civilian fishing boat anchored about 30 feet from shore. Jim reflexively began to steer towards the swaying vessel even before he could see what the men on board were doing. There were three of them standing in the boat and the roar of the pouring rain had managed to drown out their gunfire until Jim was practically within spitting distance of their boat.

He was close enough now that he could see the hunting rifle that each man was holding. The men were aiming at a narrow, rocky peninsula of land that jutted out from the shoreline. Though now Jim could see that, due to the rain and the rapidly rising waterline, the narrow peninsula had been reduced to a tiny island.

Confused, my grandfather squinted at the makeshift island and spotted several dozen deer trapped by the rising waterline and the terrified deer had been forced to stand there out in the open while these men picked them off one-by-one; which was technically “poaching” and all sorts of illegal.

My grandfather un-holstered his sidearm and waited until the men stopped to reload their rifles and then Jim fired three rounds into the air in rapid succession. The three men quickly whirled around to find Jim standing in his patrol boat, service pistol aimed at the sky and the billfold containing his deputy’s badge hanging over the front of his other hand…

My grandfather shouted through the rain, “There’s a hurricane fixing to hit us! I wouldn’t recommend being out here when it does!”

Fast-forward 30-or-so years to last month when I learned that my grandfather was dying. It was his heart. He had a valve that needed replacing. Unfortunately, his age put Jim at too high a risk for surgery and his current doctor flat-out refused to do the operation.

And, just like that, the greatest man I’d ever known was relegated to hospice status. Of course, the Farrellys have never been the type to let something as trivial as the opinion of a medical professional stand in their way. So when we heard the initial prognosis, of course our response had been a collective, “Fuck that!”

My Uncle Jimmy poured his efforts into finding a Cardiac surgeon who would even consider performing the operation while my Aunt Jenneane and my cousin Jude (my family has kind of a thing about J-names) tracked down and hired a nurse who specialized in hospice care so my grandfather wouldn’t have to spend his final days in some cold clinical elderly home. Me and the other grandkids had agreed to take turns spending the night with Pops and I volunteered to take the first watch.

The day he came home from the hospital, my first task had been to mount a wireless webcam to the wall of Pops’ bedroom. The webcam was rather high-end and came equipped with night vision, a two-way mic, and the ability to capture live-streaming video which fed directly to an app on my phone. Though, my grandfather didn’t look too thrilled when I finally finished mounting the camera and announced that he was “officially live.”

I held up my iPad so that Pops could see the live stream of himself lying in bed, currently propped up by what appeared to be no less than 18 pillows and looking like a man who knew he was nearing the end. My grandfather squinted at his own withered image on the screen in my hands as he said, “This isn’t on that YouTube, is it?”

Exploiting my dying grandfather for channel views wasn’t really my style, but Pops’s presumption had more to do with his lack of tech savvy than anything. I explained that the only people who would have access to the camera feed were his immediate family. That meant his wife, four daughters, and one son as well as the 20-plus adult-aged grandchildren he had inadvertently helped sire (I swear Irish Catholics crap out babies like they’re trying to land an endorsement deal).

I nodded down at the iPad and jabbed a thumb back toward Pops’s bedroom door as I said, “It’s basically so I can keep an eye on you from the living room. It was Aunt Jenneane’s idea. Why? Is it creeping you out?”

My grandfather slowly dragged his eyes over to the webcam and tried to smile as he replied, “Kind of… But it’s okay. I understand.”

“You sure? It would take me two seconds to pull it down…”

“No, really. It’s fine. If I have to listen to your aunt complain about her peace of mind one more time…”

“You could always play the whole ‘I’m the one who’s dying’ card.”

Pops grinned and let out a faint chuckle that devolved into a momentary bout of coughing. After clearing his throat, he finally said, “You’ve got a lot to learn about women if you think making them cry is ever going to be the solution to your problem.”

I tried to ignore the weakening tone of his voice as I grinned at my grandfather and said, “Fair enough.”

Pops fell asleep not long after and I adjourned to the living room where I spent the next hour or so trying to find a comfortable position in front of my grandparents’ ancient rear-projection big-screen TV.

At about 9:00PM I was pulled from a half-conscious daze by the sound of my cellphone ringing. It was my Aunt Jenneane and she sounded pissed as she nearly screamed into the phone, “JOEL? Who’s in the room with Pops?”

“No one at the moment,” I said, hoping she could detect my placating tone as I continued, “But don’t worry. I’ve got the webcam open on…”

“No. Joel! I’m telling you, there is someone in the bedroom with him. I’m looking right at him.” 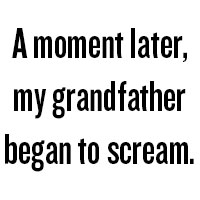 “WHERE?” I said, glancing down at the iPad in my lap. With the lights off, the webcam had defaulted to a black-and-white night vision mode and I could see my grandfather lying motionless in his bed. His mouth was hanging open and his chest was rising and falling at a slow, rhythmic pace.

A gangly, almost unnaturally thin silhouette stood in the corner behind him. I had just enough time to register that it was there before the figure suddenly transformed into a blur of motion as it darted towards the camera. The figure completely obstructed the webcam’s view as it bent down and its eyes shimmered like a cat’s as it glared at me through the camera. A moment later, my grandfather began to scream.

I charged into his bedroom to find Pops sitting upright in bed, his eyes wide and a hand clutching his chest. I had never seen my grandfather look terrified before and it was far from a comforting sight. I hurried to his side and placed a hand on his back, which was damp with sweat. I said, “Pops, you okay?”

I could hear my cell ringing in the den and figured it was probably my flabbergasted aunt hoping for some kind of explanation as to what she had just witnessed through the webcam. My grandfather let out a quiet sigh but didn’t say anything.

He put a hand on my arm and finally turned to look up at me, forcing a smile as he said, “Do you remember that story about when I was a Wildlife and Fisheries deputy? The one with the hurricane and the poachers?”

“Yeah. Of course,” I replied with a nod and a vaguely confused tone.

Pops let out a weary scoff and said, “All the times I’ve told it, I’m not surprised. But the story you know…”

He winced as he started to lean back against the headboard and I quickly repositioned his pillows so that Pops would have something to lean against. Once he was in a comfortable position, he gestured at the webcam and continued.

“Switch off that camera and I’ll tell you the rest.”

When Joel isn’t writing creepy-ass short stories, he can be found scripting and acting in subversive comedy sketches on YouTube. You can follow Joel on Twitter or support him on Patreon, if you’re into that.

I Always Knew There Was Something Off About My Stepfather, But Nothing Could’ve Prepared Me For His Gruesome Secret

50 Hilarious ‘How Did That Get Up My Butt?’ Stories From The Emergency Room