Skip to content
By Jerome London Updated November 5, 2020
Google Maps
Built in 1858 and finally closed down in 1994, West Virginia’s Trans-Allegheny Lunatic Asylum was originally founded with the intent to provide a “moral” and “humane” safe space for mental patients. However, over the years, this massive stone edifice became overcrowded, and there were endless reports of patients being whipped, tortured, shackled to walls, immersed in ice water, given electroshock therapy, and lobotomized with icepicks. Now it seems as if every miserable soul confined within these walls still haunts the place.
By Jerome London Updated November 5, 2020
Google Maps

All about the The Trans-Allegheny lunatic asylum

The building itself, perched on a river across from downtown Weston, WV, was originally called the Trans-Allegheny Lunatic Asylum. After West Virginia seceded from Virginia in the midst of the Civil War, it was renamed the West Virginia Hospital for the Insane. In the early 1900s it changed its name to Weston State Hospital. After finally reopening as a tourist spot that hosted ghost tours, it readopted its original name, the Trans-Allegheny Lunatic Asylum. 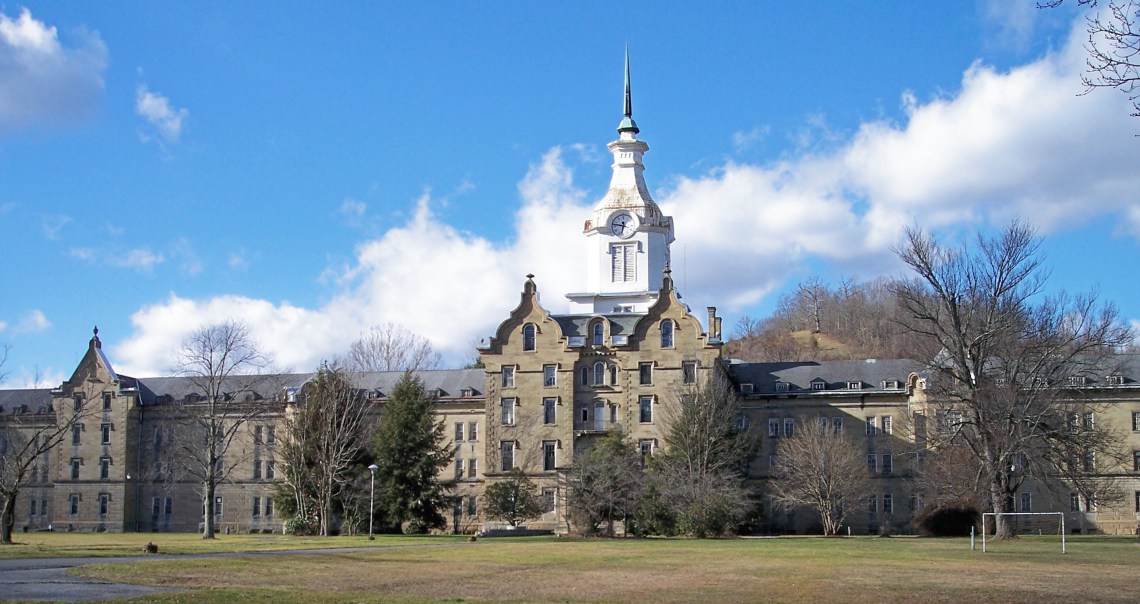 The Trans-Allegheny lunatic asylum is a stunning testament to Gothic and Tudor Revival architecture. It sits on 666 acres and, except for the Kremlin in Moscow, it is the largest building constructed of hand-crafted stone masonry in the world. Its walls are two and a half feet thick, designed to muffle the screams of people in mental agony.

Due to the endless reports of paranormal activity within its thick, soundproofed walls, many consider it to be the world’s most haunted building.

According to its designers, the asylum was originally built according to the “Kirkbride Plan” of the mid-1800s. The wings of the hospital are long, airy, and designed to provide ample light.

Instead, patients entered a world of darkness.

In the mid-1800s, it was very easy for an angry husband or spiteful family members to get someone committed to a mental institution. In fact, people would receive money simply for dropping off potential patients, no questions asked. Some of the actual reasons that people were confined to the Trans-Allegheny Lunatic Asylum include:

Once confined, inmates were subject to an array of abuse and torture. Methods included:

Most notorious of all, though, was the “icepick lobotomy” pioneered by and performed by Dr. Walter Freeman, known as the “father of the lobotomy.” This involved shoving an icepick through a patient’s orbital socket into their brain. In some cases it was thought to calm down the patient, but in almost all cases, it rendered the patient drooling and permanently brain-damaged. The procedure was so common at the asylum that during a single two-week period in the early 1950s, one doctor performed 228 icepick lobotomies.

The building was originally designed to house about 250 mental patients. Over the years it became more and more crowded to the point that by the early 1950s it housed an estimated 2,600 patients—more than ten times its official capacity. Often the same bed was used by three different patients over the course as a day, as they were forced to sleep in shifts.

There were numerous reports of suicides and murders and rapes as the situation spun out of control. In 1995, the Charleston Gazette did an investigative piece that found the asylum to be “dirty and unkempt,” with many patients left naked and “confined to dirty wards with bathrooms smeared with feces.” It wasn’t until a follow-up piece in 1992 that officials put pressure on the asylum to close, which finally happened in 1994.

Paranormal activity at the asylum

Over the years, but especially since the asylum closed, the following paranormal activity as been reported:

But of all the paranormal activity, the most frequent and most famous is that of a girl named Lily. She wears a white dress and appears to be about nine years old. It is believed that Lily was a girl whose mother gave birth to her while at the asylum and that Lily died at age nine after spending every day of her life confined beneath its oppressive stone walls.

Lily is said to talk, to roll balls along the floor, to switch on flashlights, to play a music box, and to often giggle in a way that observers describe as simultaneously sweet and horrifying.

The Trans-Allegheny Lunatic Asylum has been featured on all the popular paranormal shows. It has been open to the public as a tourist destination since 2007.

It stands as a living testament that sometimes, mental torture never dies—in fact, it only gets revisited on the living…forever.