Although gargoyles have recently become popular and friendly cartoon heroes, it wasn’t always this way. For thousands of years they’ve been used as decorative waterspouts on buildings. At some point in the Middle Ages they were adopted by the Catholic Church as snarling stone figures designed to terrify nonbelievers and ward off evil.

Here are 22 wild facts about these ancient stone demons known as gargoyles.

1. Throughout history, gargoyles were primarily used as waterspouts.

Although the gnarled demon-dog-looking monstrosities that bedeck cathedrals throughout Europe serve a striking visual purpose, the reason they jut out from buildings with their mouths open is that they are nothing more than decorative waterspouts. Gargoyles were designed to protect buildings from water erosion. They are basically rain gutters with ugly faces.

2. The word “gargoyle” is based on a French word meaning “throat.”

The modern English word “gargoyle” is derived from the French word gargouille, which means “throat” or “gullet.” It also shares the same root with the word “gargle”—and a gargoyle’s job was basically to gargle water and spit it down at the commoners.

3. There’s a Christian legend about gargoyles involving a saint who slays a demon.

As the story goes, the French king Clotaire II, who ruled in the 600s, captured a monstrous, bat-like creature with the help of a crucifix, then returned him to the town center. After attempting to burn the monster, they realized its head and neck would not burn, so they placed it on the side of the local church to ward off evil.

4. Gnarled, demonic-looking statues that don’t serve as waterspouts are known as “grotesques.”

There are plenty of warped and scary-looking statues throughout history that aren’t attached to the sides of buildings in order to run off water. These sculptures are known simply as “grotesques” rather than gargoyles.

5. Sculpted creatures that are a hybrid of two or more animals are known as “chimeras.”

If you have a dog’s body with a human face on it and a dragon’s tail, what you’ve got there is called a “chimera,” friend. It can serve as a gargoyle if it can also serve as a drain gutter.

6. During the Middle Ages, some gargoyles had human faces and were modeled after real people.

Although they were predominantly fashioned as scary creatures, many gargoyles were commissioned to represent living beings—sometimes local benefactors, sometimes local parish priests.

7. The world’s oldest gargoyle is located in Turkey.

A 13,000-year-old stone crocodile found in what is now Turkey is considered to be the oldest gargoyle in existence.

8. In ancient Egypt, gargoyles typically took the form of lions.

Gargoyles served as drain spouts in ancient Egypt, most embodied in the shape of water-spewing lions.

9. The Temple of Zeus in Greece originally had 102 gargoyles.

As in Egypt, ancient Greek gargoyles typically were of lion’s heads. Of 102 lion-like gargoyles originally at the Temple of Zeus, most were so heavy that they eventually eroded and snapped off the building. Today 39 of the original gargoyles remain.

10. Gargoyles became a fixture of European Gothic architecture around the year 1200.

The “Golden Age” of gargoyles came during the European Middle Ages and flourished alongside Gothic architecture from around the years 1200-1500.

The monk known as St. Bernard of Clairveaux was none too thrilled with the gargoyles carved on his monastery:

What are these fantastic monsters doing in the cloisters before the eyes of the brothers as they read? What is the meaning of these unclean monkeys, these strange savage lions, and monsters? To what purpose are here placed these creatures, half beast, half man, or these spotted tigers? I see several bodies with one head and several heads with one body. Here is a quadruped with a serpent’s head, there a fish with a quadruped’s head, then again an animal half horse, half goat….Surely if we do not blush for such absurdities, we should at least regret what we have spent on them.

12. Gargoyles were said to represent dangers from which the church would protect the faithful.

In the Middle Ages, most of the public was still illiterate and thus could not read the Bible or understand most church teachings. Seeing hideous winged beasts scowling outside a church’s doors served as a threat of all the dangers that the church existed to protect Christians from.

13. Gargoyles were also thought to ward off evil.

In this sense they served as almost an “evil eye”—they were evil-looking creatures that were designed to keep evil at bay.

14. Some gargoyles were fashioned like pagan deities in order to lure pagans toward Christianity.

According to legend, some gargoyles were intentionally sculpted to look like pagan gods as a way to attract nonbelievers into the Church. 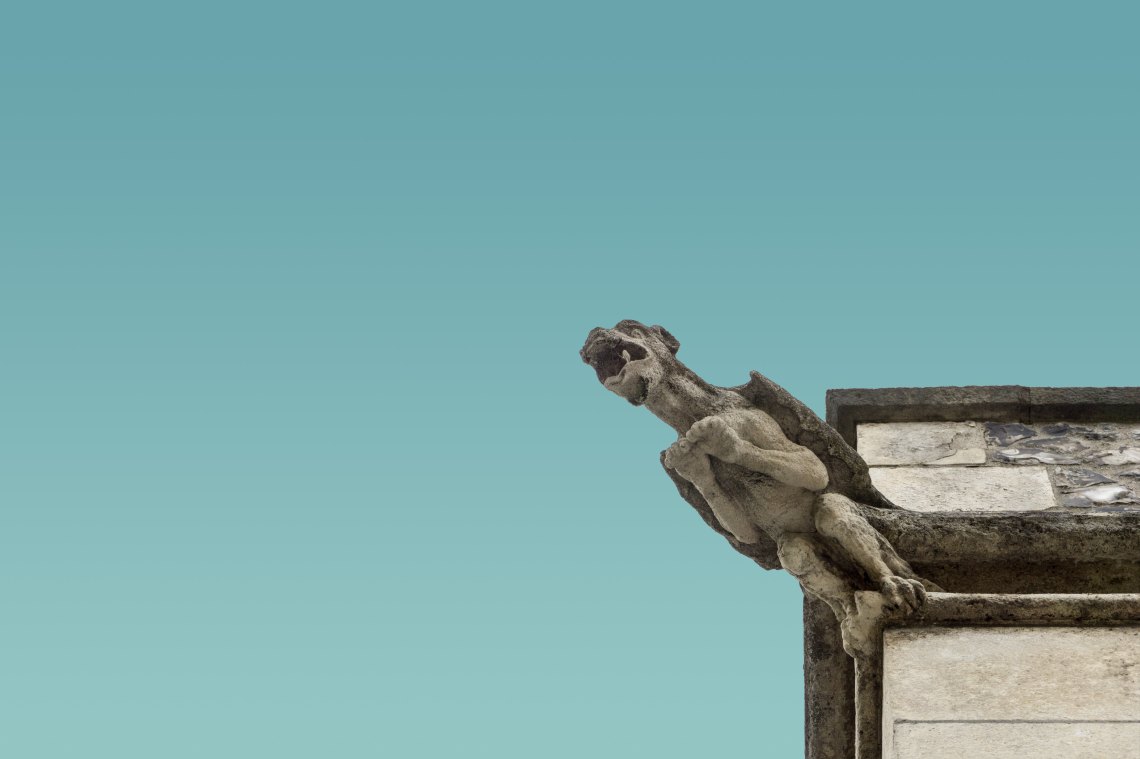 15. Gargoyles were typically carved on the ground and only put into place as the building was being finished.

They were way too intricately carved to have someone get a nosebleed or, God forbid, fall to his death during the carving.

16. Although the Cathedral of Notre Dame in Paris was built during the Middle Ages, its famous gargoyles weren’t added until the 1800s.

The screeching winged gargoyles at Notre Dame are perhaps the world’s most famous. But although the cathedral began construction in the year 1153, the gargoyles weren’t added until the 1800s—although the sculptor purposely deigned them so they’d look like they came from the Middle Ages.

17. If you’d like to see a lot of gargoyles in the USA, head to Pittsburgh, PA.

Pittsburgh was caught up in the Gothic architecture revival of the late 1800s and as a result has countless gargoyles and grotesques dotting its downtown landscape.

18. The concept of gargoyles as monsters who come to life is a fairly recent one.

For most of antiquity until, oh, a hundred years ago, stone gargoyles remained just that—inanimate objects. But more recently they became sort of like the golem of legend—stone creatures that would spring to life and exact vengeance when necessary.

19. There have been several movies featuring gargoyles as main characters.

In 1932’s Maker of Gargoyles, a stonemason builds two gargoyles who ransack a town and later murder their maker. In 1972’s Gargoyles, they are depicted as a race of demons created by Satan to torture mankind. And then of course there’s the famous Disney cartoon show of the 1990s in which gargoyles are happy and well-adjusted superheroes.

20. A French chapel replaced its gargoyles with gremlins.

While France’s Chapel of Bethlehem was being refurbished in the 1990s, a sculpture decided to replace the building’s decaying gargoyles with creatures based on the movies Gremlins, Alien, and UFO Robot Grendizer.

Washington’s National Cathedral, as the result of a kids’ design contest from the 1980s, now boasts its own Darth Vader gargoyle who not only breathes heavily—he spits rainwater with the best of ’em.

Encounters I’ve Had with Ghosts

4 Types of Erotica That Are Surprisingly Good

I Found Jennifer Lawrence’s Cell Phone In A Cab