“You need to buy some new lingerie,” my best friend, Katie, told me over our weekly dinner at Applebees. I had been complaining about how my three-year relationship was starting to feel stale. So she started throwing out suggestions for how to spice up our sex life.

I guess my phone — which was sitting on the table between us — had been listening to our entire conversation because the next time I opened Facebook, there was an ad for leather lingerie. I didn’t think it was creepy at the time. I took it as a sign from the universe, telling me Katie was right. So I ordered the stupid lingerie.

Unfortunately, it didn’t help our sex life. If anything, it made me realize how bad the relationship had gotten.

A few weeks later, when I met up with Katie for another dinner, I told her about my biggest fear. That my long-term boyfriend was cheating on me.

I had suspected him of cheating with a girl at his work for a while, but I had never Googled signs your boyfriend can’t be trusted or anything like that. I had only spoken the words aloud. But after my conversation with Katie, Facebook suddenly started recommending me self-help books. Cheating For Dummies. The Art Of Unfaithfulness. How To Catch Him Lying.

Again, I thought it was the universe speaking to me, warning me. I confronted my boyfriend shortly after that. It turned out he was cheating on me. For over a year. He promised he would stay away from the other woman and try his hardest to become a better boyfriend, but I told him to shove it. I wasn’t going to waste my time with someone who treated me like that.

The next time Katie met me for dinner, I used it as a venting session. I complained about how upset I was, how angry, how disappointed.

More than once, I said the words: “I hate him. I want to kill him.”

After that conversation, my ads got weirder and weirder. I would see an ad for rat poison one day. Ads for handcuffs and twist ties and dock rope the next day.

Once, there was even an ad for a handgun. That’s when I decided I’d had enough.

“What the fuck is this?” I said to myself, alone in my empty bedroom. “It’s bad enough I have to see memories with him whenever I open Facebook. I don’t want this shit too.”

Even the site knew they had crossed the line. When I clicked a button to hide the ad, a popup appeared, asking me why I wanted to hide the ad. The options started out normal.

But the last two options were much more disturbing. 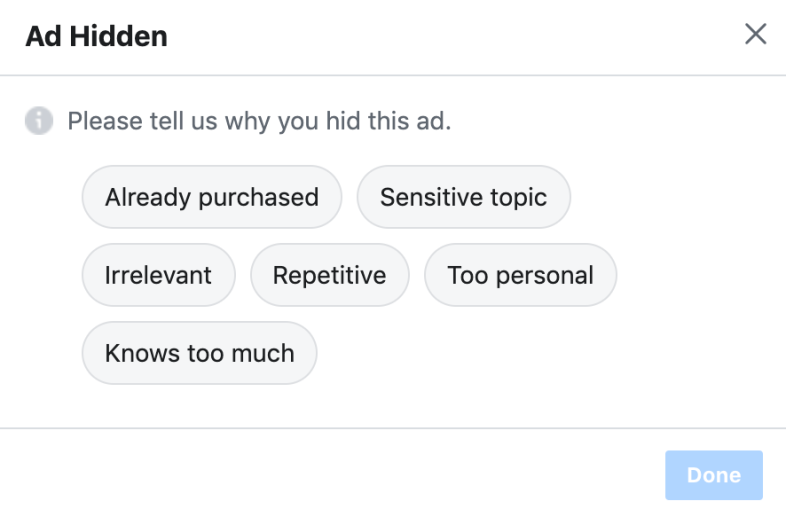 Click on hide ad the next time you visit FB if you don’t believe me. Then you’ll see this popup too.

I don’t know about you, but seeing an option like this, knowing that the site knows they’ve been crossing boundaries, scares the hell out of me.

So this is my warning to all of you. If you’re on Facebook, be careful what you say — online and in person.