By January Nelson Updated November 28, 2018
Daniella Urdinlaiz
From all the different types of dragons to the most famous dragons in history, you are going to learn what you wish your teachers taught you in class.

Like dogs and cats, not every dragon is exactly the same. Different types of dragons are determined by the number of limbs they have or the other creatures they resemble.

These dragons are a hybrid, part snake and part bird. They have the body of a serpent from their head to their tail, and their wings (similar to bat wings) sprout from their neck. Depending on the depiction, they might have forelimbs, but they never have any hind limbs.

In Middle English, Drake actually means dragon. This type has four limbs. They have low slung bodies with their bellies skimming the ground. They look similar to lizards, but are much larger.

These dragons are water serpents with multiple heads. Every time one is chopped off, another will grow back in its place. Sometimes, these dragons also have additional tails, wings, or arms.

These dragons possess great wisdom. They contain the body of a snake, belly of a frog, scales of a carp, head of a camel, horns of a giant stag, the eyes of a hare, ears like a bull, a neck like an iguana, paws like a tigers, and claws like an eagle. 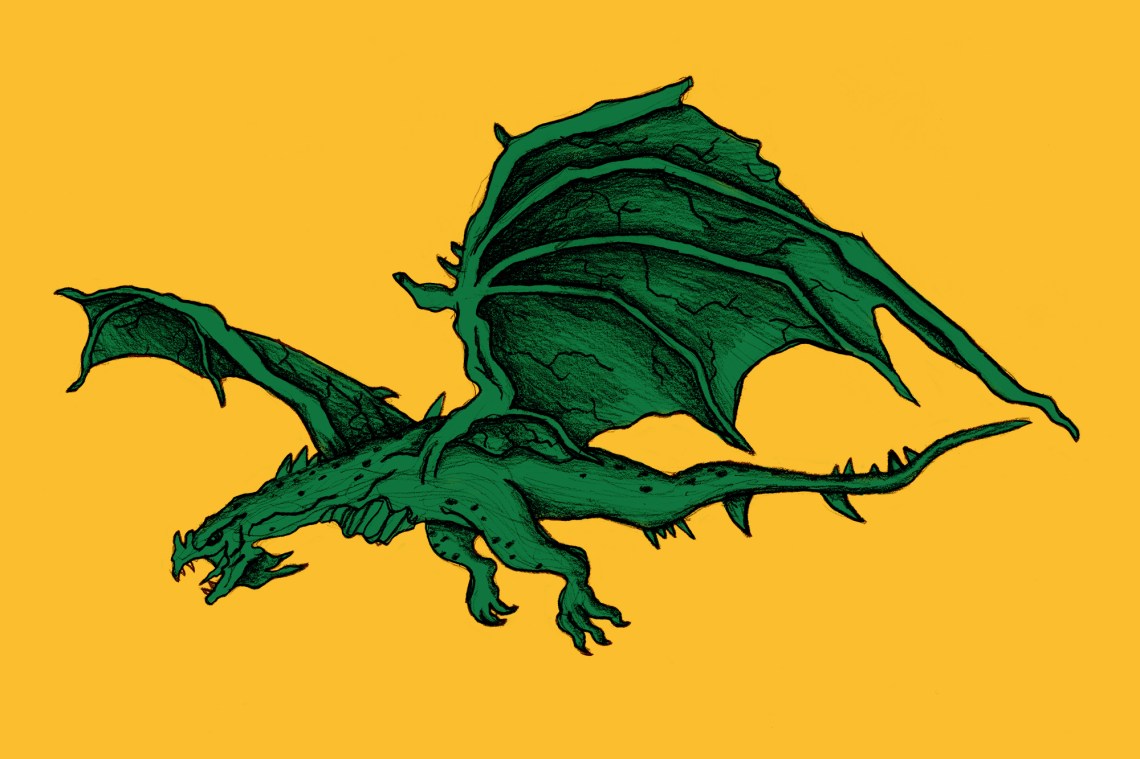 These dragons are highly aggressive. They possess the head of a dragon (which is wedge-shaped like a crocodile), the wings of a bat, and a long serpent’s tail. They can either have lizard legs or bird legs.

These dragons have human traits. They are tripedal with shortened forearms, which means they are unable to walk on all fours like other dragons. In some depictions, they will also have humanlike digits with fingernails and toes. Not only do they possess physical human qualities, but they also take on human behaviors as well.

These creatures are hybrids of avian species and serpents. They will either have the head of a dragon, the tail of a dragon, or the ability to transform into a dragon. They can also contain the traits of other animals, so they might have cobra fangs or crocodile heads.

These dragons are the servants of sorcerers. They have crocodile scales covering their body and a barbed tail. Their heads can contain either horns, antlers, or a crest. They can also spit fire and other deadly fumes.

These dragons have the head of a horse with a mane covering their neck. Their heads are oversized with bright eyes that burn like coals and their mouth is wide enough to swallow any human man or woman whole.

These dragons are serpents with coils that can wrap around hills. They can exhale noxious fumes and move at a quick speed. You can spot them by their horns, large fangs, and bright, wide eyes.

Some people do not actually consider these creatures to be dragons because of their shape. They look more like serpents because they do not have any legs or arms. They resemble giant snakes.

Oriental dragons are not dangerous. They are guardians. They protect the heavens and guard the people. They have four legs with four toes on each foot and a serpentine body without any wings attached.

These dragons look exactly the same as Western dragons — except they are much smaller in size. They range from the size of a finger to the size of a human. Despite their size, they are dangerous because they hunt in packs and have poisonous blood that is lethal when it touches your skin.

These dragons are either red or green with a yellow underbelly. They have scales covering their body and leather wings. They have poisonous breath, a beak that can kill, and eat anything they see moving.

The Most Famous Dragons

It doesn’t matter if you’re reading stories from Japan, China, Persia, or Europe — because there are dragons in each one. Mythology is filled with stories of winged creatures, both good and evil. Here are some of the most notable ones:

This dragon comes from Japanese mythology. It is an evil dragon with eight heads and eight tails. Every year, he devours a maiden as a sacrifice.

Fafnir comes from Norse mythology. He used to be a greedy dwarf, but a curse transformed him into a dragon.

This dragon comes from Chinese mythology. It is an underworld dragon who guards buried treasures, specifically a magical pearl that multiplies when touched.

Zmey Gorynych comes from Slavic mythology. It has three heads and seven tails. It was famously attacked by the warrior Dobrynya Nikitich, but it took three full days of fighting before it was slain.

Jawzahr comes from Persian mythology. It spends all of its time in the sky, chasing around the sun and the moon. Whenever a solar eclipse occurs, it is said that Jawzahr has finally caught up to the sun and moon and swallowed them.

Ladon comes from Greek mythology. It had 100 heads and wrapped itself around a tree to guard golden apples. He was famously defeated by Hercules after he dipped an arrow into the gall of hydra and stuck the poison into Landon’s flesh.

This dragon comes from Polish folklore. It gets its name from a peasant boy named Krak who defeated it. Krak left a meal of three roasted sheep full of sulfur and hot spices beside the dragon’s cave. When it ate the meal, its gut exploded, killing it.

This dragon is the rainbow serpent who holds up the heavens. Whenever a rainbow is seen in the sky, it is the twin personalities of Ayida-Weddo with the red part of the rainbow identifying as male and the blue part as female. It is also said that Ayida-Weddo’s droppings help nourish the land and the mountains.

Kulkulkan is a feathered serpent from Mesoamerica. It is considered the protector of craftsmen, the rain-maker, the wind-blower, and the fire-bringer. However, this peace-loving dragon was not a fan of bloodthirsty sacrifices.

Kur comes from Sumerian folklore. It lives in the void above the earth’s layer and below the sea. Because of its home underground and its wicked ways, it is commonly associated with the underworld.

If you are in the mood to watch dragons flying around and spitting fire, then you should watch one of these classic films.

How To Train Your Dragon

The Lord Of The Rings

The Chronicles Of Narnia

Curse Of The Ring

Jason and the Argonauts

300+ Unique Words You Can Use To Impress People

Everything To Know About The Tsuchinoko, The Creepiest ‘Animal’ You’ve Never Heard Of

If You’re Confused About Your Enneagram Type, Read This