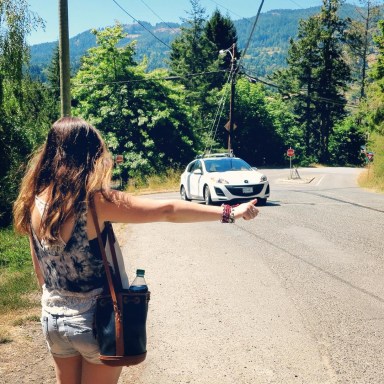 You know how it goes: Girl meets boy. Boy joins the Marines. Yada, yada, yada. They elope. Seven months later, they split. A classic love story! I’ve been a citizen of Singlesville for over two years now—ah, yes, plenty of time to reflect.

Whether you’re married, divorced, somewhere in between, or nowhere near the scene, below are seven things I learned from my seven-month marriage. Take it or leave it, just don’t judge it like the judge who smacked the gavel to solidify my divorce.

1. A relationship can be lonelier than being alone.

After years of being long-distance, shrouded in feelings of loneliness, being married was supposed to be bliss. No longer alone, I’d have my person by my side 24/7. But how do you put into words the feeling of looking into someone’s eyes and knowing they don’t actually see you, and that they never really did? A relationship built on pixels and “you still awake?” texts didn’t translate well into the physical realm. I quickly realized I preferred to be alone rather than to be with someone who made me feel lonely.

2. My joy is not dependent on anyone else.

After years apart, much of my time was spent focused on an inevitable joy I’d feel when we could finally be together. But, again, I realized I was happier in moments spent alone or when I was building on other relationships in my life. This romantic fantasy was just that—a fantasy built up in my head, when in reality we were hella mismatched. I spent so much time lying to myself, thinking this person brought me joy, when in reality, he really only brought me attention. But attention doesn’t equal joy unless you’re on a stage, holding a mic, and people are laughing at jokes you’re making. That shit is hella joyful. Also, milkshakes. Joy CITY, amiright?

3. Revisiting the past doesn’t help.

Constantly digging up the past leaves a lot of messy dirt strewn about. It’s only when we rest that we’re able to see growth. When I took a step back, I finally saw the flowers start to blossom. Under the dirt was a relationship that was okay but it wasn’t meant to last forever. And that’s fine. It was dirty and messy and provided a foundation for my own personal growth. Now I’m a sunflower leaning towards the sun—not another person—standing strong and tall (well, short, but you get it), knowing that forward-facing is the only direction for me.

Honestly, I knew within weeks that I’d made a mistake in marriage. But what would it look like to others? Maybe I could be convinced otherwise. Maybe if we spent more time together, everything would work itself out. To be honest, the only reason my marriage lasted even seven months was due to the fact we were long-distance for the first 4.5 months of it. I waited until we were together again to see if I felt differently (I didn’t) before officially ending it.

Ladies, fellas, let me let you in on a little secret: Your gut knows what’s up. Listen to it. I had people congratulating me left and right on my marriage. My gut was like, What the heck is there to congratulate me for? I’ve made a terrible mistake! I felt so trapped in this decision I’d made and I lied to myself. A lot. In fact, I had super cold feet the night before we eloped. And when I expressed concerns to my ex the night prior, he essentially gave me an ultimatum: We elope tomorrow or we’re through. Red flag city, I know. My gut was screaming at me, GIRL, TAKE THE MIDNIGHT TRAIN TO GEORGIA—GET OUTTA HERE. But nope. I ignored my gut and immediately regretted it.

People who say marriage is built on compromise are people who love making excuses. “Marriage is hard work,” they say. “You have to give up things you love to be happy together.” I call bullshit. Compromise is agreeing to go to the beach instead of the park for a day. Compromise is making tacos for dinner instead of pasta. Compromise should never, ever bleed into your values, hopes, dreams, and desires. If deep down you feel like your person is holding you back from what you truly want out of life, do NOT settle. You do you. Always.

7. A vow can be broken, but my spirit cannot.

My ex tried to guilt me into staying with him because we “made vows.” Well, sure, a vow is a nice sentiment. But you know what? I vowed to not buy ice cream during this quarantine because pints never last more than two days in my freezer. Spoiler alert: I broke that vow. Because ice cream is hella delicious and #YOLO. And I broke my marriage vows for the same reason. Vanilla was getting old and I needed a new, nuttier flavor in my life.

It’s okay to get swept up in something and realize that maybe it wasn’t the best decision. Learn to be true to yourself always, always, always! I’ve also learned I hate when people say they’re “sorry” in response to my telling them I’m divorced. Don’t say you’re sorry. Rather, I’d like you to congratulate me, because I’m proud to have done something many others are too afraid to do. Being alone is scary, but being lonely in a relationship is worse. I look forward to my next relationship, knowing what I know now. But until then, I’m happily divorced and will be holding an “I said, ‘I DO’ and then I said, ‘ACTUALLY, I DON’T ANYMORE,’” party post-corona. Hope to see you there!

Crawling Back Through Us

For My Next Chapter, I Shall Prioritize My Self-Worth