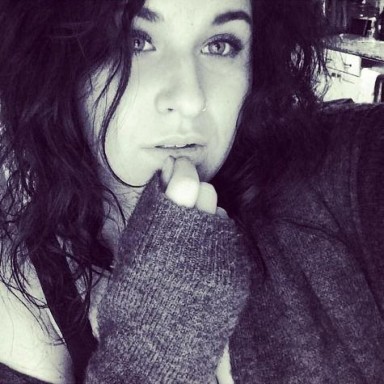 If your skin was paper and their lips could slice, you would have let them plant paper cut kisses all along your entirety. You would have let them bleed you dry, giving them every last drop of who you are until your sinews wrinkled in on themselves with nothing to hold their form. You would have given anything and everything you could offer, if only it meant feeling whole. You spent the years as a puzzle set with missing pieces, desperately looking in all the wrong boxes for pieces you might be able to smash together in the hopes of completing your picture. When you finally met someone who seemed like an easy fit, you jumped at the chance to put all your pieces in their lap.

You let them make a home out of the space between your lips and made sure to blanket them with the heat of your flesh. You didn’t stop to think that there might not be enough room for two in your skin. The body is meant to hold only one, but one is a solitary number that often haunts the lonely. You pulled and stretched and compromised yourself just to feel a little bit less isolated. The way they moved became your favorite poem and you wanted to ink-press their words into your bones. There were flowers in their footprints and tidal waves in their touches. You would have taken a garden in your hair and a tsunami flood your bedroom if it meant they wouldn’t leave you behind.

Somewhere along the way, you started throwing little pieces of yourself like a trail of breadcrumbs for them to follow. They stood far behind the trailing, calling to you and warning you that there was only danger to come if you kept on blazing. But you continued to dice yourself into bits and throw them behind you, never stopping to heed the warning they were trying to give you. You gave away more than you could spare and more than they asked for, but somehow it seemed appropriate to give them every square inch of yourself. The idea of being someone’s something left you reeling and breathless. They caught the breath that you lost and placed it in your hand. They told you they were not worth a single gasp lost and they wanted you to have it. What they didn’t understand was that they were more to you than the tightness in your chest. They were the release of a full lung. They were your deep breath in, slow exhale out. You thought they were your saving grace, because you hadn’t yet realized you could breath on your own.

They had all of you without asking. You held no pieces back. Everything was on display and up for grabs. You wanted to share yourself with them, but when you got caught up in it all you realized that instead of sharing, you gave it all away. You gave away too much, and when they made their final exit, all you had left as proof that they had ever been there was skin you had stretched far too wide in the hopes of making them into a part of you. They didn’t take your pieces with them. All the things you gave them sat in a pile by the door, waiting for you to put it all back together. The songs you shared with them on that rainy Sunday. The passages from your favorite book you read with their head in your lap. The secrets coffee shop you never took anyone to. Even after they left, the little pieces you gave them held a different taste than they did before. All the pieces were still yours, but in a way that seemed changed.

Eventually, you found it in you to put all the pieces back together. There’s evidence of a break down, and maybe even a few holes from the things you can never get back. But the structure of you is still there. The invisible scars along your neck and hips from their apologetically razor sharp touch serve as a reminder that cuts and kisses will never be synonymous. You wear them as a badge of honor to the next trailblazer to come into your life. You learned that there are some pieces of yourself that will have to remain yours alone. Glimpses here and there are negotiable. But in the end, you finally understand the difference between sharing parts of yourself, and giving all of yourself away. This time, you won’t be so quick to divvy up all that makes you you.

I’m Isabel. I’ve got an unhealthy adoration for coffee, music, and elephants. I’m in a very committed relationship with writing, and yes, we are very happy together.