About a month ago, the texts started pouring in, telling me that I had a twin walking around Long Island. A girl that looked just like me, down to the floral tattoos across my arms. 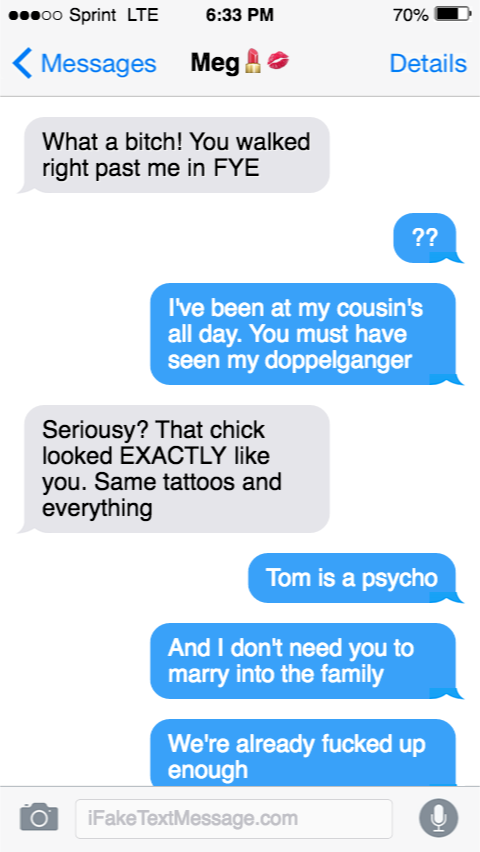 The rest of the conversation isn’t important enough to screenshot. We talked about how Tom, my 19-year-old cousin with the intelligence of a 30-year-old, was doing some weird shit inside of his basement.

Back then, I didn’t know what he kept down there. I hadn’t noticed the hair he’d been hoarding from my pillowcase or the spit taken from my toothbrush. I was clueless, innocent.

All I knew was that my best friend, Meg, wasn’t the only one that messaged me about seeing my twins. There were text messages from aunts and neighbors and classmates I barely talked to.

Even this girl Dana, who I didn’t even realize had my number, contacted me. We used to take dance together in high school and haven’t spoken since. She was a virtual stranger. 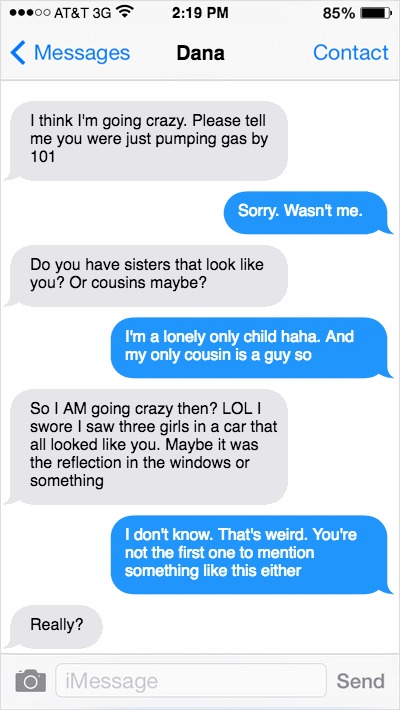 The rest of the conversation didn’t last long. It mostly consisted of me explaining what Meg, and the rest of the town, had been saying about swearing that they’d seen me out at the bowling alley or bar or beach with red or black or platinum hair.

It seemed like the hair was the only difference. Everything else was identical, from the freckles on my cheeks to the limp in my leg (from an accident when I was a kid and Tom had shoved me down a slide).

Sure, I thought it was weird that everyone kept mistaking other girls for me, but I didn’t care. I wasn’t the type to complain when another person showed up wearing the same dress as me. I wasn’t jealous of any of them or even all that curious. Honestly, I didn’t think much of it.

I certainly didn’t think it would change my entire life. I didn’t think I would find what I found in the basement. 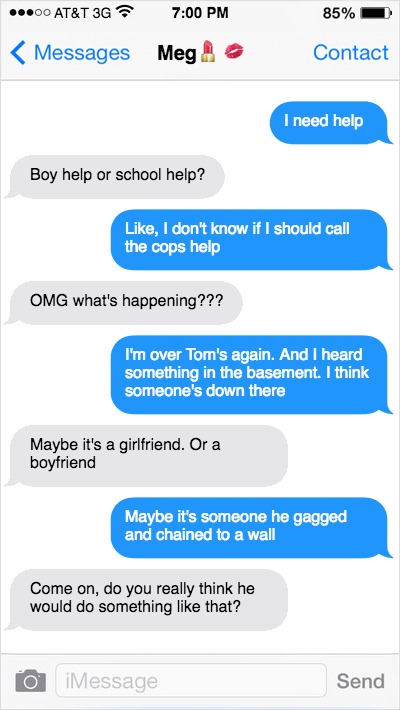 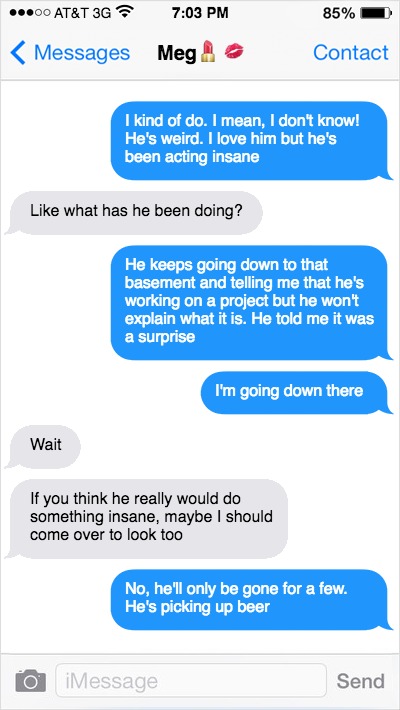 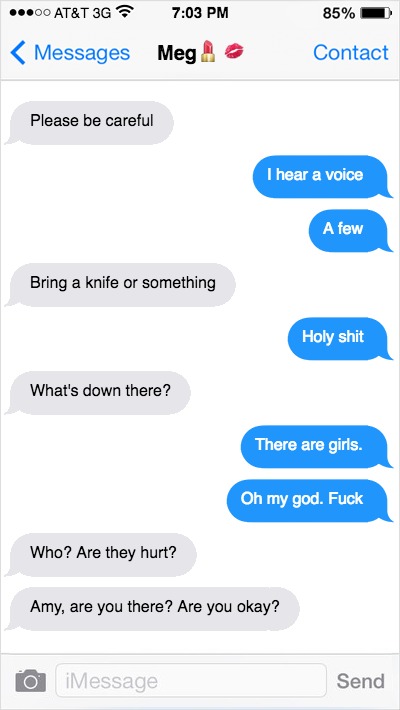 I didn’t answer her. For an hour. Two. Three. I’m surprised that she didn’t end up calling the cops, but she called everybody else. My parents. My home phone. Tom’s phone. And she never got an answer.

When she finally got her text back — after I’d seen what was hidden in the basement, after the group of girls down there had formed a circle around me and shoved — she didn’t like my answer. 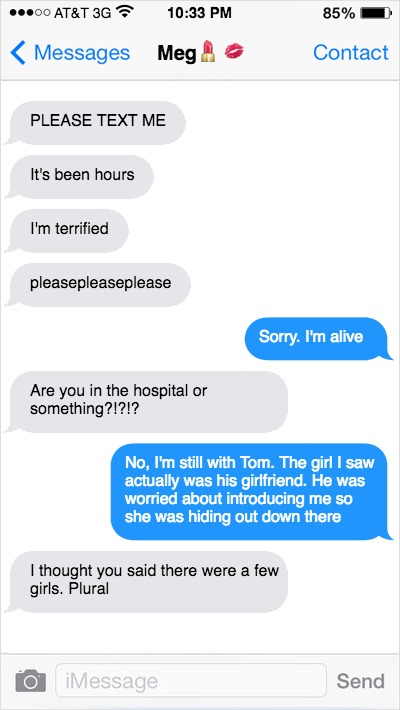 I told her that I was wrong, that there was just the one girl with her top off, but she didn’t buy it. She was suspicious, asking me question after question. I had to power the phone down in order to get her to shut her trap.

She knew too much, just from my earlier text messages. That’s why, the following night, Tom did what he did next. He had no other choice. 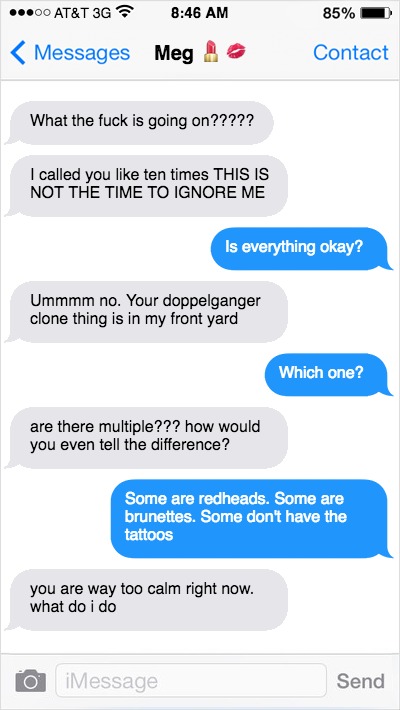 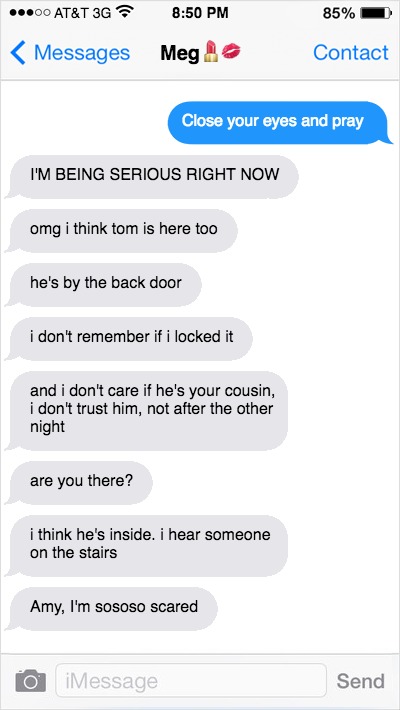 For the record, all of us clones do look the same — for the most part. Tom altered some of us, mostly our hair color because it was the easiest, in order to tell us apart. He thought it would be easier on him.

He didn’t realize that his experiment, that creating human life out of a few strands of DNA, would be hard in so many other ways. 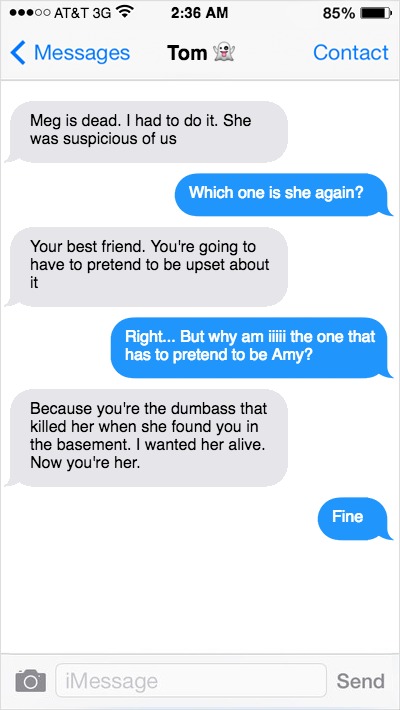 When Tom came home, he asked me to read through Amy’s texts, to document them in this diary, in order to get a better feel for who she was. In order to learn more about her so I could start acting like her.

But I’m not her. And I can’t imagine my sisters letting Tom live for much longer.