I have been told in the past that I like to point out all the flaws that men have, I KNOW. I have been told in the past that I don’t say a lot of nice things about men, MAYBE. I have been called out for being mean and not thinking about a man’s perspective when it comes to dating, GET OVER IT. Fellas, you have to realize, we are the easy ones. You are the ones that are making it extremely difficult to date, and with that you are causing us to drink copious amounts of wine and to consider joining a convent. We are just looking for love in a (hopeless) internet place.

With that said: ladies, we are screwed. If you are looking for a serious relationship or simply just a man to take you to Sheetz on a wild night out, you have a 1 in 962 chance at finding a normal gentleman. While I go on these dating apps out of pure boredom (and to see if I can catch any of my coworkers on there), some girls are looking for the real deal. For that reason, I will keep fighting for those girls who are looking for love in an internet place. I just have to bring to light what men are doing wrong on dating apps. I will be providing examples based on what I personally have found on these dating apps, because frankly, I don’t think half of the people believe me when I say I attract interesting specimen wherever I go.

So here we go. Men, take notes. And women, enjoy. This is what NOT to do on dating apps:

Do not freak her out by saying too much, but you have to at least give her something to talk about. She can’t be doing all the work here! Example: Please calm down dude. Way too talkative for anyone to handle. Great convo. 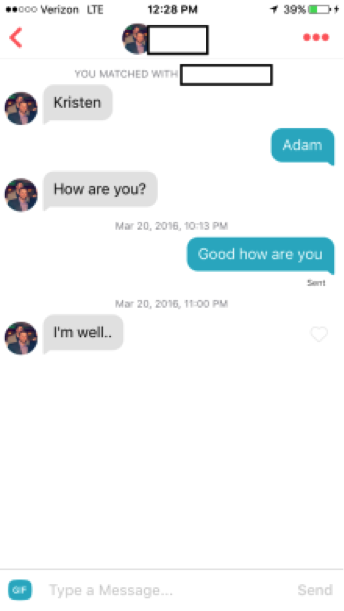 Pick up lines are awesome… when they are done right.

If you are going to use one, make sure it is a good one please and thank you! Example: Do not mention sex, your penis, or using your penis on a person you have never met. 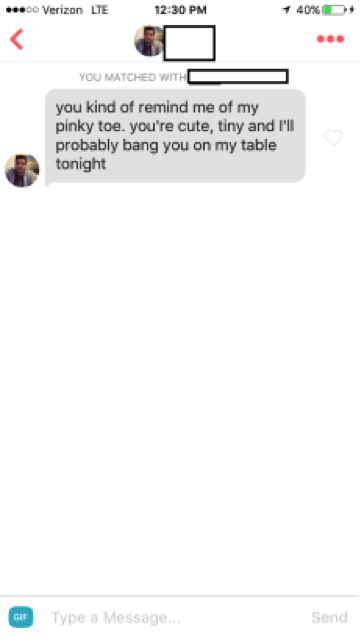 Again, maybe try using a reliable source for your pick up lines.

Google, Urban Dictionary, tweet at Justin Timberlake for one. Don’t ask one of your doctor buddies for one. Example: You should not compare a girl to an internal body part. 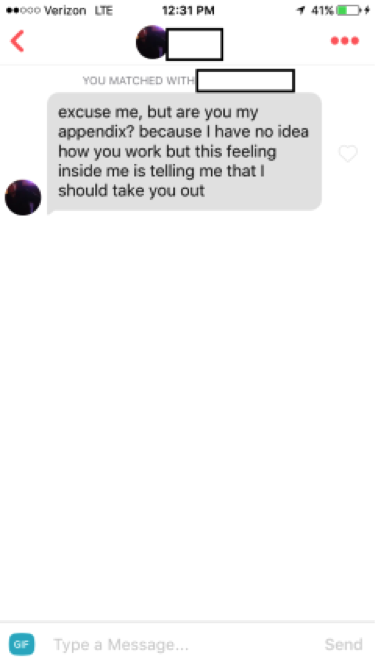 Don’t throw your number out there too quick – like within the first two messages.

The thing about giving out your number too fast – it gives off the image that you are giving it out to every girl out there. Also, puts a lot of pressure on a girl to give out theirs. Pump the breaks a bit and see where it goes. Example: Gentleman asked how my day was and I received all of this. Literally sent this man ONE message. 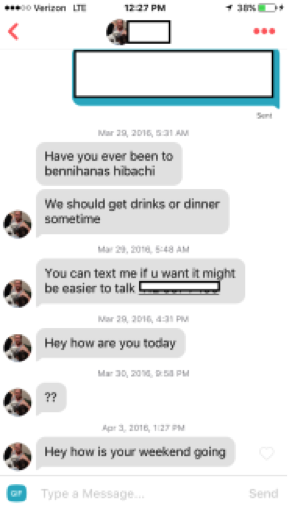 Pay attention to who you are talking to!

As in, you should probably remember if you met the person, bought them a drink, hung out with them and their friends for a whole night, and probably still have their number in your phone. Example: Clearly he wasn’t paying attention and I stopped caring. 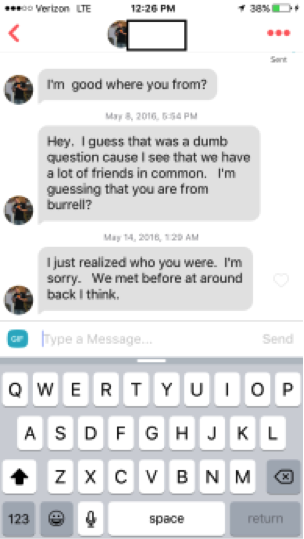 If you are going to use a GIF in the first message, chose wisely.

While can be pretty funny, this is also your first message, so a stranger doesn’t know your personality. Go easy on them before you throw it all in to see what their personality is like. Example: It was a Grandma giving a strip tease. 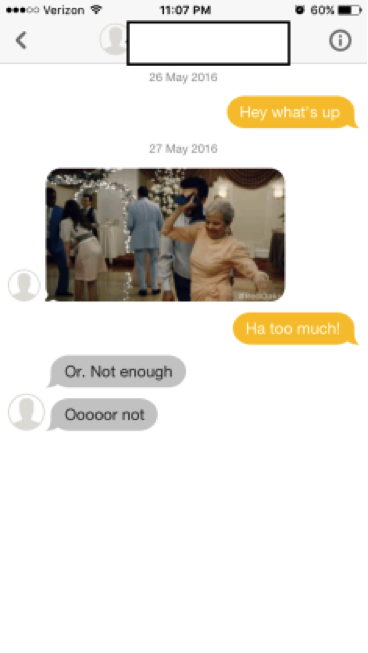 Put the phone down if you are drunk, cannot speak proper English, or just shouldn’t be allowed around women.

Just think before you message someone. Remember, first impressions mean something! Example: I don’t honestly know what this was, but just don’t do it. 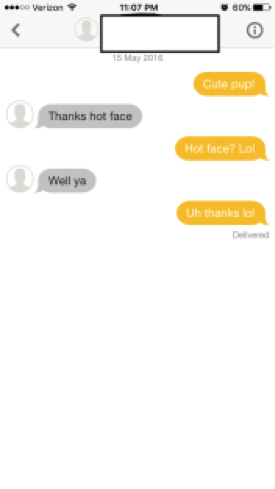 Keep in mind – not everyone is addicted to their phones.

Some people have it set so you do not receive notifications from apps. Some people do not check their apps everyday. Some people do not have their phones super-glued to their hands. Pump the breaks and give it a few days to see if they message back before you go crazy with the messages. Trust me, they received them. Example: I didn’t go on Tinder for a week and this is what happened. 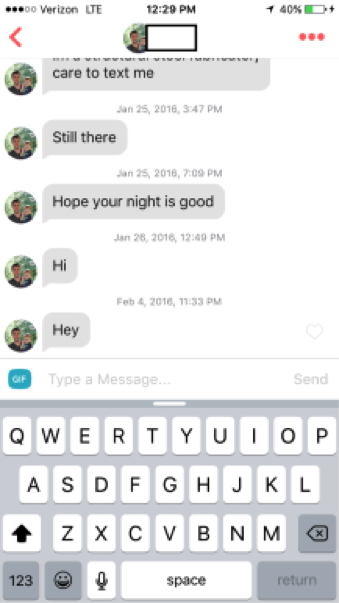 Put a girl’s mind at ease and ensure her you are not a serial killer.

We have all seen scary movies, we have all heard about the Craigslist killer, we have all met one nut job. We are not joking when we ask if you are a serial killer. Example: That is not the answer we want to hear. 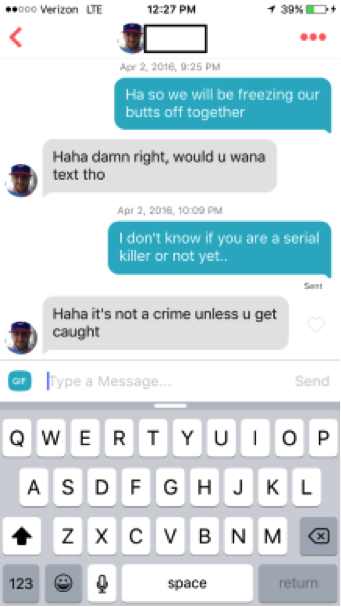 But seriously, she would like to know that you aren’t a serial killer.

Again, we would like to know that you are not a criminal with a rap sheet. At least give us a credit report and background check before we meet you. Example: That “JK” came like a three hours later. 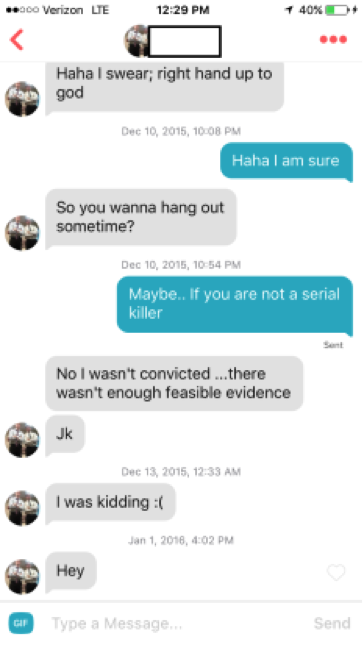 If she doesn’t message you back, she is just not into you bro.

Unfortunately, you are going to find that some girls do not message you back. Maybe you shouldn’t have went into length in every single message before that about how your day was, what you did with your day, what you ate, how you ate it, etc.. Whatever the case for her not ever replying back, sometimes you just have to cut your losses. Example: If you don’t have anything nice to say, don’t say anything at all. 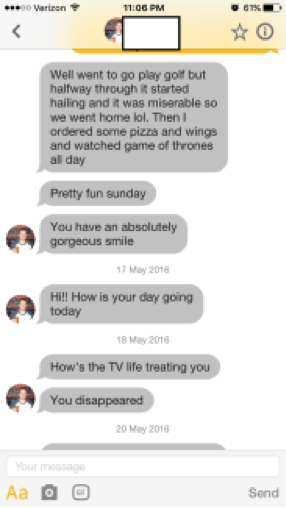 But seriously, she is not into you.

Remember, she is still receiving these messages and not responding. There is no error in the system, it is not stuck in cyber space, she sees them and is still not taking the time to write you back. Example: Showering her with compliments is going to leave you drowning. 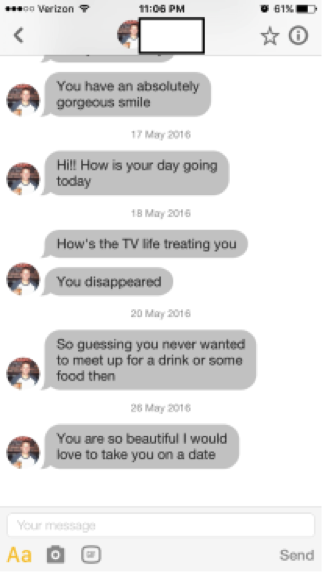 Now you are just embarrassing yourself. Seriously, give it a rest.

Going on two weeks, move on. Example: As I was writing this piece, I received this message. Unlike Dory, sometimes you should just quit swimming. 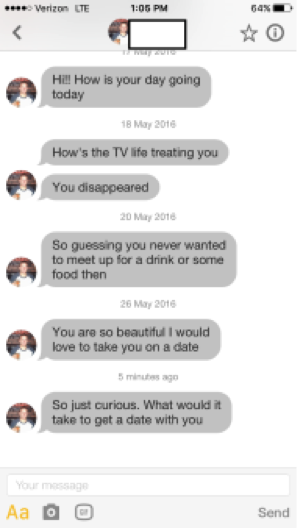 For the love of all that is mighty, do not mention your “wee willy winky” or a picture of your “sperminator.”

Fellas, I am going to tell you a little fun fact about women that you are going to hate – we actually do NOT like receiving pictures of your crotch cannon, clam digger, bushwhacker. Sorry I had to break it to you, but it has ALWAYS been that way. There is literally nothing appealing about looking at one, so why would you like to violate our phone that way? Especially with someone you have never met! Example: Didn’t even make it an hour without him wanting to whip out his trophy. 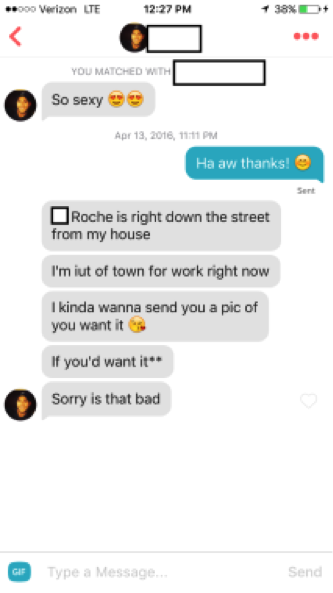 Again, KNOCK IT OFF WITH THE PENIS. Never met you, put that thing away!

Listen, I wasn’t kidding when I said this, NO WOMAN WANTS TO SEE A PICTURE OF YOUR BED SNAKE, SEX PISTOL, GIVING TREE! I don’t care what you call it, no stranger wants to see it! Example: I’m sorry, I just can’t. 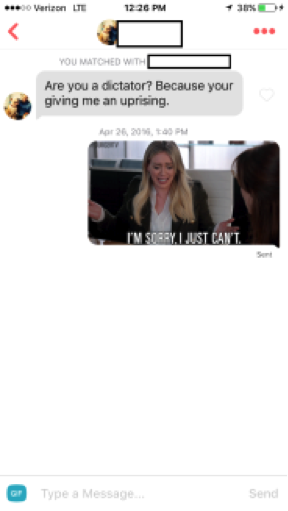 And finally, if a girl thinks you are worthy of having her phone number, don’t make her regret it.

Example: It takes A LOT for me to give out my phone number. Clearly my judgement was wrong on this one. FYI – We have never met and it will continue to stay that way. 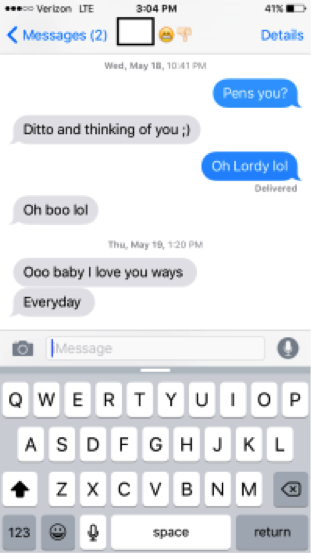 If you are seriously looking for someone on one of these apps or in general, use your brain and think before you do anything. There is no need to complicate things by over-thinking, over-reaching and trying to use your penis. Just try to be yourself, have fun, and keep it in your pants.