Report This Article
What is the issue?
Being a girl is awesome. It means lipstick and cute clothes and the evergreen excuse of “I’m PMSing.” However, it also can sometimes mean that society expects you to act a certain way: to laugh at certain jokes, to not laugh at others, and to carry about you an air of demure reservation. For the funnier lot of us — the ones who laugh at fart jokes, cuss like sailors, and are easily entertained by disgusting subject matters — it can be incredibly frustrating trying to fit that mold.

1. It can be a bit harder to make friends.

With girls, that is. It’s hard enough as a female to befriend other females since, let’s face it, we’re pretty much all catty/jealous/bitchy by nature. We can’t help it (well, we can, but we choose not to most days)! So, when you’re a girl who has a foul mouth and mind that’s usually found in or around gutters, making close friends can be trying. We’re a rare breed, us like-minded humorists, and to find one of our own is tricky. A lot of females will scoff at the sentences that come out of your mouth and sit in shock as you throw words like “c*ck” and “f*ck” around as carelessly as if you were saying “puppy.” You have to weed through a lot of goody two-shoes and sticks up butts to find girls who won’t only laugh with you, they’ll make you laugh, too. The closest friends I have I cherish most since we can laugh at and discuss our disgusting bathroom scenarios, horrifically graphic sexcapades, and often call each other to attention with terms of endearment like “dude” or “man.” In fact, one of my best friends was a non-cusser when I met her who rarely spoke of weird body ailments or potty humor. Now? The girl regularly swears in our conversations, which subsequently makes most of our time together funnier. I didn’t force her to do it – she converted all her own.

2. Switching your humor “off” is next to impossible.

I remember that, by the age of seven, I was laughing with the boys in class when a teacher would use the words “do” and “it” next to one another. “Okay, class! Let’s do it!” I would be the one girl erupting in giggles with all the other peckers in the room. Having a “dirty” and “crass” sense of humor is something innate, something you can’t just turn off. You can fake it, sure. And you’ll have to. But, if anyone thinks that “That’s what he/she said” jokes are getting by you, they couldn’t be more wrong; you’ve just gotten really good at internalizing your reactions. Having worked in several office environments since graduating college, my sense of humor in the workplace has had to take a backseat in many instances, but that doesn’t mean it’s still not there. And that also doesn’t mean it’s gotten any easier to suffocate. Wanting more than anything to text a friend a stealth picture of the dude giving a presentation’s weiner-outline in his pleated pants is a daily struggle for girls like us. And we can’t count the number of times we’ve taken an obnoxious “taking a shit/toilet selfie” to send to our friends and completely forgot to turn our sound off, so everyone in the bathroom heard the SNAP of our smart phone camera. Finding ways to stay true to your humor in a professional environment is ROUGH.

“Do I treat her like a dude bro or just like a hilariously funny girl?” is what I imagine a lot of dudes’ internal debate is when they come face-to-face with one of our kind. It’s a valid query, too. Because, you see, the hilarious side of girls like us yearn to be treated like “one of the guys.” We’re offended if you think you have to play nice around us or if we are left out of hilarious group messages with horrible stuff being said. We want in! But, the inarguably girly side of us (you know, the one that actually recognizes we have exquisite breasts and a working vagina) want to be treated respectfully, like a lady. I know – it’s not cool. We’re sending you completely mixed signals and snapping at you for saying something horrifically crass when we were just cracking up about the same subject the other week. Thusly why I labeled this section “Boys won’t know what to do with you.” Men might. But even then, there’s no guarantee. When you’re #blessed with a strong sense of crass, “say whatever I want” type of humor, lines are always going to be fine and they’re always going to be crossed when it comes to you and guys. It’s an everyday exercise to check yourself and not be a complete hypocrite if you’re not in the mood for the vulgar humor that your guy is dishing out. You’ve let him know it’s usually okay, so now you have to deal with it. It’s a slippery slope (much like that of a penis).

4. The better your mood, the crasser your humor.

If you’re uncharacteristically hyper or maybe have had a few too many libations, your mouth won’t only move faster, it’ll get a lot louder. You define a great time by how hilarious you and everyone around you is being, which means crassness to the extreme. Sometimes, for no reason, you’ll scream about “mah titties!” or “fuckity fuck fuck!” and, to you, it’s HYSTERICAL. It’s hard enough as it is to keep a cap on all the inappropriate thoughts that go through your brain, so when you add extreme happiness or alcohol (or both) to the mix, all bets are off. So are all boundaries.

Let’s face it: people talk a big game, but are easily frightened and turned off by unfamiliar territory. If you walk up to the club like “WHAT UP! I’M FUCKING HERE, Y’ALL! IMMA BOUNCE MY TITTIES AND GET ALL THE WAY TURNT. TO 11!”, some will think you’re hilarious and others will think you’re terrible – that’s life. When your humor is off-center and full of colorful vocabulary, half (maybe more than half) the people you encounter are going to grimace and run for the hills. They won’t get it or you or anything you’re about – and hey. That’s ok. Can’t win them all, right? Sometimes it helps to put yourself in their shoes, and tally how many times you refer to a male sex organ throughout the day. If you were them, wouldn’t you be confused? Nah. You wouldn’t. You’d think you were hilarious, so I guess this tip is useless (that’s what she said). But, when someone does appreciate your unconventional humor, texts like this make it all worthwhile: 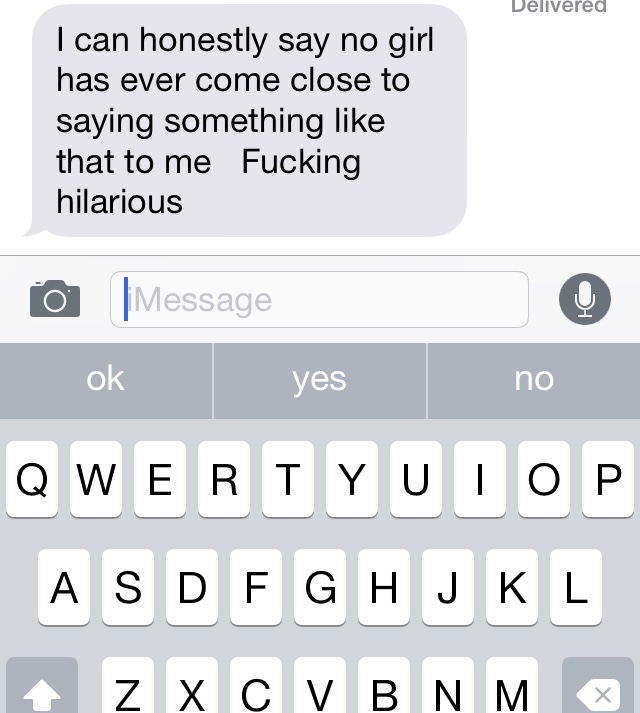 featured image – Jesus Is Magic
Read this: To The Funny Girls
Read this: You Don’t Want To Date A Funny Girl
Read this: No One Will Love A Loud Girl
Comedian Comedy Funny Girls Humor Life Sarcasm

Women Have To Stop Tearing One Another Down

This Is Why It’s Difficult For Men To Be Faithful

Just Date Someone Who Makes You Laugh