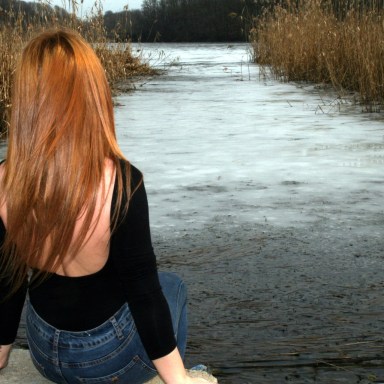 By Claire Windsor Updated June 3, 2022
Tara Holleman
Kathryn Watson is what a large community of women would call an “Endo Warrior.” While the term may not ring a bell to most, the chronic illness it refers to, endometriosis, is actually something that millions of women worldwide deal with every single day. In order to educate more and more people about this chronic illness, and to help spread awareness surrounding it’s often misunderstood, and misdiagnosed, symptoms — we sat down with Kathryn to further add to a conversation we started surrounding endometriosis , because in this case, when dealing with a chronic illness that is often discounted, or ignored, we believe that knowledge truly is power.

What exactly is Endometriosis and when did you first find out about it?

Kathryn Watson: Endometriosis is a disease in which tissue that normally grows inside the uterus lies outside of the uterus, and attaches to all different organs. In a healthy body when a woman goes through her period, that tissue that lines their uterus goes into their body and is discarded. However, with someone who suffers from endometriosis, that tissue sheds itself, but has nowhere to go. So, it is then reabsorbed into the body. Over a period of time, that tissue tends to get very sticky. It can even start to stick to your organs, which causes them to fuse together.

I discovered that I potentially had endometriosis through a friend of mine, Anna. She was so vulnerable with her story, and was kind enough to share it with her audience. I solely believe that if she hadn’t talked about it I still wouldn’t know what was wrong with me, and I am so thankful for that because it’s very easy to ignore a lot of the symptoms. A lot of times, women go years without realizing that something is wrong, or that their experience is out of the ordinary. Having educators who have the capacity to speak into that changed my world.

What were the symptoms that caused you to question what you were experiencing? What has your journey been like?

Kathryn Watson: I had my first period when I was 15 years old. From the moment it started every single month was debilitating. I missed a lot of school, and I often had to call into work sick. There were so many nights where I cried myself to sleep, wondering if I should go to the ER. For a few years, outside of the week surrounding my period, I was fine. During that week, I would always experience a lot of pain. Last year during the summer, however, I was at an event and I wasn’t on my period, but I had the most excruciating pain I have ever experienced in my abdomen. I tried to wait it out like I normally do but when the pain wouldn’t go away I went to the ER for the first time. The doctors there thought that it was an ovarian cyst, and they gave me some pain meds, sent me home, and told me that it would take up to 6 weeks to recover.

I basically never recovered — I have been in chronic pain since that moment, and as time progresses I am adopting more symptoms. I have chronic nausea and vomiting, I have leg weakness, hand weakness, my hair is falling out, I experience hot flashes, mood swings — so much stuff is piling on.

A lot of people say that when they went to a doctor, they were told told that their symptoms probably weren’t anything to worry about. Did you have an experience like that?

Kathryn Watson: It took me a long time to find a doctor that was willing to listen. I went to a handful of doctors and before I could even fully tell them what was going on they were already telling me what the issue was and what I had to do next. I had every test run on me, every ultrasound, every CT, and of course they all came back fine. We know now that the only way to diagnose endo is through surgery, so it was a really long disheartening process. It took a lot of strength to get to a point where I found out what was wrong with me. After about 8 months or so of visiting doctors that didn’t take me seriously, I found one that was willing to listen. By the time I sat down with her, she could tell how tired I was, and how over it I was. I went over what I had been dealing with for the past year, and she said “Whatever it is that you are wanting to do — I am willing to do that for you.” I asked for a surgery, and shortly after I was diagnosed.

Thought Catalog: What treatments have you tried or are currently trying? What helped? What didn’t help? Is there a cure for endo?

Kathryn Watson: For the most part, there is still very little knowledge around endometriosis as a whole, and even less surrounding cures. There are a lot of misconceptions relative to endo, though. A lot of people believe that pregnancy will cure them, or hysterectomies — which tend to be the most suggested “cure.” However, I know a lot of women who have gone through a hysterectomy thinking that it would cure them, only to come out experiencing chronic symptoms and on top of it they no longer have reproductive organs. It has been traumatizing a lot of women. Obviously, if the endo is localized and is just focused around your reproductive organs, then that surgery does help. However, a lot of the time the endo has spread, and when that occurs, the surgery doesn’t cure the pain.

On the other hand, as far as treatment options go, there aren’t a lot for endometriosis. The number one thing that they will tell you is to get on some sort of birth control. Over the past year I have been on about 5 different birth controls, and that hasn’t helped. It is meant to mask the symptoms, but in my own personal experience I haven’t noticed any relief. On the other hand, the most helpful thing for me is just — staying in bed. The more energy I can conserve, and the less movement I can participate in, the better. Pain still comes with that, and even on the days where I have to go out I’ll use a heating pad. There are heating pads that wrap around your abdomen that are air activated. As soon as you open them you can use them for up to 16 hours and strap them around your body. Those have become the only things I’ll wear out of the house.

And on that note, I know that especially before I had a diagnosis, I always felt guilty for staying in bed and for saying no to hanging out with friends, or going to the mall, or doing anything that was physically demanding. I’m still working on it. It’s so hard to put your foot down, especially regarding events you actually want to go to when you have to tell yourself “No, I want to go, but I know this isn’t good for my body. Maybe once I feel better I can try again.” Being gentle with yourself and your body is so important.

If there is someone who is dealing with chronic pain, what are some words of wisdom, or some encouragement, you would give them?

Kathryn Watson: Listen to your body. As women especially, we are constantly feeling the pressure to look perfect and to act put together, and to not show any signs of weakness. I think that learning to listen to your body, and knowing your boundaries and knowing when to take a step back and rest even if you don’t want to is so important. Putting your foot down and taking a break is so important.

What are some resources you would recommend for those who have been diagnosed with, or think they have, endo?

Kathryn Watson: I’ve recently discovered reddit, and what an incredible community that is. There is an endometriosis tag, and an endo tag, and I am included in both of those, and that has been one of the best support systems for me. Reddit has also been an incredible source of knowledge and education for me. It’s so easy, as someone who lives with the illness, to think that you know everything there is to know about it. And that is not the case. So I suggest researching as much as you can.

There is also a Facebook page called Nancy’s Nook that is dedicated to connecting women with endo, or women who think they have endo, with doctors that are specially trained to deal with endo. I know a lot of the time women go to doctors that aren’t educated on endo, and they get misdiagnosed or they get a lot of unnecessary surgeries, and bad treatment plans, and it ends up doing more harm than good. Nancy’s Nook is dedicated to stopping that, and to bringing women the correct resources.

Last but not least, just know that you aren’t alone, and that your feelings are valid. When you’re having everyone around you and every single medical professional telling you that you’re fine and healthy — it’s so discouraging. So to those of you who feel like something is wrong, or you don’t know where to look, or everyone around you is telling you that you’re fine, just know that you know your body better than anyone else. Chances are, even if you have a thought in your head that you could relate to this, that’s 100% worth looking into. You might feel brushed off, you might feel minimized, but your body will thank you when you have a diagnosis and a treatment plan that works. Listen to yourself, use all the resources you can find, and keep fighting.

How Chronic Pain Changed My Life For The Better