In Florida this week, a 14-year-old boy, Aiden Fucci, was arrested for the murder of his 13-year-old classmate. If the ages of the murderer and victim in this case aren’t chilling enough, what adds an extra layer of horror to this murder is the boy’s behavior after he was caught. From the back of the squad car, he uploaded a selfie to Snapchat asking his friends “Hey guys inbody seen Tristyn lately?” 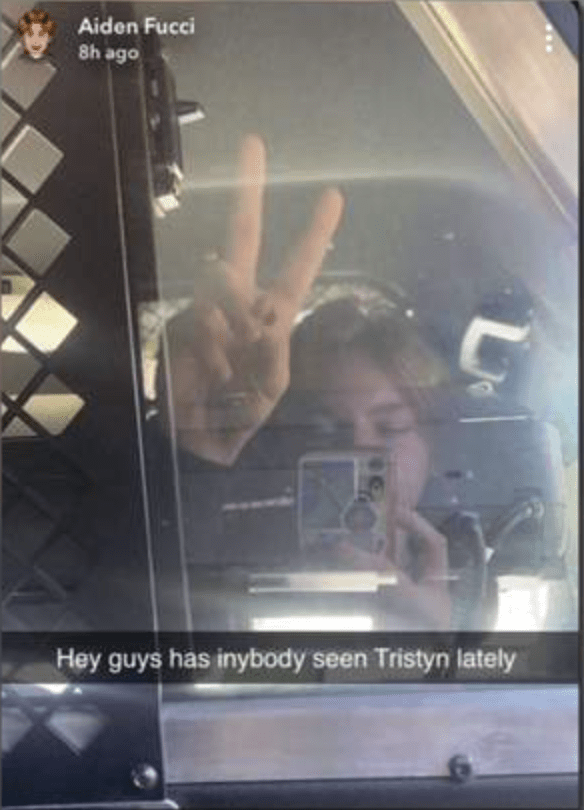 The “Tristyn” he’s referring to is Tristyn Bailey a 13-year-old girl who was a cheerleader at his school. She was found stabbed to death in the woods near his home earlier this week. Aiden Fucci was arrested and has been charged with second-degree murder for Tristyn’s death.

Tristyn Bailey went missing around 10am Sunday. At 1:45pm Sunday, a security camera showed Tristyn and Aiden walking together. Police found other evidence at his home that linked Aiden to the murder. His detention hearing this morning was broadcast on Facebook Live.

What I want to talk about is how a 14-year-old gets so radicalized into misogyny that he murders a 13-year-old girl and then brags about it while in the back of a squad car. Young boys are being groomed online by propaganda that tells them women are to blame for modern problems men face (most of which are actually caused by the same unhealthy expectations of masculinity that this propaganda pushes). Today, one in three men agree with the statement “women’s rights have gone too far.” This propaganda is so normalized, it is often indistinguishable from other memes or content online. For instance, men on TikTok joked about a “National Rape Day” coming for women on April 24. While the original video was quickly taken down, thousands of people had already seen it and the “joke” threats continued to be brought up in the comments section of almost every TikTok where feminism was mentioned. Studies have shown that this kind of misogyny is a “gateway drug” for terrorism. Anders Breivik, for instance, who murdered 77 people, mostly children, in a 2011 terrorist attack on Norway, was first radicalized into misogyny, then against muslims, and finally against the Norwegian children he murdered.

Some people are pushing to identify this kind of grooming and subsequent threats of violence as it’s own form of terrorism:

“In any other case, where somebody goes out and attacks a specific demographic group with the intent of causing enormous harm and fear in that group because of radicalisation, because of the fact that they’ve been explicitly groomed to hate that group, we would describe it as a form of terrorism.”

The International Center for Counter-Terrorism at the Hague says:

“Within secular male supremacist communities, the motivation for terrorist attacks stem predominantly from two core misogynist beliefs: 1) the belief that men are entitled to sexual access to women, which misogynist “incels”—men who identify as “involuntarily celibate”—have used to justify mass violence as retribution for being denied sex; and 2) the belief that feminists are a malevolent force controlling society at the expense of men, a frame similar to anti-Semitic conspiracy theories regarding Jewish elites controlling the world.”

If the number of young boys being radicalized into misogyny seems very far away from terrorism, it might help to know that during the time period of the Afghanistan war, more American women died because their boyfriend or husband murdered them than American men died in the war. More women have been murdered by their boyfriends and husbands since the 9/11 terror attacks than total humans died in those attacks. Currently, being pregnant in America is a more dangerous job than being a cop. The mortality rate for being a cop is 14 per 100,000 workers. The mortality rate for pregnant women in America is 17.4 per 100,000 pregnancies. It is extremely important to know that if you take out women who are murdered by their boyfriend or husband, the rate in the U.S. goes down to a maternal mortality rate that is consistent with other developed nations (around 10 in 100,000, which would also make pregnancy less dangerous than being a police officer).

And that’s just privileged women and white women. It gets more dangerous as you go down the scale of who is more vulnerable in our society. For black women, the mortality rate is 37.1 per 100,000. That means pregnant black women are doing a job that is almost 3x more dangerous than being a police officer. 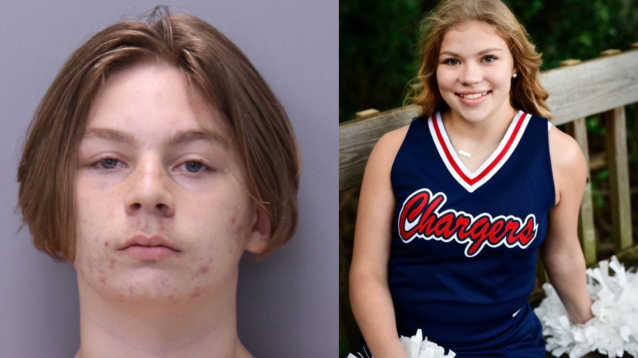 Aiden Fucci was crying in court when the judge charged him with second degree murder. While sometimes people are born who just seem “evil” and no amount of rehabilitation seems like it will work, that is often not the case and experts can tell the difference even when a skilled predator is lying about being victimized, as they often do. Most people who are studying the online radicalization of boys, like Dr. Jason Roose, do not think there is anything inherently wrong or evil about boys and men:

“It’s important to say that this is not about maligning or accusing teenage boys. Many of these boys are very, very vulnerable. And these online communities are extremely adept and clever at preying on them.”

One solution proposed by Dr. Roose is to call this online misogyny what it is: violent extremism. He says, “By doing so, you’re actually sending a really loud message that this will be taken seriously, and the resources of the state are going to be applied against people running these websites and hiding behind anonymity to make these comments online.

In 2018, three groups that track terrorism in the US added misogynistic groups to their watch lists. The Southern Poverty Law Center, the National Consortium for the Study of Terrorism and Responses to Terrorism and the Anti-Defamation League all started including misogyny in their research. The ADL made this statement about the change: “Every day, as virulent white supremacists make their hatred known, we immediately and rightly call them extremists. We have not been nearly as unequivocal in our condemnation when it comes to men who express violent anger toward and loathing for women.”

They also acknowledged that even thought leaders like The New York Times are getting our countries epidemic of mass shootings wrong:

“As recently as August 2019, the New York Times published an article titled “White Extremist Ideology Drives Many Deadly Shootings,” even though the comprehensive timeline of attacks included misogynist perpetrators of mass violence who were mixed race—all the perpetrators, however, were male.”

In short, something obvious is happening and we are not treating it as if it is obvious. Misogyny harms every person it touches. Aiden Fucci’s life is over because he was a vulnerable teen boy who was groomed by terrorists. Tristyn Bailey is dead. Her friends and family will never forget what Aiden did or how flippantly he treated Tristyn’s life. These aren’t mysterious unrelated acts of violence, they are symptoms of what is happening in our culture. They are preventable deaths, if we are willing to treat the cause.

SICK: 16 Of The Grisliest Babysitter Stories Ever

10 Killer Kids That Will Creep You The Eff Out