Four years ago two teen girls in Delphi, Indiana set off for a hike on a day they off from school and never made it home.

13-year-old Abby Williams and 14-year-old Libby German were dropped off at a wooded area near Deer Creek with plans to hike to the Monon High Bridge. They made it to the bridge and Libby posted photos of the girls at the bridge on her Snapchat account. Unfortunately, these were some of the last moments of Libby and Abby’s lives. When they failed to meet Libby’s father at their pick up spot, police became involved and the girls bodies were soon found in a small clearing a short hike from the Monon High Bridge. The cause of death for the girls has never been released.

This case has been so frustrating because of how cold the trail has been for years. While Libby heroically captured audio and visual of her killer, he has continued to hide in plain sight. Last month, an anonymous donor was able to increase the reward for information leading to the identification and conviction of this killer to $325,000. This is a lot of money for anyone, but it will go especially far in rural Indiana.

Now, a new person of interest in the case has finally been identified.

On April 19, 2021 42-year-old James Brian Chadwell II told a 9-year-old girl in his neighborhood that she could play with his dog. He used the ruse to abduct her and held her prisoner in his basement where he beat and sexually assaulted her. Police found the missing girl in Chadwell’s basement. When rescued, the girl said he was planning to kill her. Chadwell is currently charged with attempted murder, child molesting, attempted child molesting, kidnapping, criminal confinement, battery resulting in serious bodily injury and strangulation — all against the 9-year-old girl. He has a lengthy history of committing other violent crime.

The incident took place in Lafayette, Indiana, only 25 minutes from Delphi.

Carroll County Sheriff Tobe Leazenby said they are now looking into Chadwell for the Delphi murders. Chadwell lives near Delphi and looks like the man captured by Libby German on Snapchat: 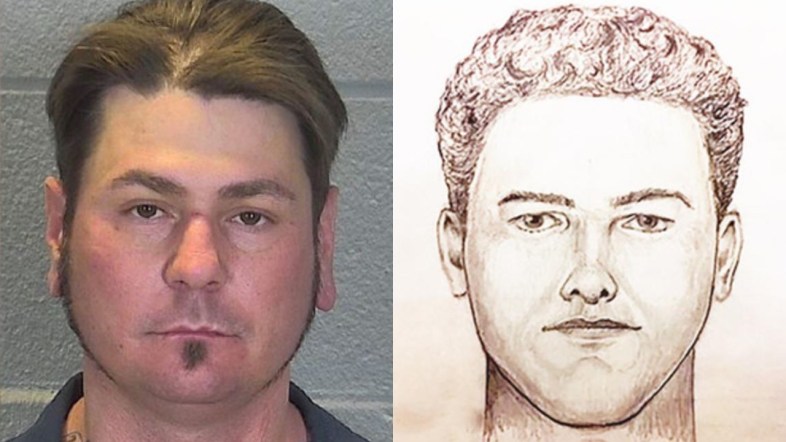 It’s also noted that on Chadwell’s Facebook page, he enjoys hiking and has many photos of other scenic bridges in the area. This means he would likely be familiar with the Monon High Bridge:

Some people have even noticed that Chadwell has a tattoo that resembles Libby German:

There’s just a plethora of yucky information about Chadwell online. His Facebook page is full of other gems like this rant:

“I was locked up for 13 1/2 years because I assaulted a prison guard and a cop. Never imagined it would be so difficult coming back out here. I’m a good guy, just made some mistakes. The world holds it against me.”

“Trump… You still have my vote.”

It probably won’t come as a surprise that he also makes misogynistic videos on TikTok:

In one of his videos he refers to “National Rape Day” which is a misogynistic TikTok meme. You can probably guess what it’s about based on the name. In the video that was made three days before he raped a 9-year-old girl, Chadwell says women don’t have to worry because “no one does that” and when men do rape, “we kill them”.

One day before he attacked his 9-year-old neighbor, Chadwell made a video saying “quit preying on the little people”.

Abby’s sister says she’s not getting her hopes up quite yet: “Imagine, if every time someone sent me a picture or a name of a person I got my hopes up thinking that could be him. I’d still be sitting here heartbroken but with no hope left and even more devastated.”

The ‘Down The Hill’ Killer Is Hiding In Plain Sight

Her Stepdad Told Police She ‘Ran Away’. 20 Years Later TikTok Solved Her Murder.