By Chrissy Stockton Updated October 20, 2020
For whatever reason I’ve always found dark jokes to be the funniest kind of humor. I think it’s the reminder of your own mortality that makes you more eager to accept the levity of a good joke. So, I searched Reddit collect a list of the best “sad laughs” or dark jokes I could find. Enjoy!

Can orphans eat at a family restaurant?

A woman visits the doctor as she has some abdominal pains and suspects she may be pregnant. After her examination, the doctor comes out to see her: “Well, I hope you like changing nappies/diapers”.

To which he responds: “No, you’ve got bowel cancer.”

3.
A man went into a library and asked for a book on how to commit suicide. The librarian said: “Fuck off, you won’t bring it back.”

4.
Why did the chicken cross the road? To get to the other side…
(suicide, for those that are slow)

5.
What do you call a blonde in the freezer?

Her parents named her Cindy so we should probably continue to call her that. She was supposed to graduate tomorrow.

(Told this to my epileptic dad. He was not amused. Sorry Dad) 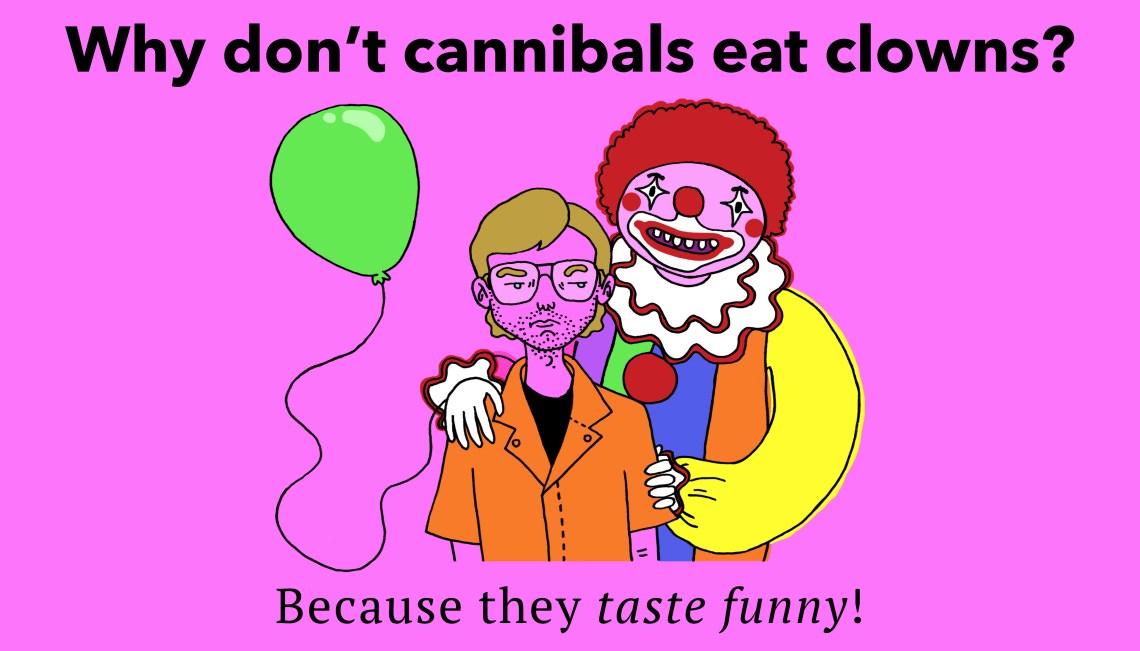 7.
So a guy is walking with a young boy into the woods.

Boy “hey mister its getting dark out and I’m scared”

Man “how do you think I feel, I have to walk back alone”

8.
Why was the leper hockey game cancelled?

There was a face off in the corner

Then she’d say “I can’t remember”… and start to cry.

11.
Why can’t orphans play baseball? They don’t know where home is.

12.
Where did Lucy go during the bombing?

13.
I once asked the crowd if they were pro guns and the majority belted out in approval. I asked a man in the front row why he was pro guns and he gave me the basic ‘personal protection liberty 2nd amendment’ hooplah. I very seriously told the crowd, “I’m pro guns because I enjoy living in a world with only 4 Nirvana albums.” My friend was the only one who laughed.

14.
What’s worse than finding a worm in your apple? The Holocaust.

16.
A guy sits at a bar in a skyscraper restaurant high above the city. He slams a shot of tequila, goes over to the window and jumps out.

The guy sitting next to him can’t believe what he just saw. He’s more surprised when, 10 minutes later, the same guy walks back into the bar and sits down next to him.

The astonished onlooker asks, “How did you do that? I just saw you jump out the window, and we’re hundreds of feet above the ground!”

The jumper responds by slurring, “Well, I don’t get it either. I slam a shot of tequila, and when I jump out the window, the tequila makes me slow down right before I hit the ground. Watch.” He takes a shot, goes to the window and jumps out.

The other guy runs to the window and watches as the guy falls to just above the sidewalk, slows down and lands softly on his feet. A few minutes later, the jumper walks back into the bar.

The other guy has to try it, too, so he orders a shot of tequila. He slams it and jumps out the window. As he reaches the bottom, he doesn’t slow down at all. SPLAT!

The first guy orders another shot of tequila. The bartender shakes his head. “You’re really an a**hole when you’re drunk, Superman.”

17.
Dyslexic man walks into a bra.

A: Because they taste funny!

20.
Woman delivers baby. Doctor takes the baby, and throws it, smashing around the hospital room, drop-kicking it, etc. Mother starts freaking out, being held back by nurses, begging “WHYYYY!!??”. Doctor holds baby upside down by the ankle and says “I’m just fucking with you, it was born dead”.

21.
After a long labour, a doctor approaches the new mother and says, “Ma’am, I’ve got some good news, and some bad news. What would you like?” After quickly thinking it over, she responds, “I’ll have the bad news first doctor”.

The doctor replies, “We’ll, I’m not sure how to put this, and I’m sorry to have to tell you, your child has red hair”.

Relieved, a smile spreads across the mother face. “Doctor, if that’s the bad news, what’s the good news”. The doctor replies, “He’s dead”.

22.
Why do orphans like playing tennis? Because it’s the only love they get.