Vani Hari is a food activist who goes by the moniker Food Babe. She passionately campaigns against toxins and chemicals in food. To date, she has campaigned against over 600 food products in four years, declaring them unsafe for consumption.

Hari has built a massive following of over a million fans, was named one of the Most Influential People on the Internet by Time, and wrote a New York Times Bestseller.

But over the course of Hari’s four years as Food Babe, numerous scientists and health experts have begun to question her. Their main complaints are that she has no specific expertise in food and that she amasses readership by making people unnecessarily afraid of “innocuous ingredients by pulling them out of context.”

Yesterday, Yvette d’Entremont, also known as Science Babe, published a scathing, 2,500 word takedown of Food Babe on Gawker. d’Entremont is “an analytical chemist with a background in forensics and toxicology…science writer, and public speaker” who runs scibabe.com. 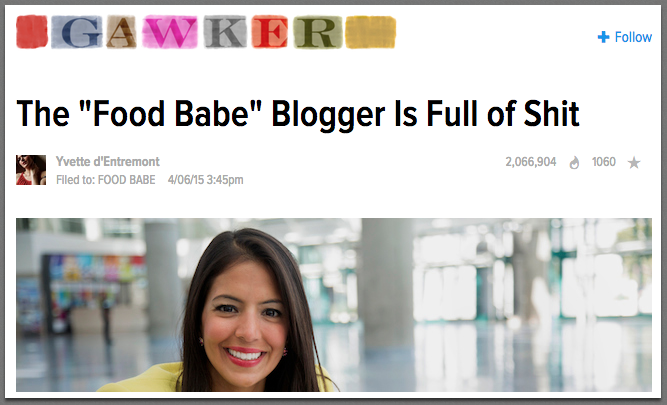 In the Gawker piece, Science Babe takes issue with Hari’s tendency to declare any difficult-to-pronounce ingredient a “toxin” or “poison.” One of Hari’s maxims is “If a third grader can’t pronounce it, don’t eat it.”

Instead, Science Babe’s rule is—”Don’t base your diet on the pronunciation skills of an eight-year-old.”

d’Entremont discusses one of Food Babe’s most infamous posts – a bizarre article about air travel, which Food Babe deleted from her site. It said that because “pilots control the airflow” in airplanes, they give themselves the best air in the cockpit. It also warned that sometimes, the air in airplanes can get up to 50% nitrogen (!)—but what she didn’t mention is that the air we breathe every day is 78% nitrogen! 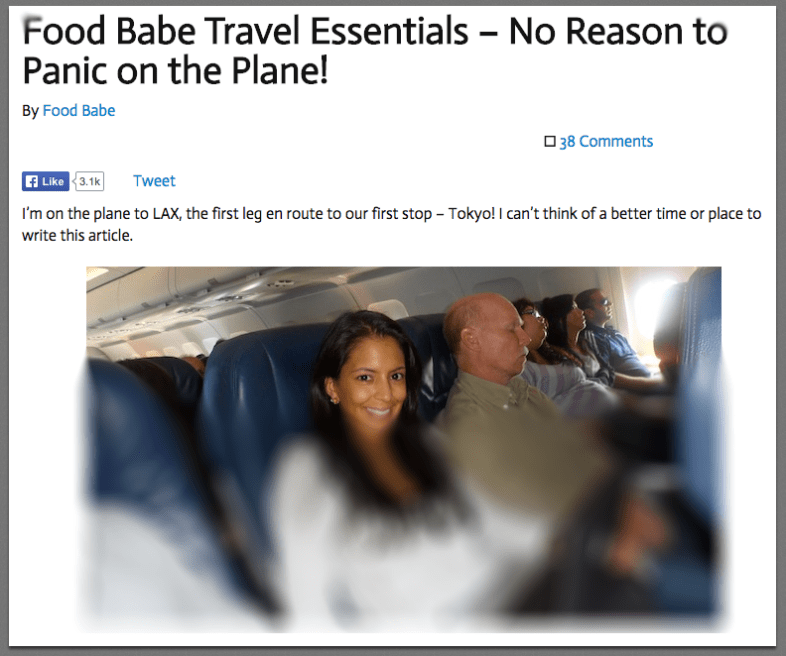 The Wikipedia article on the air we breathe gives the 78% figure in its fourth sentence.

Hari claims in the same article that airliners spray their passengers with pesticides before getting on the airplane. 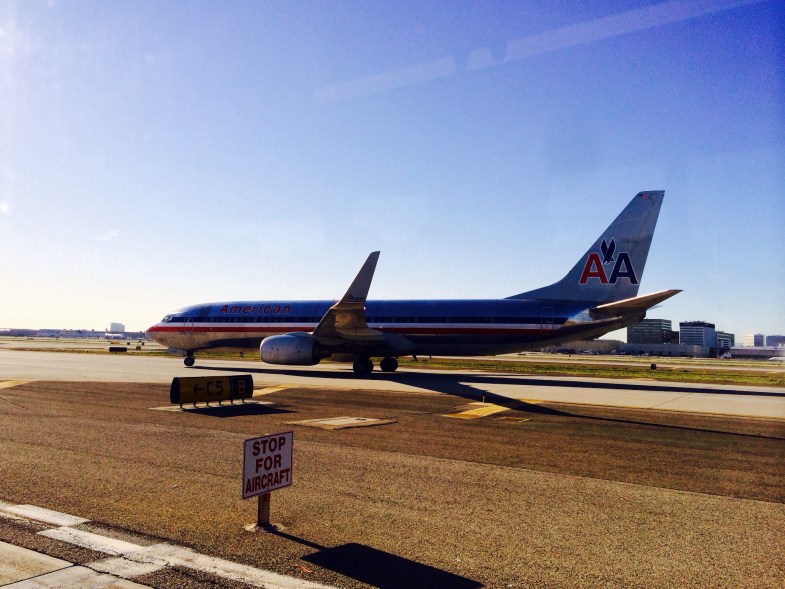 The Gawker piece also describes Hari’s campaign against the Starbucks Pumpkin Spice Latte, which condemned it for having a toxic dose of sugar at 50g per serving. At the same time, however, Food Babe was endorsing Suja—a juice product—to her readers on her website, which has 42g of sugar and comes with a warning that it is not suitable for diabetics.

d’Entremont also cites Hari encouraging readers to lie about having food allergies to the waitstaff at restaurants, which could diminish the seriousness with which waitstaff treat special food requests of customers who actually have allergies to food.

These issues, as well as many others, are just a few that have led numerous experts to speculate that Hari outright makes shit up with no scientific evidence for her claims. 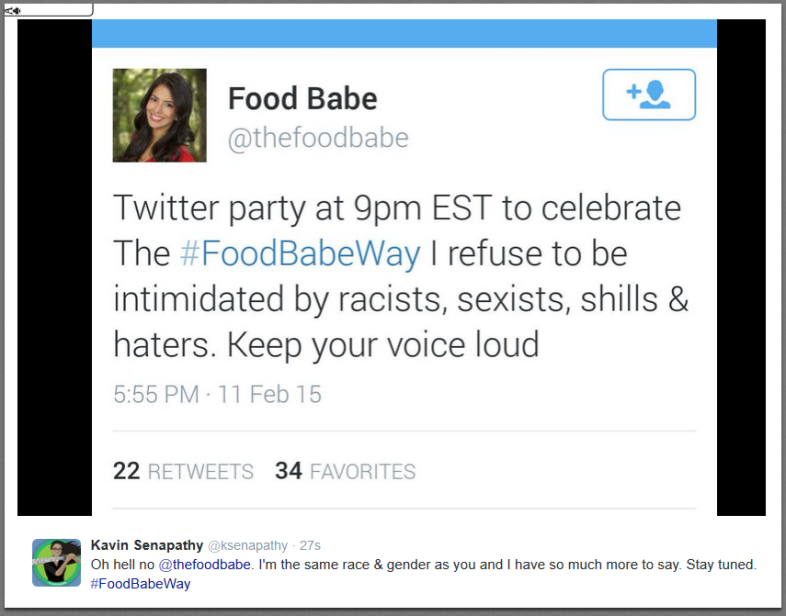 But Food Babe has a long history of responding to criticism by claiming her expert critics are racist, sexist, or are protecting the food industry. These experts include “the director for Science and Society at McGill University, a Yale-educated neurologist and contributor to the Skeptics Guide to the Universe podcast, and… the horticultural chair at the University of Florida.”

She also seems to banish anyone who disagrees with her. Readers have been banned from Hari’s Facebook page for simply asking for qualifications and “pointing out that water was a chemical.” The Facebook page Banned by Food Babe has over 7,000 members.

Meanwhile, Science Babe has already been getting death threats and threats of physical harm by Hari’s fans for writing the Gawker piece. 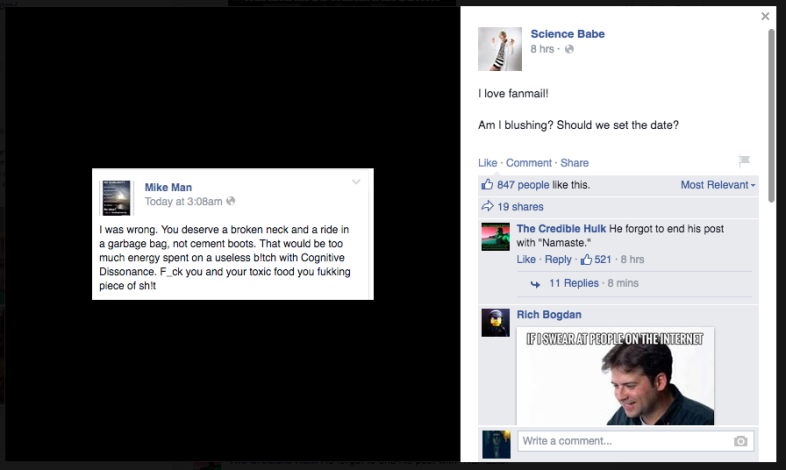 Food Babe has since responded to the Gawker article, writing in part that it “is another sign that the food and chemical companies are scared to death of consumer activism and will do anything to prevent the truth from coming out.”

Go read the case against Food Babe over at Gawker—and then check out her response.

Read this: What Do Women Really Think About Sex? 12 Brutally Honest Dispatches From A Woman
Read this: Here’s The Edward Snowden Interview With John Oliver That Everyone MUST Watch
Read this: 17 Dating Habits Of An Extremely Independent Woman