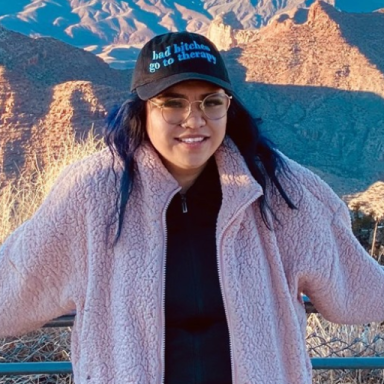 Love can make you do crazy things. For me, that meant skipping a four-month trip to South America, not moving to my dream city, and going to a festival with the love of my life who had just dumped me three weeks prior.

When we met in 2018, I was head over heels immediately. I never had someone want to spend so much time with me so quickly. But it came as fast as it went, and I was devastated. One month isn’t enough to fall in love with someone, but when we reconnected last August, it was all over for me.

Things were different—he even said so himself. They felt real this time.

After all, he told me he loved me first, he asked me to meet his parents on Thanksgiving, and he brought me into his life and made it ours. How could I not think this relationship was real, and that this love I’d been waiting two years for was finally coming into fruition?

It shouldn’t have surprised me when things came crashing down in the same exact way as they did in 2018. He started becoming distant, and I didn’t know what to do. I asked anyone who would listen for advice to make this work—my friends, my family, even Reddit.

When we didn’t work out in 2018, I knew that there was a lot I needed to work on: My self-esteem, my mental health issues, my communication. But I did all of that. After years of therapy and many relationships in between, I finally felt like I was stable enough to finally be the great partner I always knew I could be. I communicated well, I loved with all my heart and didn’t hold back, and I was actually finally ready for this.

However, just because I was ready didn’t mean he was. And just because someone invites you over during the holidays to meet the parents apparently doesn’t mean they want to commit.

So when he broke up with me after ghosting me for five days—and after I got us media passes to go to a music festival across the globe in Arizona—I was completely shocked.

I knew going to this festival was a bad idea. I was still madly in love with someone who didn’t want me, who didn’t treat me well throughout the relationship, and who named me for the only reason for the breakup, when all I did was put aside my own needs just to make him happy. But he had asked me to go to this festival with him in the first place—he had showed me all of this music, and he was the only person I wanted to experience this with.

We set boundaries from the beginning: Separate rooms, separate tents, and no hooking up with other people in front of each other. The breakup was just too fresh, and I knew I wouldn’t be able to handle it.

I don’t know if going to this festival was lowkey my last attempt to make him finally see me for who I really was: A girl who loved him and wanted to give him the world. Spoiler alert: It didn’t work, but we did it.

We ended up spending a week together in Arizona, and it was intense, to say the least. It went from screaming and crying matches in a Walmart parking lot to watching the sunset over the Grand Canyon. It was the worst form of emotional whiplash.

But when we finally got to the festival, it was almost as if we were both in our element, breathing in the music that brought us together in the first place.

I couldn’t help but cry every time I heard a song we would listen to together at 3 a.m. in his room, or when we would catch the set of an artist we’ve seen together back in Brooklyn. It was everything I ever wanted right in front of my eyes, and it didn’t want me back.

There was obvious tension between us, and even though we pretended to be “just friends,” it was too obvious that it was more than that. I mean, when two people love each other, it doesn’t just go away. But we kept our distance as much as we could, even through the silent stares and moments of longing.

On the last day of the festival, as we sat on the bleachers watching one of the last acts perform, he asked me, “Do you think hanging out like this is giving you closure?”

I sighed, trying not to get emotional, even though that never stopped me before. “I wouldn’t say closure,” I said. “But, I think it gave me what I needed. I mean, I can’t help the way I feel. It really hurts, but I’ll get over it.”

Saying I still love him would be putting it lightly. I think about him all the time and only want what’s best for him. I worry about all the personal issues he was going through when we were still in a relationship,and get sad every time I think about how I can’t be there to support him. I still even listen to all the songs that remind me of him, and the feelings haven’t faded one bit yet.

I pictured a future with him, and I don’t think I can turn in any direction and not see something that reminds me of him. I know I can’t control the past, the future, or his feelings, but I hope one day I can move past mine.

With that being said, love isn’t enough to make a relationship keep going. And it definitely won’t work if the effort put into the relationship is one-sided.

The amount of love I have for this guy ended up being boundary-less, toxic, and unhealthy. I had burned down standards I had set for myself and excused behavior that was absolutely inexcusable just because I wanted to build a life with him. I let him walk all over me because I thought that if I loved him this much, there was no way it couldn’t work out.

But at the end of the day, his uncommunicativeness, lack of empathy and understanding, and refusal to compromise would never allow us to work. I know that the breakup was a blessing in disguise so that I can finally put myself and my mental health first.

When you find that soulmate connection you feel so strongly and it hasn’t gone away since the second you met, it’s hard to let it go. But sometimes it’s for the best.

Regardless of how it ended, I’m so thankful to have met someone that allowed me to look at myself for who I am and finally learn to love myself. I don’t think I could’ve given someone this much if I was pouring from an empty cup, and because of him, I finally felt fulfilled.

I know that when I meet someone who really deserves it and wants to give it back, love is going to be better than I could have ever imagined it to be.