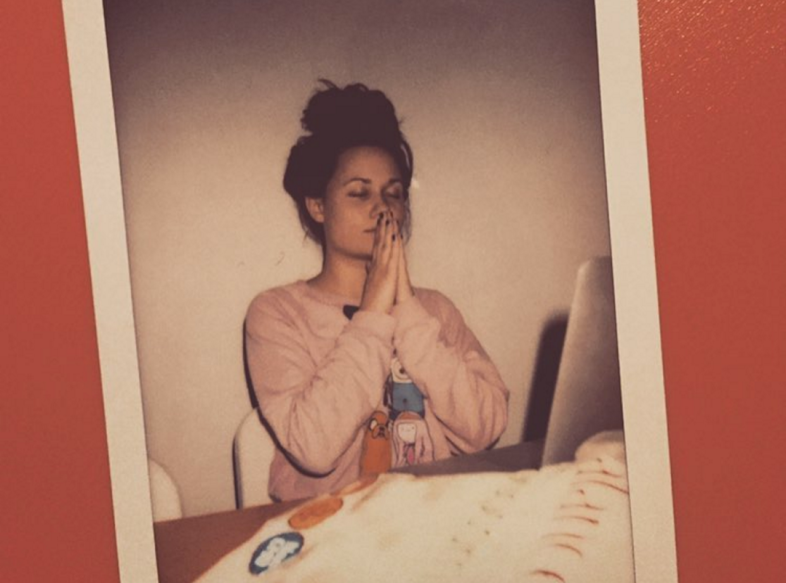 1. Not being able to love as purely as I did when I was a teenager.

We make fun of puppy love and naivety, but maybe the joke is on us? At 18, I wasn’t afraid to put my whole heart and energy into something – or someone. At 24, it’s exhausting to even agree to a first date.

I’ve become obsessed with my goddamn neck. Just the neck. I think crow’s feet are very charming. Same with smile lines. But I’ve started lathering my neck and chest with like 19 layers of moisturizer because I have this reoccurring nightmare that my skin becomes leather. Actual leather.

3. Not having enough money in my savings account compared to my friends.

Isn’t that gross? I’m legit freaked out that my friends have more and I’m somehow behind even though having a savings account isn’t something some people ever have. I’m generally not a jealous person, but money makes me feel like I must not be as capable as other people who have more of it.

4. Not being able to have a baby even though I’m unsure if I even want to have kids.

You always want what you can’t have? Or something?

5. My ex boyfriend getting married.

Not even getting married before me. Just getting married. Like, at all. AND we’ve been broken up for going on five years. Yikes. I can’t explain it, but the older I get the more I think about how he’s likely hitting that milestone soon. And it gives me acid reflux.

Yes, Internet. I am 24 and I live at home! I know this is becoming more of a norm because ~*~lolz millennials~*~, but still, it’s an insecurity. A privileged insecurity. I’ve been able to save a ton of money (but according to number 3, not enough!) and spend quality time with the most important people in my life. I could write you an entire essay on why living at home has been helpful and necessary, but I do have nightmares of being 40 and telling my mom I’m going out to a bar and to not wait up.

7. Not being taken seriously as a writer.

This is a new thing I’ve become weird about. Would I love to be published in The New Yorker? You bet. Am I still very drawn to writing articles urging reality TV stars to date me? Yes. Whatever. I’m complicated.

I can do all things through Calculator, who strengthens me.

My dad had it. That’s the extent of it.

10. Being too depressed to enjoy any of it.

This one isn’t irrational, just morbid. Living with a mental illness is hard and tiring and not at all romantic. I’m terrified that one day I’ll wake up and realize I wasted my youth being sad. But also, I don’t know how to stop it. Because it’s not an off/on switch. There’s no magical flashlight that can illuminate my path to happiness.

It’s not Forever Mid-To-Late Twenties. At some point, I’ve got to say goodbye to graphic T shirts, right?

I won’t do it. I have emetophobia and the idea of under-cooking something makes me ACTUALLY ill. Part of the reason I’m a pescatarian is because cooking meat (other than fish) freaks me out. I won’t do it. BUT WHAT IF SOMEONE ASKS ME TO THROW A DINNER PARTY AND I HAVE TO? WILL WE ALL DIE?

14. The barista never learning how to pronounce my name.

I’ve been coming here for a year, dude. It’s Ari. ARE–EE. IT’S NOT THAT HARD.

Again, I hate myself for this. I wish this wasn’t a fear or a focus. But alas, I look in the mirror before getting in the shower and ache for the high schooler who could do two crunches and have an eight pack. Thanks a lot, PIZZA.

This is a fear that for many lasts a lifetime. I don’t want that to be the case though. I beat myself up for turning 25 and not having a great budgeting system. I buy candles and prints from Etsy when I could just save it. I’ll treat myself to a fancy dinner and then just eat nuts and edamame the next day. Not a good system.

17. Not being asked for my ID when I buy alcohol.

Please. Just ask. Even if you think I’m old. For the love of God, just flatter me.

This is so dumb. This is so, so, so dumb. But when I see a 19 year old with 100k followers and people commenting “omg MOM” I’m like, cool what the hell would that make me? Grandma?

19. Being attracted to men who are damaged so I can “fix” them.

Maybe it was acceptable in high school, college even! But is there an age I should grow out of this? When does it just become embarrassing? When is it just a self-fulfilling prophecy? Now? Ugh.