Sick of my Netflix and Eat Way Too Many Microwavable Pizzas rut, I decided the only way I was ever going to start feeling better was by eating better. Shocking revelation, huh?

So, how was I going to start?

Suja (meaning long, beautiful life) is the fastest growing organic, cold-pressured and Non-GMO beverage company in the U.S. Having tried the juices before and knowing they actually taste good, I contacted them to inquire about their Fresh Start Program. The website states, “The Suja Classic Fresh Start is a great way to reset your body and reposition yourself for a healthy lifestyle.”

I had always been interested in juicing — if it really does any good or if it’s a sham. And after the holidays, yeah, this potato was in need of some repositioning.

The wonderful folks at Suja sent me a three day cleanse and I was so excited to share my experience with all of you.

Quick note: this post is NOT sponsored; I was sent the cleanse to try but all opinions are my own. Okay? Okay.

So let’s get into it.

Right away, I woke up with a headache. But I’m blaming that on the one glass of wine (that turned into two, then three) when technically you’re supposed to start eliminating things like alcohol, dairy, processed sugar, other general no-nos a few days before starting the program — so I wasn’t off to the best start.

They suggest a warm glass of water with lemon to ease your digestive system into being ready for the first juice. I did just that. This helped lessen my headache and I was feeling optimistic. I waited about an hour before starting my first juice. I know that breakfast is the most important meal of the day, BLAHBLAHBLAH, but I’ve never been one to enjoy eating first thing. Unless I’m super hungry, I have a hard time bringing myself to eat when I wake up. Drinking the juice ended up being the perfect solution for me. I was getting nutrients and calories, but didn’t feel like I was eating some heavy meal.

In the evening, I felt a little bit bored. Not bored with juicing or the taste, but bored because I felt like I should be eating. But not from necessity, from habit. It was a weird feeling to have and a reminder how often I would snack just…because.

My favorites ended up being Glow, Green Supreme, and Blue Dream. None of the juices in the program taste bad, but I definitely had a preference for these. So yummy. I seriously couldn’t believe how tasty Green Supreme was. *salivating right now remembering* 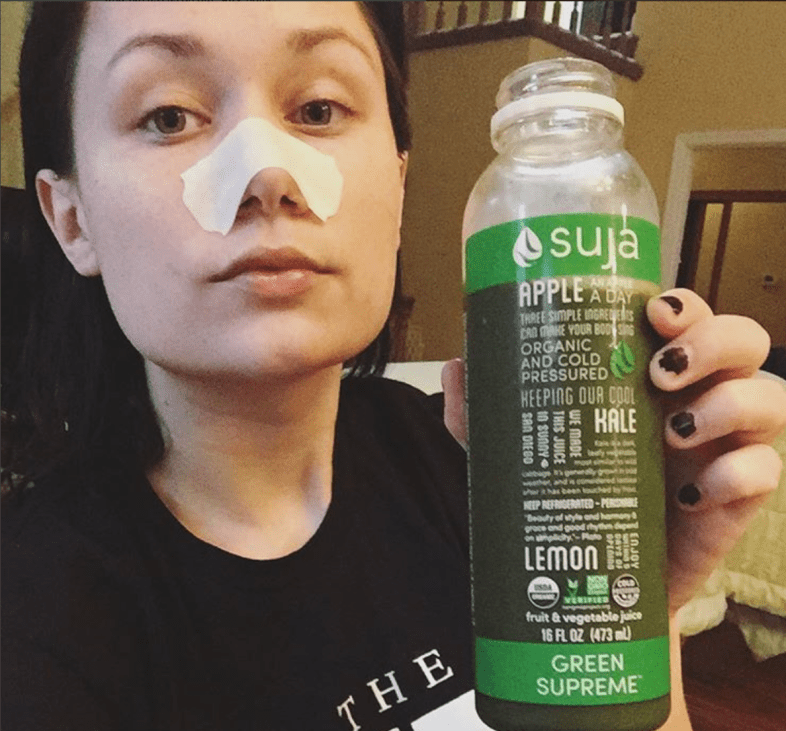 I felt fan-f*cking-tastic. Seriously. I’m a late sleeper with chronic insomnia, but I woke up…kind of early? Please note, early for me is 9:30. BUT STILL! I had energy the entire day. I didn’t want to do any serious workouts because you’re getting the lower end of the calorie spectrum (but still enough!). But I did go for a long walk and just felt so good. I had to pee a ton, but duh, drink that much juice and you’ll be urinating like a horse. No bloating. No stomach aches. And I wasn’t hungry. I had to occasional remind myself, “Okay, probably time for another juice!” So if you’re concerned you’ll feel like you’re starving yourself, you won’t. Because you’re not.

Woke up on the early side again. Again, a rarity for me. Something I found kind of amazing about the process is that I didn’t drink coffee, and I didn’t miss it? I’ve always considered myself slightly addicted to coffee. I drink it most days and my body seems to know when I skip it. I didn’t have any coffee for three days, but it didn’t feel noticeable. I have no idea if this was just coincidental. But for whatever reason, I was energetic, light, and best of all, wanted to make healthy choices.

I had a bit of a headache about halfway through the day, but had also not been super good at making sure I was continuously drinking the juices. I took a nap and the headache was gone when I woke up.

I wasn’t able to finish all of the juices (probably because I napped during the day so it sucked up some time), but shared with my little sister and she enjoyed the taste.

WOULD I DO IT AGAIN?

I think it’s important to remember this isn’t a program to lose weight. That’s not really what you should ever look to get out of juicing because it’s just not sustainable. I didn’t lose any, and that wasn’t my goal. But it did reduce my bloating and indigestion, something I’ve always struggled with.

I’ll be honest, I wasn’t sure I’d like doing this. The temperature of the juices (I did this during winter. I bet it would be insanely refreshing during summer) wasn’t the best thing with the weather and I did find myself fantasizing about a big ol’ bowl of soup when I finished the program. But all and all, I was happily surprised by just how much I liked the cleanse. Could it have been partly mental? Oh, sure. I’m sure there’s an element of a placebo effect. But I got what I wanted out of it — to feel better.

Some of us need a little boost to get started in the right direction. For me, Suja did the job.