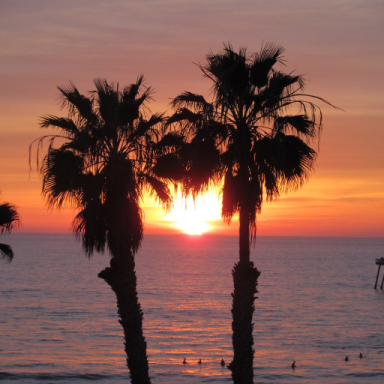 He was not supposed to exist. I had been telling my friends for years I did not believe in soulmates. The concept was too idealistic and unrealistic for the world I had seen. My parents wasted no time in my youth reminding me constantly that the romantic fairy tales of my Disney movies were only a fantasy.

Their parents each had their own marital secrets exposed relatively early in life. My mother’s father had what they called a “family over the fence,” something uncovered after he passed away from lung cancer when I was two years old. His wife would never acknowledge it happened, preferring to sing-song any mention of it like a toddler drowning out the noise to say they could not hear you. My father’s father met his wife while visiting her village during his time in the Navy. Even though he was already engaged to someone else, someone he had known since childhood, he pursued my grandmother. She at least had enough sense to tell him to his face that she would never be the other woman. My grandfather returned to his hometown, continued with his life until a month before the wedding, and then called it off for my grandmother. After he passed, we still speculated whether he ever regretted that decision. Except for my own parents, all my aunts and uncles divorced and remarried at least twice by the time I was in high school.

All that to say, I learned early and quickly that words and feelings could be fleeting. I was convinced from a young age that love was something that happened to other people in other worlds. If asked what my dream guy was like, I gave the most outlandish response I could think of: tall, redhead, British, made me laugh, could see through my defenses, and wished to travel the world with me and all the dogs and cats we could rescue. We would somehow be self-sufficient and get our money outside the confines of the 9-5 drudgery. He would be brave and encourage me to be adventurous and try new things, like eating scorpions and skydiving. I would be loving and loyal, showering affection and acting as the strong woman behind the curtain. It is and was a thoroughly obnoxious, childish fantasy until January 2013.

I did not notice him right away. I had been single for so long, I had my routine down—go to one of my three favorite bars once a week for dinner and the illusion of company. When I saw the open barstool, I knew I had to be quick to grab it.

“Is anyone sitting here?” I asked.

He turned and looked at me before answering in his Oxford accent, “No, feel free.”

I still had not glanced at him more than a second at this point. I recognized the bartender for the evening as one of my favorites. He came around the bar and gave me a hug before asking me what I wanted to drink. I followed up with asking how his wife was and if she could come out this evening to see him. Sometimes, she would come down and flirt with her husband at the bar as if they were strangers to encourage tips.

It was when the bartender started making my drink that the Oxford accent called to me again.

“Is that your boyfriend?” he asked.

I finally turn and look at him, nearly swallowing my tongue. A man, probably 6’2, with strawberry red hair and a neatly trimmed beard smiled at me. He was built like the swimmers I remembered training for the Olympics in college.

“No, actually, we actually all attend the same gym together,” I replied. I just try to come here when he’s working to have someone to talk to.”

He had the sexiest smirk on his face now as his hazel eyes brightened.

“Well, I’m glad to hear that,” he said. ”I found this place by accident. Just needed a quick bite before a flight this evening, but the menu looked decent…”

Just like every single cliche I had ever heard, the rest of our conversation flew by. I didn’t remember my drink being put in front of me. I didn’t remember ordering what I ordered. I was so enthralled and enchanted talking to him. His laugh was infectious. I found myself thrilled that I could make him laugh at all. We barely ate, as we were so caught up in each other, milking the moment given for all it was worth. I found myself giddy and shared things I had not told a soul in years. Before I knew it, he looked at his phone and practically fell out of the bar stool.

“Crap! I did not realize what time it was. I will be late for my flight, but this was fantastic!” He beamed at me and threw down his card to pay his bill. “Look, I live in New York City, but I’ve been flying out to Seattle each week for this project I’m working on. I’d love to take you out when I’m in town next week.”

“You mean a date?” I asked, almost in awe that I said that four-letter word after all these years.

“Of course,” he said with a smile.

I leaned over, said my phone number in his ear to try and imprint this moment in my mind with his scent. There was a part of me that wanted to ask him to just come home with me then, but my fears kicked in too quickly for me to consider it. I asked for his number in return, and once it was saved on my phone, he dashed out the door to get to the airport.

That night, I stared at the cell phone, both numb and elated with just a thought.

Please let this be real. Please be real.

Learned to ride a motorcycle at 30