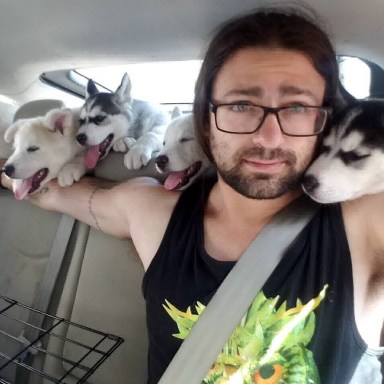 I’m that guy who will swerve across three lanes of traffic without hesitation because I spotted a sign for a garage sale. Doesn’t matter that I don’t need anything, doesn’t matter if there are three other people in my car with busy lives and no interest in digging through someone else’s trash. Garage sales are like magical dimensions where anything is possible and reality is only a suggestion.

Entire sofa for $50? No problem, they’re just happy for someone to get rid of it.

Grandpa’s medals from the war? Well, who is he trying to impress now?

The literal holy grail? Why not? It’s got to be somewhere. Some dude’s kids were probably eating cereal out of it.

I was immediately disappointed upon closer inspection. The first few entries were composed of big blocky letters like a child might write. A day at the pool, the stuff he learned in class, the new friend he met at the park… I was quickly losing interest and was about to return the notebook when I realized I recognized the person he was talking about.

Devin was my best friend in third grade. We used to build pillow forts in his parent’s house —

And there it was. The next entry talking about the fort. About the secret passage we made in the back so his cat could still visit when the door was closed. It’s been years and years since I last thought about that. But how did these people get my diary? I wasn’t even in the same state that I grew up in anymore. I watched the homeowner suspiciously while he bartered over an old TV. Clean face, slightly balding, broad smile — nothing out of the ordinary. I considered asking him about it, but decided it was too personal to explain.

I slipped the notebook into my pocket and stood to leave. It couldn’t have been stealing if it belonged to me, right? As I headed for my car parked on the street, I heard him call after me:

“Couldn’t find anything you liked?”

I gave my best straight face and shook my head. “Plenty I liked. Nothing I need.”

“It’s hard to tell what we’re going to need… until we need it. Take care now.”

I was gone without looking back. Too impatient to drive all the way home, I stopped in a coffee shop around the corner to continue pursuing this bizarre discovery.

Flipping through the book, I noticed the handwriting slowly refine as it progressed until it identically matched my own. This wasn’t just a childhood relic: the entries spanned over the course of years. It seemed impossible that I could have kept this for so long without any memory of it. There was no denying it was mine though, complete with my fleeting obsession with a girl in one of my college classes. I was too shy to talk to her, so I’d just sit in the row behind and daydream the hour away. She dropped out a few weeks later and I missed my chance of ever saying hello. I was so embarrassed by my ineptitude that I never breathed a word about her to anyone. And yet here she was, immortalized on paper in my own hand.

So why didn’t I remember writing it?

The farther I got through the book, the more unsettling that question became. The writing became sloppier as though rushed. Entries became short and far between, just a few lines per month. I could still recognize the events of my past, but the language became darker than I was expecting.

I should just kill her. Necks break as easily as hearts, maybe easier. She didn’t love me, she can’t love anyone but herself. I’d spare the next sucker she decides to fuck a lot of pain if I just killed her now.

That was written about my ex-fiance, only a few months ago. The breakup was stressful for both of us, but we’d parted on good terms. Sure there was some lingering resentment and disappointment, and I’d had some pretty nasty thoughts about her, but I’d never considered something like that. My diary said otherwise.

She gets home late on Tuesdays and Thursdays, it read. 10:30 PM at the bus stop. She has two blocks to walk, and there won’t be any people around. All I’ve got to do is take her purse and it will look like a mugging gone bad. No one will ever know.

The next few pages were hard to read. I kept glancing over my shoulder in paranoia as though someone in the coffee shop would read over my shoulder and call the police. I moved to a corner table which had opened up and continued reading.

It was even easier than expected. She didn’t look up from her phone, even when I was right behind her. One hand under the jaw, the other on the top of her head. One quick motion — I can still hear the splintering crack, like stomping on dry wood except for the wet, sucking sound of separated vertebrae.

I stopped reading and looked away. For a second I thought I remembered what that sounded like, but it might have just been the power of suggestion. I pulled out my phone to text her and make sure she was okay but changed my mind at the absurdity of it. I flipped ahead to the last page containing writing. It was dated yesterday.

It was supposed to be easier this way. I thought killing her would be the end, but I’m thinking about her more than ever. Every face is her reflection, every smile a sneer, every voice heavy with accusation. I think I’m going to go insane if I can’t get her out of my head. I want to forget. I need to forget. And yet if I do, how much of me will disappear with her?

Need to forget. The words rang a bell in my mind. As I was leaving the garage sale, the man had said it’s hard to tell what we’re going to need until we need it. It had to be a coincidence. Or maybe I just needed it to be. I scanned every page until the end of the notebook, but they were all blank.

I picked up my phone and called my ex. The ringing seemed to go on for an eternity, but it was only three repetitions before it connected. I asked if she was there, my voice catching in my throat.

There was crying on the other line, then a sniffled apology. I recognized the voice as her mother.

The call ended abruptly. The coffee shop suddenly felt much louder than it had a second ago. The sound of the cash register opening made me jump. People seemed to shout at one another across the room. I stumbled outside, and the traffic was a hurricane whirling around me. Then to my car, lurching onto the street with a chorus of horns shaking me to the bone. I didn’t slow down until I slammed to stop at the garage sale once more.

All the other prospective buyers had gone home. It was just the homeowner sitting in an old garden chair facing the street. He wasn’t reading or doing anything, just sitting there and waiting. He smiled as though expecting me when I got out of the car.

“Forget something?” he asked, his voice coy.

He only laughed. “Why not?”

“Because I’m a good person. We both are — were, whatever. It didn’t go like that.”

“How did it go then?” he asked, casually reaching under his chair. “Like this, maybe?”

He produced a small stack of notebooks, each a different color. He opened the red one seemingly at random and began to read:

“Love survives, love endures. There was once a time when we fought a lot, but in fighting, we learned more about each other than we ever did from the easy times. We showed each other our deepest insecurities and vulnerabilities — we gave the other the power to destroy us, and we loved each other for our mercy. I liked her because of her virtues, but I loved her because of her faults because I knew she trusted me enough not to hide from me.”

“What’s that supposed to be?” I asked. I’d been moving closer while he read until I was only a few feet away.

“You were working on your wedding vows. Don’t worry — it was just a first draft. Here, take it.” He handed me the red notebook.

I snatched it suspiciously as though the man taking me hostage had just offered his gun. I immediately flipped to the end and saw my handwriting with yesterday’s date once more.

Diapers — not that plastic crap.

“What the hell is this?”

“Things your wife wanted you to pick up on your way home. You’ll find her waiting for you if you go now. Or maybe you’d prefer the blue notebook. You never met her at all because you went back to finish your Ph.D. Is that what you want?”

My face must have betrayed my confusion because he laughed again. “A lot of folks think they can only affect their present because that’s all they see, but every second you’re alive you’re only making more past. Keep that in mind next time you make a decision — is this the past I want to live with someday?”

He offered his open hand to take the red notebook back, but I clutched it to my chest. I turned away without another word, gripping the notebook so tightly that the cover cut into my fingers. I was scared to think what might happen if I spent any more time here.

Besides, my wife was at home, and I wasn’t going to keep her waiting forever.