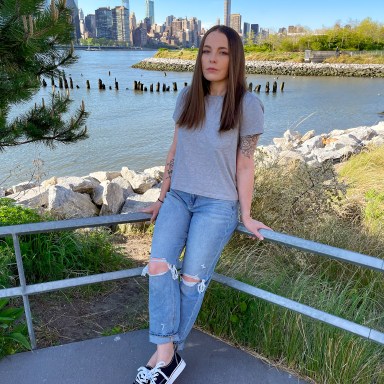 There are a lot of things that go through your mind when you’re first diagnosed with an incurable illness. How will this affect my day-to-day life? Will I have to take medication forever? Will I die? However, seldom do we stop to consider the impact our conditions will have on our feelings of self-worth and the complex relationship we form with our bodies.

Our pre-teen years are pivotal in our development of self confidence. We crave attention and acceptance, wanting nothing more than to fit in. However, imagine that in the midst of this emotional roller coaster, you receive the news that you have a disease and the responsibility of managing it dumped in your lap. It’s a traumatic experience, especially for a child, and when 8-year-old me was diagnosed with Crohn’s Disease I was not prepared for any of it.

I spent the next few years in denial. I didn’t like to talk about my illness, I was dismissive at appointments with my specialist, I refused to take my medication and I often ate things I wasn’t supposed to. It wasn’t until I noticed the behavior of the people around me shifting that reality began to sink in. I was caught in between my parents treating me as if I were made of glass and school faculty acting as though I was making the whole thing up. Rumors also started circulating amongst my peers. One got so out of hand that my parents had to get the school board involved. A girl in my class started a rumor that I had contracted a contagious disease, resulting in several students avoiding me. It was an incredibly embarrassing ordeal.

By the time I began my freshman year of high school I had grown fairly comfortable talking about my disease and had become more responsible with managing it. However, despite my best efforts, my health began to further deteriorate. I was constantly in pain, I wasn’t sleeping, I was barely eating and had lost a considerable amount of weight. Standing at 5 feet tall I weighed just slightly over 70 pounds. I was noticeably smaller than other children my age and it made me feel different and defective.

Within a month of beginning school I started developing new symptoms. Even though I was barely eating, I constantly felt full. My abdomen was hard and distended and I stopped having regular bowel movements. It was finally decided that I needed to take a trip to the ER. But instead of being met with kindness or concern, I was met with irritation and disinterest. I was a wrench thrown into their otherwise slow night. Tests were performed and they concluded that I was constipated. I was given an oral laxative and sent on my way.

The following Monday, I had an appointment to receive my monthly infusion and within minutes of them reviewing the ER visit my exam room filled with nurses, doctors, and a surgeon. That’s when they informed me that I had been living for weeks with a stricture and was completely obstructed. I was immediately admitted and talks of surgery began. I would need a partial bowel resection with the possible placement of a stoma/ostomy. I had never heard of an ostomy before but after it was explained to me I knew it was something I didn’t want. I pleaded with the surgeon, begging him to do everything in his power to prevent me from needing a stoma. So, a few weeks shy of my 14th birthday, I went under the knife for the first time. The first thing I did upon waking from surgery was feel my stomach. I can vividly remember the feeling of the soft, crinkly plastic underneath my fingertips. Signaling my brain that my worst fear came to fruition. I burst into tears and sobbed uncontrollably, I felt like my life was over.

There were a lot of things that happened during the remainder of my teen years. I found out that my ostomy, which was originally intended to be temporary, would become permanent. Old treatments failed, new treatments were started, and eventually more surgeries were performed. I was angry and depressed. Why me? Why couldn’t I be “normal” like everyone else? I regressed back into a state where I hid my illness from people, devastated every time someone found out about my situation.

My outlook on life started to shift in my twenties. I know it probably sounds weird to say social media changed my life, but it did. After spending years with no one to talk to about my experiences, I now had an entire community of people with Crohn’s, Colitis, and ostomies at my fingertips. With their encouragement and support I was finally able to begin repairing my damaged relationship with myself. The most significant moment for me was when I posted a picture of myself with my ostomy showing on social media. Something that I would never have done previously and in the moment I pressed “submit” the burden I had been carrying for years was lifted.

Looking back, I now know that none of the things I experienced were worthy of ridicule. I believe that had I received proper emotional support I may have been able to establish a healthier view of myself earlier in life.

Yes, I have Crohn’s Disease. Yes, I have a permanent ileostomy. But that doesn’t take away from my value as a person. If anything I think it’s helped me have more empathy and understanding of others.

If I could give one piece of advice to anyone struggling to cope with their illness it’s this. Find a community, be vulnerable and let others in. You can’t and shouldn’t do this alone.

A tiny lady living in NYC with her three cats, Crohn's Disease and a permanent ileostomy.