There is a nuanced and etching sadness the moment you realize that you’re not what others would consider conventionally attractive. I realized my body was shaped differently than other boys one summer afternoon in the aisles of a TJ Maxx with my mother.

As she swept through the aisles pulling down discounted bottles of designer anti-frizz shampoo and glancing at overstocked heels she could never wear, I asked her if I would be able to go look at some underwear for myself. Navigating through racks of faux fur coats and jumpers, I pushed past a family of four huddled around a sale rack of tank tops to the men’s underwear section. As soon as I reached for a four pack of Hanes – white, briefs – my hand began to shake and my heart threatened to burst out of my chest. I held my hand in the air for a few seconds, wondering if I were having a stroke when it began to occur to me that my eyes were laser-locked on the package the underwear model on my Hanes container was sporting.

Immediately I began to pace the underwear section, making sure to carefully pause at equal interims to stare at the sock section just to the left. In my mind, anyone passing would have just thought I was a very confused shopper, when in actuality it looked like I was cruising.

Eventually I steadied myself and walked directly in front of the underwear wall. There they were. All of my first boyfriends in a row. Each with perfectly coiffed hair, dimples that I wanted to kiss goodnight and abs I wanted to grate fresh mozzarel off of.

I scanned the rows and rows of underwear models and found the most beautiful one: A man with olive tan skin, dirty brown hair, and green eyes that challenged me to touch him. Holding him in my hand, I felt my athletic shorts rise and stiffen – I had to use the underwear pouch to hide myself as I stumbled back to my mother. I found her in the perfume aisle whispering softly to herself, “…if only I had somewhere to wear this.” Keeping the underwear glued to me long enough for my hard-on to go down and for her to usher me to the front of the store, I felt elated when the cashier placed them in a bag for us. My beautiful man was coming home with me. 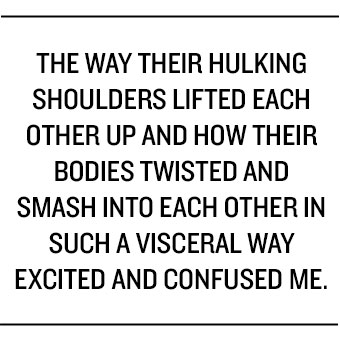 After the thunderous sounds of my father’s snores would reach my ears upstairs, I would boot up my PlayStation portable and log onto Sean Cody. Thumping my elbow against the wall as I went at myself I was transfixed by how sculpted their bodies where. The way their hulking shoulders lifted each other up and how their bodies twisted and smash into each other in such a visceral way excited and confused me.

After I would finish, I would walk to my mirror and stare at it for 30 minutes or so. If I turned my body to the right and sucked in my stomach until my face purpled, I almost looked like I could have abs hidden underneath years of baby fat and homemade carrot cake. If I dropped my voice to a gruff growl I could almost mimic their moans as they fucked on screen.

I was never considered a particularly attractive boy by anyone who had met me. Inheriting my mother’s thick hair it constantly appeared like I had a growth protruding from my scalp every time my hair grew past three inches. It was woolly and full and when my mother would cut it every two weeks she’d leave it in the garden for birds to build sturdy nests from.

The first time I kissed a girl she ran her fingers through it and a rough knot snagged her ring in what she would later tell her friends was my “dog fur.” I never knew when to stop eating chinese, or pizza, or ice cream, or second dinner and it never occurred to me that eating two bagels for breakfast wasn’t the best idea.

I was born chubby and it wasn’t until my growth spurt that I even began to consider how being thin meant people would treat you differently. The same summer I grew eight inches my grandmother took me out shopping for an entirely new set of clothes. “A strapping man like yourself needs pants that fit you,” she told me as she ran her credit card at the Macy’s check-out line.

High school was a particularly unique challenge for me because although I had grown in height, my face remained frozen in the past. I look back at my senior year photo and I see a boy with sea-foam green braces (at the time I thought they would look cool, in actuality they looked like I had shoveled spinach into my mouth right before the photo was taken), hair slicked back so it looks wet and the concealer I had begged my mother to put on me that did little to hide the acne that had colonized on my face.

When we’re young we rarely see ourselves clearly in the way we do as adults. We feel, at the time, that our faces are final and that we will never be as beautiful as we are in that moment. I would return home from college for the first time seven months after my senior year photo was taken as what many would consider “a new man.”

Sometimes seven months can feel overnight, and my transformation felt like it had happened while I was having night terrors. My braces came off, my face thinned out and my acne decided to stop being a complete dick-wad. A week into college my roommate advised me that only middle-schoolers and poor people used LA Looks, and I promptly poured my bottle of level 7 hold gel down the drain.

I felt like one of those children who were never able to drink in high school, so during college they become alcoholics. Except instead of just drinking I was after a different type of buzz. One that can only come from another person paying attention to you; a buzz that comes when someone feels a carnal urge just from looking at you and you alone.

The first time I began to wield my looks was when I flirted with a bartender and he gave me three free shots. He was around 5’4″ and looked like a fat Justin Timberlake. He said if he gave me the shots, I would have to kiss him. 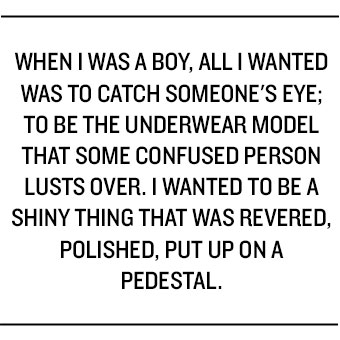 I did and ended up getting so drunk I passed out in the back of my friend’s car on the drive home.

I started getting free entry to clubs, free dinners, and free gifts from the men who seemed to like whatever I was exuding. Eventually it wasn’t enough for these men to just want me, I needed them to have me. The first time I slept with a stranger in college he fumbled to take off my shirt and his breath smelled like Jack Daniel’s.

While he scratched and grabbed at my back he called out “Tyler!” like he had loved me for years. We lay there in the dark for a few minutes after, the hum of my fan saving either of us from having to make conversation. I never asked him who Tyler was or his own name. I just liked the way he said Tyler like it was the only name he ever wanted to say again. Maybe Tyler had abs. Maybe he was a handsome man. For a night, being him didn’t seem so bad.

I began to notice that the men I was attracting had a certain appetite for youth. They ranged in age and build but one thing would remain the same: Their fascination with my beauty. In their eyes, I was never handsome, or hot, or studly. I was pretty, beautiful, gorgeous.

Being told I was a beautiful boy was like suddenly becoming a famous child star, but knowing that your moment in the spotlight was fading fast.

At first, these words showered over me and bathed me in a warmth I had never known rubbing my fat rolls together in the mirror as a child. But like all things that fill up empty voids inside of you, they began to trickle out of me faster than I could keep the well of compliments filled up.

There is a difference in being a beautiful boy and a handsome man. I discovered this when men would tell me as they dressed that they liked being with me; that sleeping with me felt like sleeping with a woman. I began to rub my stomach again in the mirror at night and pull at the cheeks on my face willing them to become more hollow and chiseled. Being told I was a beautiful boy was like suddenly becoming a famous child star, but knowing that your moment in the spotlight was fading fast.

There is nothing left for me anymore in the touch of a stranger and there is nothing left in the words that I used to desperately crave to hear. Now when people tell me I’m pretty it feels like a stab to the man I want to be. There is no difference in affection when it comes to being called gorgeous or being called handsome; and it has taken me a few years to understand why these seemingly interchangeable words have bothered me so much.

When I was a boy, all I wanted was to catch someone’s eye; to be the underwear model that some confused person lusts over. I wanted to be a shiny thing that was revered, polished, put up on a pedestal. But as soon as I got it I realized that there is nothing left in seeing yourself in a mirror and only wondering what others are looking at. I keep waiting for this knowledge to catch up to my actions. I keep waiting to stop waiting for compliments that will eventually stop coming.

There is a picture my parents keep above their fireplace of a four-year-old me standing, fully-clothed, in the toilet. My mother loves to tell the story of her son sneaking off every 20 minutes or so to climb into the toilet and flush himself down. Depending on when she tells the story, she had to change his clothes four times, sometimes seven. His hair is blonde and his cheeks look perpetually filled with helium, ballooning them in a cartoon way. He is four and he hasn’t heard of abs, or burgers, or how hollow a grab of his ass can feel. I look at this boy: wet, happy, and smiling, but I don’t recognize him anymore.

This post originally appeared at Human Parts and is from Shawn’s forthcoming collection “I Can Self-Destruct.”