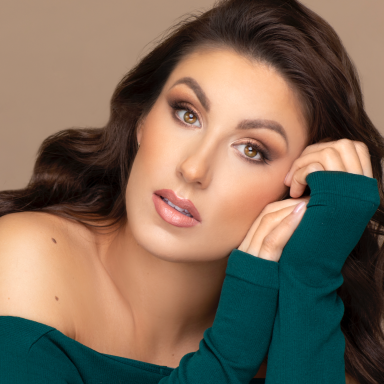 I remember frantically telling my first graders, “Hold on, Mrs. Campbell needs to turn her microphone and camera off really quick” and I couldn’t even make it to the bathroom. There, in my office, I threw up. I proceeded to vomit for the next twelve hours. Finally, around dinner time, I remember laying my head on the toilet, looking up at my husband and saying, “I can’t do this anymore, take me to the ER.”

After battling severe digestive issues for two years, spending six months of my life vomiting weekly, not being able to consume food, and losing over 35 pounds, I couldn’t go on. At 1:00 AM, I was rushed to the operating room to have a small bowel resection. After spending a very tough thirteen days in the hospital and having another emergency surgery, I was officially diagnosed with Crohn’s Disease. I remember sitting in my hospital room, staring at the TV. I could hear noises around me and knew people were talking but I just kept trying to wrap my ahead around the fact I had been diagnosed with a lifelong chronic illness for which there is no cure.

Shortly after being discharged from the hospital, I experienced post traumatic stress and severe food anxiety. I became terrified to eat as I feared I would get sick. I couldn’t look in bathrooms or my office because of all the trauma I endured there. I knew recovery was going to be difficult both, physically and mentally. My doctors and I decided I would stay on medical leave until January so I could fully recover.

One day, a director from the New Jersey International pageant system reached out to me and invited me to compete for the title of Mrs. New Jersey International. I have a long history of competing in pageantry and had been trying to win a state title for 21 years. I know what it takes to win a pageant and deep down, I knew there was no way I could do it, so I politely declined. I could barely look at myself in the mirror. Where there once was a sparkly belly button ring and a flat stomach, was now replaced with a large scar and smaller scars from the staples in my skin. I lost almost all of my hair, I couldn’t even put it in a pony tail and I truly looked like a skeleton. I knew there was no way I could win a pageant looking or feeling that way.

As the months went on, I worked hard to regain my strength. I began truly focusing on my health from the inside out. I knew I was in surgical remission but I also knew there was a reason I ended up in the hospital. I needed to truly take this time to focus on my physical and mental health. I began focusing on things I was truly thankful for and started writing them down in a gratitude journal. I began to get into a healthy routine and I started to feel stronger each and every day. I focused on weight training instead of intense cardio, getting enough sleep, making healthy food choices, cutting toxic people and things from my life, and set goals for myself weekly. Finally, January had arrived and I returned to teaching. I was finally feeling like myself again. It was a Saturday and once again, Mary reached out to me asking me to compete but for some reason, this time, as I was reading the message, I heard a voice inside my head say, “you need to do the pageant this year and share your story with others” From that moment on, I didn’t look back. Before I knew it, I was messaging Mary and had already sent the deposit to hold my spot for the competition.

In pageantry, you typically have a platform or cause you care deeply about. I knew not many people knew what Crohn’s and Colitis Disease was and I definitely knew nobody talked about it. I remembered how isolating it was to go through it and I promised myself I would become a voice for the IBD community. That is when I founded, IBD Heroes. A social media platform, where I share patient stories from all over the world. I wanted to give people in the IBD community, a place to share their stories to empower and connect with one another. I continued to work on featuring Crohn’s and Colitis patients and also hosted my own fundraiser for the Crohn’s and Colitis Foundation. It was clear this was now my mission in life, to raise awareness for this awful disease.

Finally, pageant weekend had arrived. In this particular system, 50% of your score is personal interview. I remember walking into the interview room and as I sat with each judge. I made sure they knew what my mission was, to be an advocate for the IBD community. I shared my story of what it was like being diagnosed with Crohn’s Disease, dealing with food anxiety, and feeling so isolated while going through it all.

It was the moment my family, friends, and I has been waiting for. I stood on stage looking out at the crowd and thought to myself how blessed I was to be there in the first place. No matter the outcome, I had put forth my best self and shared my story of my battle with Crohn’s Disease. I rocked my scar on stage during the fitness portion, and held my head high, knowing I was slowly dying nine months prior and was now standing on stage competing for the title of a lifetime. I held hands with the contestants next to me and I just remember the feeling I had when the announcer said, and the next Mrs. New Jersey International 2021 is… Sarah Campbell. I had to take a moment to step forward but in that moment I knew I was exactly where I was meant to be. I went from feeling like I could never win, having low self confidence, feeling ashamed of my body, to not only winning the state title but taking home the Overall Evening Gown and Interview award and placing in the Top 16 at the Mrs. International pageant out of 55 amazing women from all over the world.

Life can be unpredictable and messy at times. There are going to be days that are so hard you feel like you can’t get out of bed and then there will be days that will be so magical you wont want them to end. That is the true beauty of life. In order to have those amazing days, we need to experience the awful ones. The awful days that make us stronger, that challenge us to grow, and make us who we are. Believe in yourself, take care of yourself, and find your purpose. Are you going to let your awful days define you or are you going to show them who is boss? The choice is yours.

Sarah is a first grade teacher and lives in New Jersey with her husband Justin and their daughter, Merin. Sarah was ...