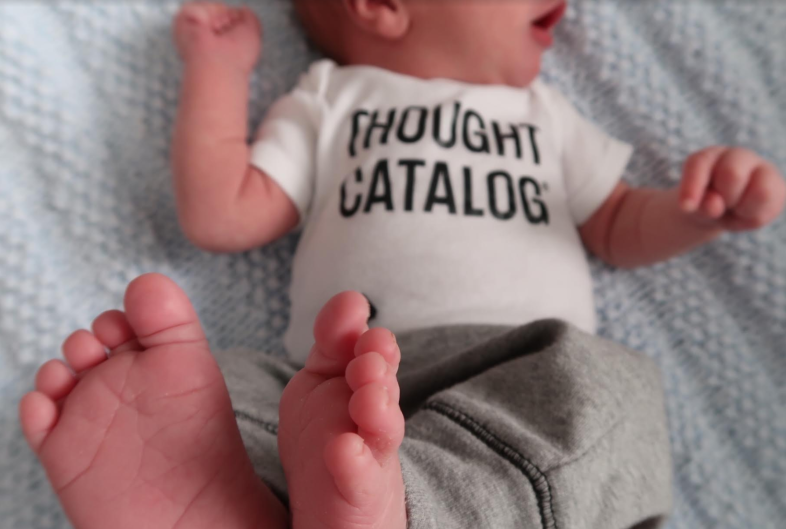 It was a surprisingly easy decision to make: No posting kid photos on social media.

My wife and I made this decision not because, like everyone, we’ve been bored to death by endless baby photos from friends. Not because I’m worried about anyone’s safety (though as a writer I’ve had a few creepy encounters). But to look at a sleeping baby, defenseless and pure, and think, How many likes do you think this will get? struck us as particularly gross.

It’s been interesting to watch the evolution of my generation on social media for the last decade or so. In three sentences, it would be: Flocking to social media because there were no adults. Complaining about social media being ruined by parents and co-workers posting baby photos. Becoming the very adults who won’t stop posting those photos.

The sad reality of the human condition is that we figure out systems and try to game them. Tell humans that money is important, and we’ll try to earn a lot of it. Tell us that God exists and we’ll literally kill each other to try to win his favor. Tell journalists that pageviews matter and within a few short years they’ll have tossed out a century of objectivity and reverence for the truth. Any system, any metric—give us enough time and we’ll inevitably corrupt it.

Which brings us to the nasty, addictive state of social media today. Given a set of arbitrary metrics—fake internet points, essentially—we spend our days trying to rack up as many of them as possible, whether they’re likes, hearts, favs, views, whatever. From political opinions to clever quips to travel porn, I’ve written that social media is no longer about portraying our actual life, but creating a sort of life performance—one that makes us seem better, more interesting, more attractive, and more successful than our peers. And increasingly it feels like kids are used as another way to achieve this. It’s rarely the crying, sick, suckling or shitting kid that’s photographed and posted, only the smiling, the achieving, or the creepily posed baby. As if they say as much about us as a fancy car…or as little about us as a shot of our last meal.

It strikes me that there is something extra perverse about how quickly we feel like introducing children to this system of online status and virtue-signaling and how naturally we see them as props in our own performances. My son’s first appearance in the attention marketplace is really supposed to be at one hour old? At this deeply personal and meaningful moment, should anyone really be thinking: How can I share this with as many people—most of them strangers—as possible? C’mon. At least we got to wait until we were teenagers until we had to contend with any of that.

And for what gain? Most of us are not Brangelina, offered millions of dollars for access to these private moments, nor are we vloggers or influencers who can at least claim it’s part of their profession. No, the vast majority of us do it for free. For imaginary internet points!

No one makes any advertising revenue off of that. There’s no “hook”—as design expert Nir Eyal has talked about—that traps anyone in an endless loop of checking, re-checking, validation and incentive. It’s just a little faster than mailing a polaroid or waiting until Thanksgiving to see everyone.

Not that ad revenue or hooks are necessarily evil. I’ll write this article and I hope you’ll read it. I’ll show you a picture of my dog being cute. I’ll post a video of my donkeys or my goats. Even if that was exploitative, who cares? They’re animals—they like the camera because it usually means treats. In any case, I own them! They have to earn their room and board somehow.

My son is a person. Do I really want to sell a piece of that off so I can get a few more followers? Do I need Facebook as a broker between me and my relations? We are supposed to be upset about NSA spying and government intrusions, yet we turn around and share the most intimate details of our lives to help multi-billion dollar companies. If that wasn’t bad enough, we’re also going to opt children into this system before they’ve barely taken their first breath?

My hardcore atheist friends who pray at the altar of Richard Dawkins scream bloody murder that their parents forced them into a religion before they could decide for themselves, but I tell them that Sam and I have decided to wait to expose our son to the prying eyes of social media and many of them look at me like I’m the one who needs to see a therapist.

To suggest that perhaps we could all be a bit more private and that not every single aspect of our lives needs to be shared, instantly, especially those that involve kids, isn’t heresy, it’s basic human decency. That all this sharing is less about enjoying your life or the moment and more about making people think you are—this is just being honest. It’s controversial (and I don’t relish the reaction, or offending any friends) because I am questioning the dominant religion of our attention economy—where if something didn’t happen on the internet, it feels like it never happened at all.

These days, I am always a little impressed when I find out someone I know has a (happy) family I hadn’t known about previously. They weren’t leading a double life—they were leading an actual one. A private one they chose—GASP—to keep private.

We should give them that because they’re still too young to realize that it’s something valuable, and because we remember what life was like before any of these services were invented. And we should give them the freedom and privacy that we were lucky enough to have by default.

It’s their birthright too.