Like every kid, I was forced to read Fahrenheit 451 in high school.

If you’d asked me what it was about before last week, I would have told you: “Firemen who burn books.”

And if you’d asked me why on earth they did that, I would have answered just as confidently: “Because a tyrannical government wanted them to.”

There is a trend afoot to conveniently remember the works of authors like Ray Bradbury and Aldous Huxley as warnings against distant totalitarianism and control. But this only scratches the surface of what these books are about.

Earlier this year a community college student in San Bernardino protested being required to read a Neil Gaiman graphic novel in one of her classes. It was too graphic, apparently. Her father—who does not seem to understand that his daughter is a separate human being (an adult one no less)—told The Los Angeles Times, “If they [had] put a disclaimer on this, we wouldn’t have taken the course.” A mom in Tennessee has complained that the gynecological information in the book in the bestselling nonfiction science book, The Immortal Life of Henrietta Lacks, is too pornographic for her 10th grade son.

While these conservative complaints about the content of books is unfortunately as old as time. We’re also seeing surge in a different type.

A Rutgers student has proposed putting trigger warnings on The Great Gatsby. Robin Thicke’s song “Blurred Lines” was banned on many college campuses for promoting rape. Last year, Wellesley students created a petition to remove an art project featuring a lifelike statue of a sleepwalking man in his underwear in the snow because it caused “undue stress.” Controversial speakers (many conservative) have been blocked from speaking at college commencements. Pick up artists—never convicted of any crime—have had their visas revoked due to trending Twitter hashtags.

In August, Jezebel ran the headline “Holy Shit, Who Thought This Nazi Romance Novel Was a Good Idea?” I remember thinking, “Um, probably the fucking writer who spent a lot of time writing it.” Whether they succeeded at making anything good, I cannot say, but should they be shamed for trying? It’s not as if there aren’t good books of Nazi love stories. In fact, there is one called The Reader!

The people in these examples are certainly a bit ridiculous—but by no means bad. None of them see themselves as censors, naturally. They were being sensitive,outraged, protective or triggered. And to be fair, most of their complaints and protests stop short of actually saying “This should not be allowed anywhere.”

But that distinction matters less than they think.

Let’s go back to 451, which I found myself re-reading recently. It begins with Guy Montag burning a house that contained books. Why? How did it come to be that firemen burned books instead of putting out fires as they always had?

The firemen have been doing it for so long they have no idea. Most of them have never even read a book. Except one fireman—Captain Beatty—who has been around long enough to remember what life was like before. As Montag begins to doubt his profession—going as far as to hide a book in his house—he is subjected to a speech from Beatty. In it Beatty explains that it wasn’t the government that decided that books were a threat. It was his fellow citizens.

“It didn’t come from the government down,” he tells him. “There was no dictum, no declaration, no censorship, to start with, no!”

In fact, it was something rather simple—something that should sound very familiar. It was a desire not to offend—of an earnest notion to literally have “everyone made equal.” And it’s at the end of this speech that we get the killer passage:

You must understand that our civilization is so vast that we can’t have our minorities upset and stirred. Ask yourself, What do we want in this country above all? People want to be happy, isn’t that right?…Colored people don’t likeLittle Black Sambo. Burn it. White people don’t feel good about Uncle Tom’s Cabin. Burn it. Someone’s written a book on tobacco and cancer of the lungs? The cigarette people are weeping? Burn the book. Serenity, Montag. Peace, Montag. Take your fight outside. Better yet, to the incinerator.

And before you get offended, let’s clarify what Bradbury means by minorities. He’s not talking about race. He’s talking about it in the same way that Madison and Hamilton did in the Federalist Papers. He’s speaking about small, interested groups who try to force the rest of the majority to adhere to the minority’s set of beliefs. 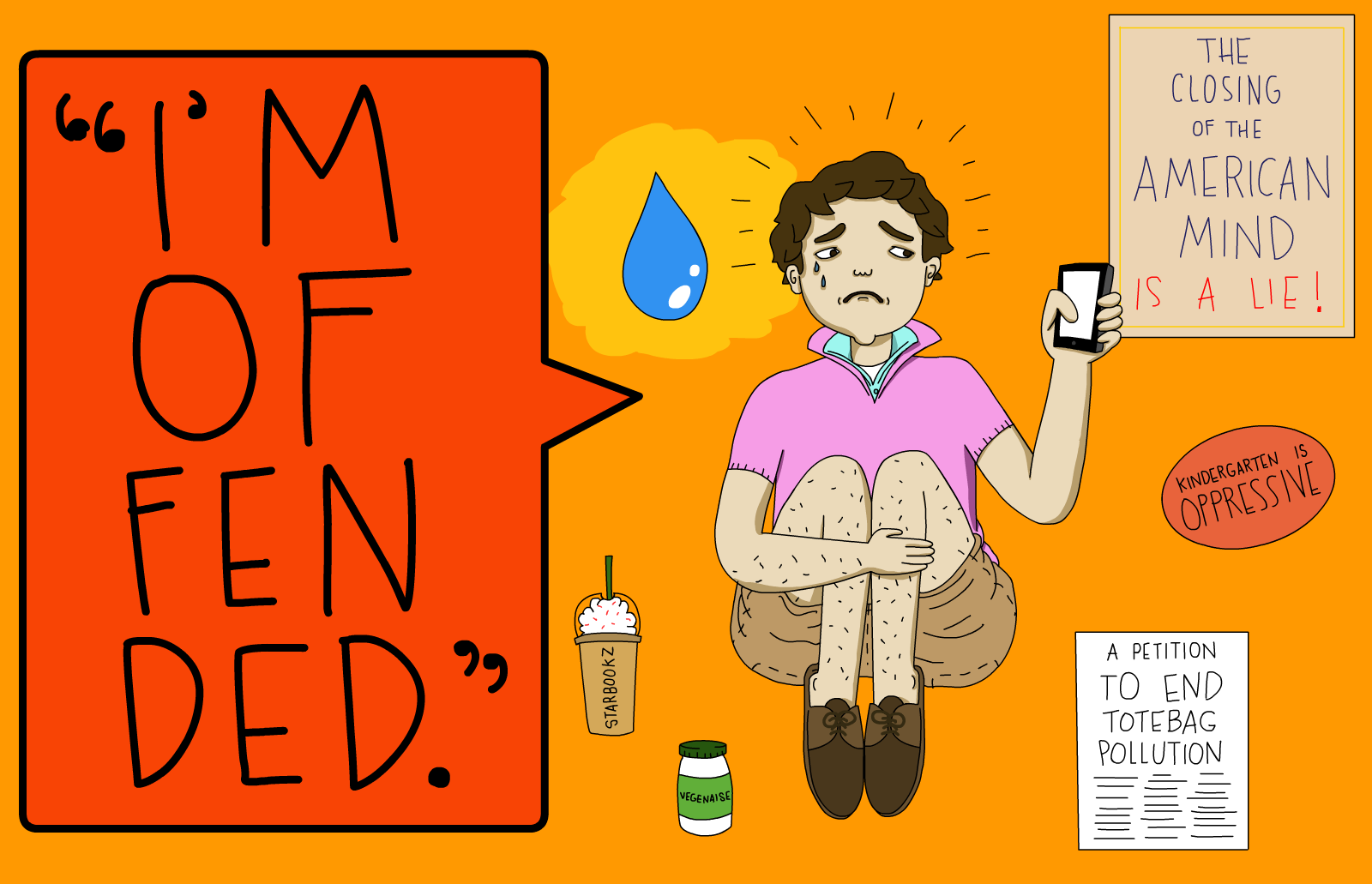 I don’t mean to cherry pick. I see no need to pile on to college students as being particularly responsible for the “coddling of the American mind.” (Great piece, read it.) Though I do find it ironic that we require kids to read this book in high school and just a few years (or months) later, they’re leading the charge on exactly the kind of well-intentioned censorship Bradbury was talking about. I don’t mean to say that these examples come close to the kind of overt censorship that every reasonable person dreads. But I do mean to say that they come from the same place—and very alarmingly—ultimately end together in a much worse place.

In the 50th anniversary edition, Bradbury includes a short afterword where he gives his thoughts on current culture. Almost as if he is speaking directly about the events above, he wrote: “There is more than one way to burn a book. And the world is full of people running around with lit matches.”

There’s that saying: The road to hell is paved with good intentions. When it comes to censorship, one might say that the road to thought and speech control is paved by people trying to protect other people’s feelings.

It’s important to realize that today, we have a media system paid by the pageview and thus motivated with very real financial incentives to find things to be offended about—because offense and outrage are high-valence traffic triggers. We have another industry of people—some call them Social Justice Warriors—who, despite their sincerity of belief, have also managed to build huge platforms by inventing issues and conflicts which they then ride to prominence and influence. One might call both of these types Rage Profiteers. They get us riled up, they appeal to our notions of fairness and empathy—who likes to see someone else’s feelings hurt?—without any regard for what the consequences are.

Of course, the real and fair solution is much less politically correct but effective. It’s to stop trying to protect people’s feelings. Your feelings are your problem, not mine—and vice versa.

Real empowerment and respect is to see our fellow citizens—victims and privileged, religious and agnostic, conservative and liberal—as adults. Human beings are not automatons—ruled by drives and triggers they cannot control. On the contrary, we have the ability to decide not to be offended. We have the ability to discern intent. We have the ability to separate someone else’s actions or provocation or ignorance from our own. This is the great evolution of consciousness—it’s what separates us from the animals.

What also separates us is our capacity for empathy. But how empathetic the speech we decide to use is choice for each one of us to make. Some of us are crass, some of us are considerate. Some of us find humor in everything, some of us do not. It’s important too—but those of us that believe it and live our lives by a certain sensitivity cannot bully other people into doing so too. That sort of defeats the purpose.

There is a wonderful quote from Epictetus that I think of every time I see someone get terribly upset about one of these things (I try to think about it when I get upset about anything): “If someone succeeds in provoking you, realize that your mind is complicit in the provocation.”

He said that some 1,900 years ago. Even then we felt that it was easier to police the outside than examine our inside.

Control and discipline of one’s own reactions make for a successful person and a functioning society. I don’t think you want to live in a world where that isn’t the expectation of each of us. I don’t think you want to see the things that will need to happen when the burden of making sure everyone is happy and not offended is put on the government—or worse, a corrupt and bitter blogosphere.

But that seems to be the road we’re going down. Even though we’ve been warned.