Internet bullying is no joke. That’s why I’m so very pleased to see something amazing come from a rudely captioned photo taken by a body shaming jerk and posted on 4chan. The two side by side photos show the reaction of what happened when this man was laughed at while he was dancing. In the second photo, you can see how hurt he looks and stopped getting his groove on.

Dancing should be one of – if not the most – freeing physical gesture a human has to just “let go”. Everyone deserves to dance and feel like themselves. To take that happiness away from someone because some jerks felt the need to poke fun at him for their own sick amusement is disgusting and cruel.

Yesterday, Aina Singh – another member of a girl group I’m a part of with over 1,700 other amazing women mostly residing in the Los Angeles area named GNI – shared her disgust over this cruel post on 4chan with the group. Several felt appalled and saddened by the post, myself included. Soon after, another member of the private group, Cassandra Fairbanks, took to Twitter to try to find “the dancing man” to invite him out to Los Angeles for a special dance party for him and the group of 1,700 women.

Almost instantly, several other women from the group along with hundreds of others, began to share the photo on social media in hopes of turning a negative into a positive. A hashtag was created yesterday reading #finddancingman and with posts all over Twitter and Instagram, it quickly became viral. Other hashtags used to encourage the movement are #dancefree #keepondancing and #dancingman. Amazingly, he was found today just over 12 hours later.  His name is Sean and he lives in London. He created a Twitter account in order to correspond with Fairbanks and accept the offer to come to Los Angeles to party with us. His Twitter account already has over 5,000 followers.

A GoFundMe page was created to help raise the funds to show this guy the time of his life! A dance floor filled with body-positive women in Los Angeles ready to get down with Sean, aka the dancing man or @Dancingmanfound on Twitter. Over $2,000 has been raised in just over two hours. Additionally, any proceeds not used for #dancingman will be donated to an anti-bullying campaign.

Shortly after the GoFundMe went live, Pharrell took notice and reached out to Fairbanks via Twitter expressing interest in the special dance party. There’s even a petition to have Sean brought on The Ellen Show It’s truly beautiful to see how big something like this has become in such a short time. Fairbanks set out to show this man a great time and create a reminder to others to not body shame and the ripple effect is so beautiful and positive. The internet does good things sometimes. 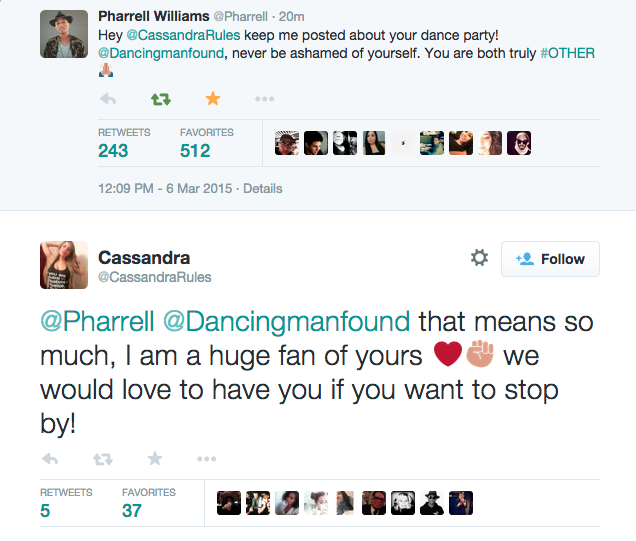 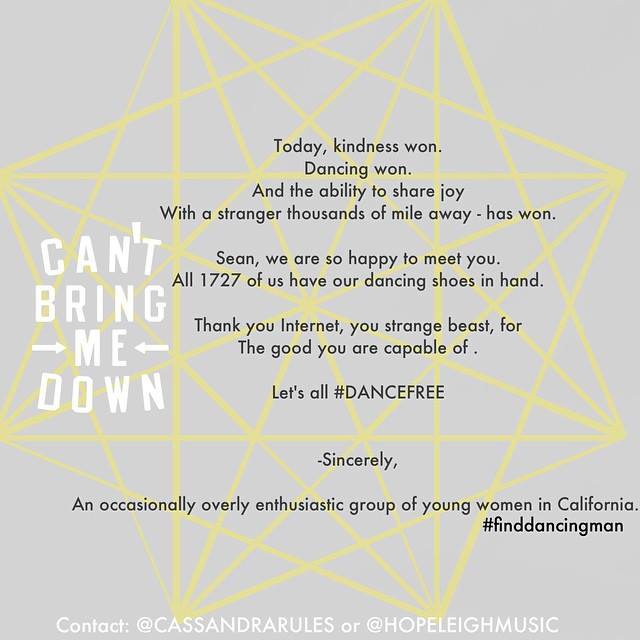 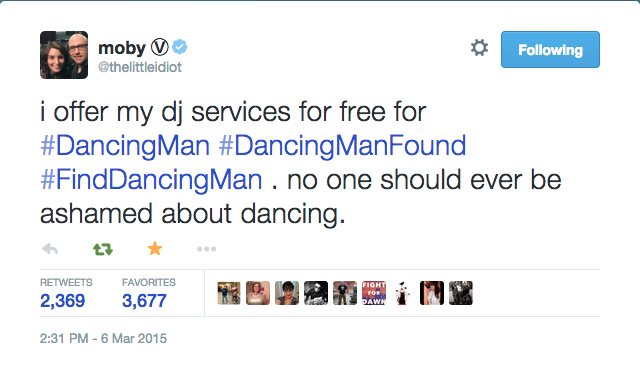 On Friday March 6th, just after this article went live, Moby tweeted his interest in djing at the event for Sean, “the dancing man”, free of charge.  Andrew WK also expressed interest over Twitter and as the media frenzy continued, the twitter of the LA Coliseum offered up the venue.  At this point, not many details have been confirmed but the event for Sean is in planning stages. The GoFundMe has reached over $36,000 as of Monday, March 9th and the proceeds not directed at Sean’s experience will go to an appropriate charity.