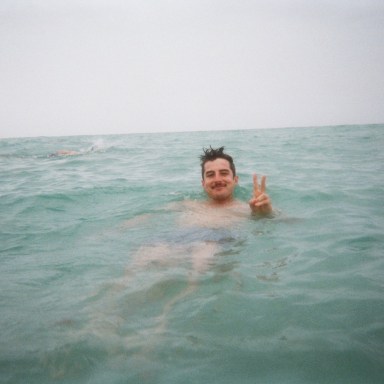 He messaged me sometime in December. I was back home for break, scrolling Facebook.

I knew we hadn’t but I couldn’t believe someone so stupidly cute was messaging me. I drafted five or six replies before sending back a very smooth

hey
I don’t think we have.

We talked into the night. We flirted and made bad jokes. We sent each other links to videos and music, and the days were passing by. I told him about my friends in the suburbs and we talked about our majors and how uncertain we were about getting jobs. I laughed about his violent typos and he called me out on mine. For the record, he was right. I was being a total hypocrite about typos.

The weekend he finally came into town, my break was long over and I was back in school. We’d been talking for weeks but the mounting pressure of meeting in person had me melting at the seams.

The plan was to meet at Kiss N Fly, the most popular gay bar in Austin. It was big enough to slip away if it didn’t go well, but small enough to feel like a full party. I got there first and waited in the back, frantically scrolling through my phone with the foolproof guise of “chill-person-standing-around-for-no-particular-reason.” He eventually stepped onto the back patio and I spotted him, smiled, and hid behind a tall person.

I just wanted to inspect the situation first. He was shorter than I expected but beefy. Like, shoulders wide enough to be a 6’2” athlete. He wore a simple blue-striped shirt, torn jean shorts, and Nikes. I finally said hello he pretended that he didn’t know me, but only for a second. He was as funny as he was in his messages.

He listened and laughed at my stupid jokes, then added to them without thinking. I told him I was happy to see him and he said he felt the same. He said he couldn’t believe we’d waited so long. I said I had to make sure he wasn’t a serial killer. He said he still wasn’t sure if I was or not.

After something like an hour and two vodkas, we were dancing. The sweaty mess of Kiss N Fly swept us up as underage kweens and overage queens filled the floor. We started kissing.

Not long after we were using the word “boyfriend.”

We threw ourselves from Austin, to Norman, and back, but because of the nine hours between both cities, we went about the romance on spare weekends. Once a month. Ish.

As the semester ended and summer came through, our visits happened more frequently. We started to get an almost unhealthy amount of sun and we drenched ourselves in guacamole at Mexican restaurants. Once, in July, we snuck into the rooftop pool next to my building and laid claim to it without any clothes on. The whole thing felt like a gay John Hughes movie.

Another time, we spent the day floating in Barton Springs on very cheap foam noodles. He said he was ready for a nap and I agreed, so we packed up our stuff and drove back toward mine, hot air blowing into his navy F-150. When he pulled over to get some waters at a gas station, he leaned over to kiss me. I wondered how I’d got so lucky. He went in, then walked out of the gas station with four bottles of water and two Red Bulls, rocking his hips side-to-side because hydration was a great reason to dance.

On the rest of the drive back, he drank the Red Bull in seconds. He ran through a light, and sped around corners through my neighborhood before breaking in front of my apartment. Right before we went inside, he kissed me again and said he couldn’t wait to live in the same city. I couldn’t tell if the speed was bold or reckless but I didn’t want to question it.

We didn’t slow down from there.

Into fall he gave me more than I expected or felt that I deserved. He made the nine-hour drive to Austin six times. I’d driven north twice. He gave me DVDs and playlists to follow. He gave me ideas to write about and stories to read. He helped me wake up for summer school, helped me finish an application to a new program. He helped me come out to my extended family. Actually, he came down to Austin to meet them in person and hold my shaky hand when I told them he wasn’t just a friend. Being brave with someone else made being brave feel so much simpler.

But then the distance started to weigh on us. Maybe it was that we were too impatient to see each other, or that we’d been pretending a distance relationship would be easy, or that we’d been flirting with other guys while we were apart. Maybe it was just that we were nineteen and twenty-three and dumb. Whatever it was, we could both feel the connection fading as fast as it had come.

“OU Weekend” was the last time we saw each other. Both of our universities met in Dallas to watch our football teams play in a rivalry game and drink like the world was ending. I felt like everything would come back together that weekend. It’d be a big party with my friends and his friends and we’d be fine — no issues.

Instead, it was all disjointed and we couldn’t stop fighting.

He wanted to do one thing; I wanted to do another. He rushed from one party to the next; I threw a fit instead of just telling him that I needed to slow down. By Sunday we were hung over and I hugged him goodbye in the parking lot of a Best Western Inn.

It was a gray, humid day and he was sweating when he leaned in to hug me. We just held it there, upset that we’d spent the weekend fighting and not wanting to let go. He was breathing heavy but was trying to be still. We said “see you in a couple weeks” and didn’t mean it.

Not two days later, we called it all off over a stream of texts and calls.

I cried and whined to friends. I took runs and tried to ignore things. I cried some more. Then, eventually, I decided to stop being such a sad llama and somehow recover by deleting him on Facebook. It was the only real tie we’d had left and it had been the start of everything, so it felt right. I didn’t want to see him go to parties or be happy with friends. It wasn’t fair. It wasn’t fair for me to say it wasn’t fair.

So I deleted him and, surprisingly, time kept moving. We graduated from school and found new friends, new jobs. I moved to New York City and he moved south to Dallas. I’d hear about him through friends but we never really spoke. I never added him back to Facebook.

I would, though, go back to his profile sometimes. The “non-friend” vantage point was something I could handle. I could see if he changed his profile photo or posted a public status by accident. Part of me could pretend that none of it had happened, and in the same delusion, part of me could hope it’d all start over.

My room filled with blue iPhone light. It was 1am in Brooklyn and I had to work in the morning. I rolled over to see a message from my friend, Andrea.

He’d been renovating a house in Dallas with a rare enzyme in its walls. The parasite took to his lungs, and soon his other organs, as it only does for people with HIV, something he had but didn’t know he had. In about a week, his body began to shut down. A few days after that, he passed away with his family around him.

I went to work the morning after I found out. I was at my desk and in meetings but not.

I was in Austin and nineteen years old. I was in pools and the navy F-150.

I was on his Facebook page later that night.

That’s right, I thought. I deleted him. I deleted him. This is something I chose to do. Of course I hadn’t heard he was sick. Of course I didn’t get to know. Why should I be allowed to cry? What if his friends had tried to find me on his friends list? What if they thought I wanted nothing to do with him? Hadn’t I wanted nothing to do with him? What if they’d tried to tell me? What if he’d tried to tell me? Why am I making this about me?

The questions went unanswered for a while. I didn’t know how to talk about it because everyone around me, everyone in my new life, knew me after him. They could sympathize but the fact that they didn’t know him just added to this irrational fear that none of it had even happened.

In a few weeks, I reached out to a close friend of his and let out some of my emotions. They’d remembered us together and it felt like touching my feet to the ground — our love had, in fact, been real because they had seen it.

Soon after I felt comfortable requesting him back on Facebook. His mom approved it. She was running his page now. She’d posted about his last days, and replied with grace to the outpouring of love from his friends and coworkers. She’d also changed his profile photo to a picture from a high school show. A beaming, shirtless him in Victoria’s Secret angel wings looked back at me and I hovered my mouse over his face.

I thought about the Britney Spears concert we’d seen together in Dallas. I thought about how he had been stressed and hyper beforehand, then giddy and boyish after.

I thought about working out to “Till the World Ends” and wanting to look good before we had a weekend visit.

I thought about telling him about the time I sang “Lucky” in the corner of a classroom when a group of kids let me know it was a gay thing to do, before I’d asked them what “gay” meant.

I thought about how, right after I told him, he played “Lucky” on the stereo of his truck. About how we both sang along and how he kept driving.

I turned off my computer.

There are days I’ll go back to his Facebook page and the angel wings photo that hasn’t changed. It’s nice to relive that summer and a version of myself I hardly recognize.

But then there are days when his page will come to me. His mom will get on and like things people post — like videos of dogs and drag queens. She liked a post of mine once and the little red number caught me off guard. I swallowed the rock in my throat. Then I laughed. It’s like he’s still in on the joke.

Nick Delisi is a copywriter and photographer born and raised in Austin, Texas, now based in New York City.