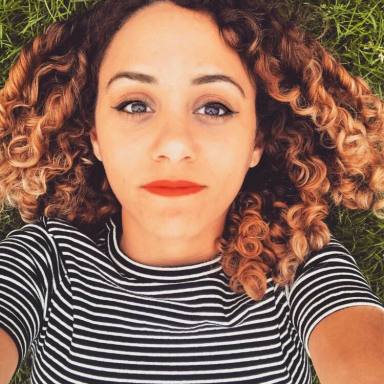 Your twenties are advertised. Talked about. Spoken of as the “best years of your life.”

You’re young and wild and free. Your whole life is just one long Levi’s commercial.

For most of my early twenties I wondered when the emotional tornado was going to start feeling good. When was all the drunk dialing, insecure, scared of success, scared of failure, stuff, was going to start feeling like “the best?” My life was littered with mono men, our name for men who are like mononucleosis, in the sense that they’re always around but never really there. It didn’t feel like the best time. And if it was, what did I have to look forward to?

In reality though, your early twenties are the adult version of toddlerhood. You are learning the mental versions of all the basic stuff. Everything you learned as a baby, but now, in your mind. Walking. Talking. Respecting yourself enough to not date guys who ask you to bring beer on your way to their parties.

It’s a lot of basics. And maybe people forget, just like they forget what being a kid was like. Take me back, they say, I was young and carefree. Homie no you weren’t, you were stressing about who was your best friend because third grade etiquette demanded we each only had one. You wondered if long division was going to be the end of you. You were worried about different stuff, but it felt just as big. You were trying to talk and walk, and you were falling down, a lot. It just feels like less now, because you have to go to work and pay bills. But when you experienced childhood, there was sometimes stress, sometimes disappointment. It was exactly the same, as far as I see it. You were smaller and your problems were smaller, but to scale, it felt the same.

There is bass to their words, because they are older than you. You say, I am young and I don’t know. You must know better. You keep telling me that these are the best years of my life, and I keep trying to see that.

But now, having just recently turned 26, I realized that the only thing young about me was that I didn’t trust myself enough to tell older people when I thought they were wrong. I was worried it would imply I knew what was right, which I didn’t and still don’t. But in my heart there were times I thought, wow these people have forgotten some things. Times when I thought Hemingway was right, men don’t grow wiser, just more careful. But I didn’t have it in me to tell them, or even trust my own instincts to believe myself. And my instincts were that the early half of your twenties are rocky because they are the jack hammering for the land you’re gonna build your house on.

Your early twenties isn’t the fun romp it used to be. Quite literally, 30 is the new 20. I will, at 30, be the adult my parents were at 20. At 25, my mother was financially responsible for herself, happily married, and moving to a new country. At 25, I was looking for my keys on the floor because I’m late to my first brunch of the day. It’s no longer something you read in Cosmo. It’s true statistically. It’s hard facts true.

The truth is, your early twenties kinda suck. You’re a teenager with a debit card and too many feelings. Emotional toddler with a dead end job and gay thoughts that terrify you.

In those years, the maybes of mono men grow more and more exhausting. Eventually you realize that you can just be alone. It gets less scary, but more importantly, the alternative, the maybes, suck. That their maybes are a lukewarm shower. You learn the pain of lukewarm. Of guys or girls that kind of want to see you but keep you on hold while they weigh their options. You learn that maybe hurts more than no.

You can lean back, for the first time in your life. That feeling you’ve had your whole life, where you’re in a supermarket and you can’t find your mom? You never needed another person to fix that in you. And the first half of your twenties, boy, do you try. Stumbling around the dating scene going “are you my mother? Are you? Are you?”

Sometimes you find one guy who’s doing the same thing. He’s there in the supermarket. He’s down to be your mother, if you’ll be his too. Maybe you stick with him. You get close. You guys barely do anything else. You don’t write, he doesn’t pick up the guitar anymore. He doesn’t cook, he doesn’t push to make partner, he doesn’t interview. When you met him he wanted to be his own boss or open up his own store, or climb to the top of his company, or travel the world. That man is now gone. As are you. You send out resumes half heartedly. You can’t remember the last thing you acted in, applied for, drew. Neither of you see your friends very much. No one does anything they want, but it feels good.

The thing is, when that relationship crumbles (and it should crumble) you are sadder than you were before you met him, and it’s a good thing if it falls apart. Some people’s early twenties codependent relationship turns into their marriage. It is a lucky thing if you and him can call it quits because you both see what it’s done. You tell each other that if after the work is done, maybe you guys can fix it. If one day, you’re both single, but you’re independent, you can go back to it. But not now, not like this. So you break up. You leave your haven.

But not everyone does that. Some stay safe. They usually eventually get bitter, because being each other’s supermarket moms is a full time job. It means you don’t have to be scared, but it also means you never get to do other things. How convenient for two people who are scared to fail. To never have to try.

This relationship, if married, usually turns into “I wasted my life with you” being yelled across an Outback Steakhouse. The worst part is, neither person is even bad. But complacency left untouched, becomes bitterness. You know all this when you leave your sweet codependent nest, but you still think you’re going to die of despair.

You wonder if it’s possible for your skin cells to just not wanna hang out together anymore. They’ll just become apathetic and wander away from each other and you’ll disintegrate. You wonder this and tell no one because you don’t want them to think you’re a crazy person. They tell you you’ll find someone else, but it feels as if you cut off your arm, and are now expected to go on living normally. Your arm moves to Bushwick.

You meet new men, and hope that one of them will glue his body to yours and it won’t hurt so much. None of them do. Which is lucky, because if they had, you might find yourself in the same codependent thing you just left.

Once you’ve tried to find it in one of your mono men, and fail enough times, it hits you. You can be your own mom. You can tell the kid it’s ok, mom’s right here. You can stop looking for it in a man. Somehow, somewhere in your late twenties, you start having Cher feelings about relationships. The stuff she’s said starts to feel true in a way it never has. It used to just sound good in Instagram posts, “men are a luxury”, “men are dessert”, but now it is the truth. Now you don’t wait for the text, because you know how much maybe hurts. More than no, turns out.

You know this, finally, in a real way, because you’ve explored the other options. You’ve experientially learned what people always told you.

It’s not just flat platitude advice anymore. It’s him texting you at 2 am. It’s him saying he might make it. The apathy in his touch when he dances with you. Maybe is a painful memory. And thank god you punched that wall enough, because, you got sick of emotional bloody knuckles.

Now, you can start to have homeostasis that doesn’t crescendo and fall with his every ghosting.

You realize if you’re not gonna get a hot shower, you’d rather be dirty.

Meriam Raouf is an Egyptian-American writer living in Brooklyn, NY.