By Mélanie Berliet Updated July 30, 2018
Whether you’re gay or straight, the appeal of Domestic Partnership is that you gain additional legal rights as a couple. And because it’s as simple to dissolve as it is to enter into, there’s little downside to forming this type of union (versus its complicated cousin, marriage).

My Experience Getting A Domestic Partnership (Instead Of Getting Married)

“I don’t even want to be domestic partners anymore so you can forget about that,” my boyfriend said, thick with resentment.

We were just past the climax of some silly argument gone wrong, at that crucial point during a fight between people who know each other well when both parties give up on reason and resort to immature proclamations that will be laughed about later. A long-term couple accustomed to the reverberations of fighting, apologizing, and joking about it all.

“Suit yourself,” I retorted. “I never wanted to put you on my health insurance anyway.”

Approximately five minutes later, motivated by a desire to cross “Get Domestic Partnership” off my to-do list rather than any feelings of remorse (it was in the calendar, after all!), I apologized to my boyfriend for overreacting.

Technically, a Domestic Partnership is “a legal relationship permitted under the laws of the State and City of New York for couples that have a close and committed personal relationship.” The concept, sometimes referred to as a civil union, was born out of the desire to recognize diverse, non-traditional family units. Though established prior to the legalization of same-sex marriage to advance gay rights, this law, somewhat ironically, has become a sort of loophole exploited by heterosexual couples eager to secure additional rights while dodging the institution of marriage.

Gay or straight, the main advantage is universally appealing: Domestic Partners get to share health benefits. (Laws vary from state to state, but this is the case in New York.)

Since my boyfriend and I met all of the requirements for Domestic Partnership, it seemed silly NOT to go through with it. 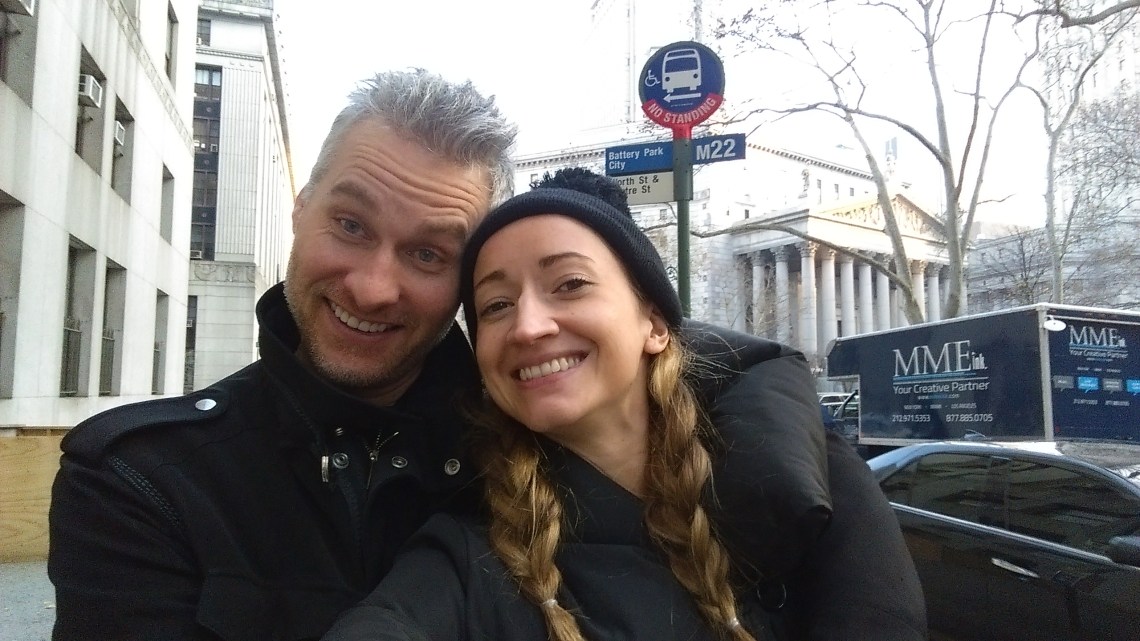 At 3pm that afternoon, we met at the City Clerk’s office in downtown Manhattan, armed with everything we needed to obtain our Certificate of Domestic Partnership in New York: a confirmation number from filling out the appropriate Registration Form in advance online, social security numbers, acceptable identification, and a credit card for the $35 fee.

We waited a shockingly short amount of time before our number was called at the City Clerk’s office, and we became shockingly giddy as we headed from the waiting area to the counter to meet with a representative. We weren’t getting married or anything, but this was a step towards recognizing our relationship in some official capacity—and that felt good. So what if we were doing it to save money on health insurance? Aren’t all relationships rooted in economics on some level? Who needs marriage when you can be Domestic Partnered???

Moments later, we were handed an official looking document confirming our new status, which we promptly photographed and texted to family and friends, captioned: “Yay! Life together just got less expensive!”

Then, of course, came the official Instagram announcement, which was met with a confounding amount of enthusiasm from our circle of friends. A few people even sent flowers!

But back to the practical. In addition to the health insurance aspect, the beauty of Domestic Partnership is that it’s about as easy to disband and it is to enter into. The fee for Domestic Partnership Termination is a mere 27 bucks, which is a whole lot less than the cheapest, most amicable divorce will cost you.

Although my boyfriend and I have zero intention of breaking up, there’s something about remaining unwed that affords us both a certain sense of freedom, however misguided. Whether you consider it a baby step towards marriage, a mini relationship milestone on its own, a means of procrastinating that walk down the aisle, or purely a money-saving measure, there’s really no downside to becoming Domestic Partners once you qualify.

1. Domestic Partnership as a health insurance fix for the unemployed.

When Charlotte Cowles’ boyfriend Dan found himself between full-time jobs, he proposed Domestic Partnership. Why? Because adding himself as a dependent on Charlotte’s health insurance was far less costly than the alternatives. Though hesitant at first, Charlotte came around to the “no-brainer of a decision.” The couple’s elderly relatives were confused about what this meant about their marital prospects, but Dan and Charlotte reassured them it was just another step in a series of relationship milestones, which might very well lead to marriage. (via The Cut)

A few years into dating her boyfriend, Allesandra Codinha knew how to handle The Marriage Question that haunts all couples of a certain age who’ve been dating for a certain amount of time. She was confident in her unwedded status—until the November 2016 Presidential election, when a sense of uneasiness drove her to rethink everything, including her relationship status. “There was in the air the distinct sensation that nobody knew what was going to happen; a sort of uneasy miasma that lingered over the coasts, as somewhere, inland, we heard there was rejoicing.”

But getting married as a response to the election of an official she loathed seemed a bit, well, extremist. Domestic Partnership, less so. Codinha writes: “Marriages, for one thing, are a lot like tattoos: extremely easy to acquire, significantly harder to get rid of.” She and her significant other chose the uncomplicated path of Domestic Partnership as a temporary measure, likening it to buying a sofa on the path to long-term intimacy that would one day involve acquiring the entire Le Creuset line and a proper wedding. (via Vogue)

3. Domestic Partnership as the solution to a visa headache.

As a freelancer, Liz Moody assumed that she could follow her boyfriend of five years, Zack, to whatever school he got into and work from there. When Zack was accepted into a program in London, however, that dream proved more difficult than expected. As it happens, a tourist visa would only allow her to spend six out of every twelve months in the UK.

Friends urged Zack and Liz to just get married, but Liz resisted the idea, even though they were such a solid couple that they spoke about “the future as a statement.” Simply put, Liz didn’t want to make such a big decision for purely practical reasons. Luckily, a little research led them to a beautiful workaround: The UK recognizes domestic partners, so defined as “living together in a genuine relationship for two years or more.” Liz and Zack promptly headed to the City Clerk’s office in New York City to register for their Domestic Partnership and then headed to London to live out their lives, happily unmarried. (via XOJane)

What Your Girlfriend Doesn’t Realize She Needs From You