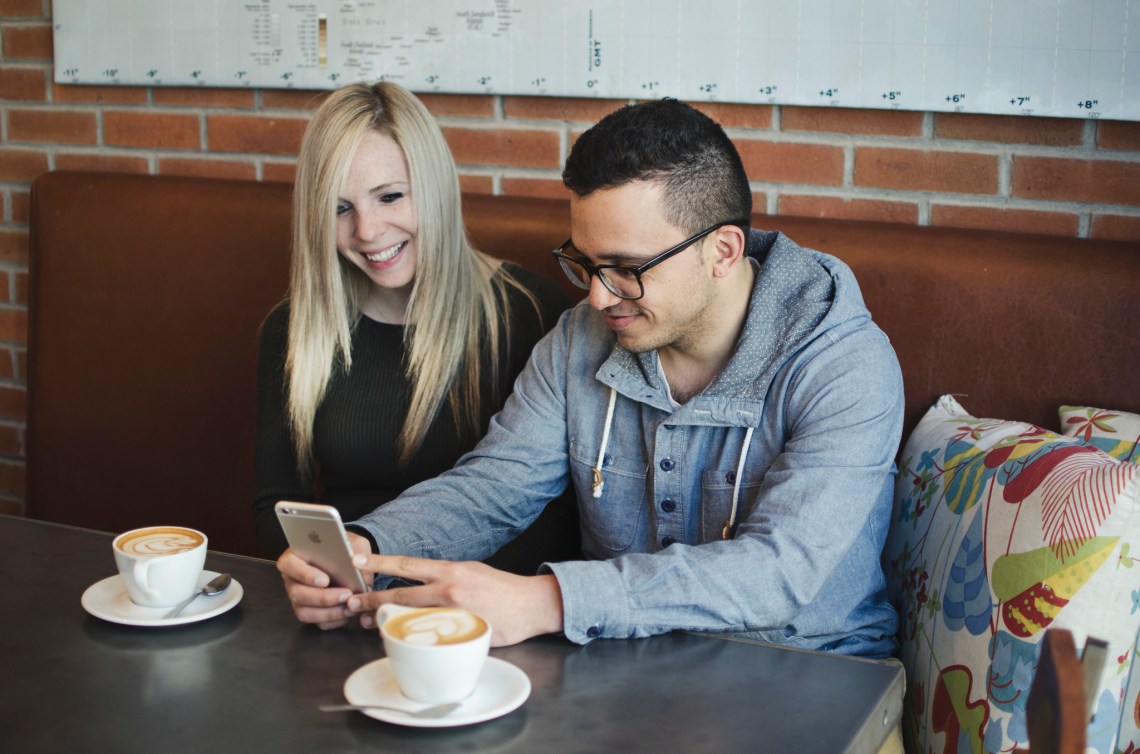 1. Tagging each other in adorably lame comments on social media only you two can possibly understand because you have so many freaking inside jokes together.

2. Catching yourselves doing something totally weird like mimicking an accent (even though you suck at accents) or breaking out into song (even if you suck at singing) or doing a little jig (even if you can’t dance for shit) because you’re just so damn comfortable around each other.

3. Calling your boyfriend or girlfriend for the answer to a puzzle you just can’t solve, like where the extra paper towels are hiding, or what your brother said at dinner the other night that cracked you both up so much.

4. Sitting side-by-side on the couch as you scroll through your own phones until one person realizes how ridiculously anti-social you’re being and texts something like “let’s eat” or “sex?”

5. Crumpling up a napkin and throwing it in your partner’s face to get their attention even though you have nothing to say.

6. Threatening your partner with a fresh boogie because you’re well past the point of booger picking being a private behavior and yet boogers are still gross and sticking them in someone’s face is a great way to get what you want.

7. Wrestling until one person gets hurt or accuses the other of using too much force and/or resorting to cheap tactics. A truce is established, but only until one person’s guard is down and the battle begins all over again.

8. Resolving every important what-to-watch argument with a fiercely competitive game of rock-paper-scissors.

9. Accusing the other person of cheating at rock-paper-scissors and demanding a do-over.

10. Playfully slapping your partner’s butt at the gym or in some other public forum mostly to embarrass them, but also to remind them that you think they’re sexy—and you own that ass.

11. Calling each other for no reason other than to hear each other’s voices and then realizing that you have nothing to say, prompting a somewhat reluctant farewell.

12. Sending each other “sexts” that are more hilarious than arousing.

13. Hiding around the corner in the hallway or opening the front door suddenly and screaming when you know they’re already home because scaring each other is endlessly entertaining.

14. Laughing like crazy until you can’t remember why you started laughing in the first place and then laughing even harder.

15. Telling your mutual friends that you’re busy so you can stay home and do nothing together without interruption.

16. Looking into each other’s eyes and feeling compelled to say something super cheesy but truthful like “how did we get so lucky???”

17. Lying about what you really want to eat because you sense that your significant other is set on a certain cuisine and you just want to make them happy.

18. Finding that you truly enjoy a certain drink or meal that’s not really your thing simply because your partner prepared it and you can literally taste their love.

19. Growing frustrated when the other person wants to nap and you don’t because you really want to hang out and life is boring af without them.

20. Gently poking your boyfriend or girlfriend and/or clanking a few dishes as they nap because you’re desperate for them to wake up already.

21. Fussing over every minor cut or bruise on your partner’s body because you feel their pain vicariously and you want them to heal as quickly as possible so you can both stop hurting.

22. Nagging your significant other to drink water because you can sense that they’re getting way too drunk and you’re trying to protect them from a massive hangover.

23. Feeding them another glass of water and two Advil before bed so they can stand a chance at feeling human the next morning.

24. Keeping track of your partner’s favorite bands so you can surprise them with concert tickets for a special occasion or no particular reason at all.

25. Alerting your significant other when you finally take that magical poop after being backed up for several days.

26. Celebrating menstruation every single month with a “Phew! It’s here!” text and some carefree period sex.

27. Convincing a waiter or a stranger that you’re married just for kicks, but also because you secretly like pretending to be husband and wife even if you’re not quite ready to walk down the aisle.

28. Accusing your partner of “cheating” whenever they watch a movie or a TV show without you.

29. Tucking them in when they fall asleep first or you wake up early and then pausing to appreciate the sight of them peacefully dozing.

30. Experiencing serious disappointment when you wake up only to realize that your boyfriend or girlfriend is already gone for the day.

31. Encouraging your significant other to eat well, not because you care what they look like naked but because you actually care about their health and you want them to live as long as possible so you can be together foreverrrrr.

32. Thanking the universe out loud regularly for orchestrating that critical first encounter because you really are grateful to have met each other.