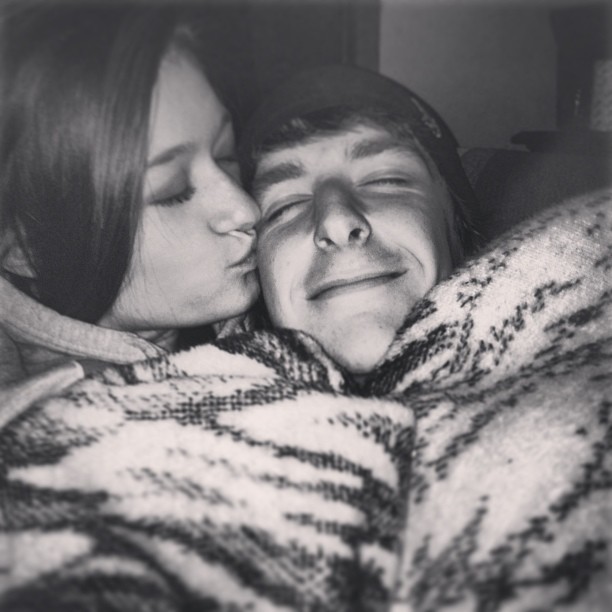 1. That you think his ex girlfriend is a total bitch.

Your boyfriend’s ex is probably a poor excuse for a human—a raging cunt with bad breath and regrettable taste in clothing. But as obvious as it is that she sucks, it would be a mistake to reveal how you feel about her to your boyfriend. Any negative comment about a man’s ex, however accurate, is bound to be construed as jealousy or pettiness. So talk shit all you want among friends, but don’t divulge the extent to which you loathe your man’s former flame when he’s around.

2. That his best friend has a small penis.

No man enjoys hearing that someone he respects and loves is stuck with a small penis. If you happen to be privy to information regarding the penis size of any of your boyfriend’s closest male friends—either through hooking up with them yourself, or knowing someone who has—keep it to yourself. You don’t want to deliver the message that will make your boyfriend feel awkward in his buddy’s company because he’s sure to resent you for it. It’s smarter to let a man hold onto the dream that everyone he likes and admires is sufficiently well endowed.

3. That you think any of your closest girlfriends are really hot.

4. That you hate your [insert body part].

We all have hang-ups about our appearance. But when you harp on the fact that you hate a certain aspect of your face or body, you accomplish two things: You draw your boyfriend’s attention to your physical flaws, and you poison yourself with toxic thoughts. If you want to discuss the fact that you have larger thighs than you’d like or that your hips are too wide or too boyish or too pointy, or that you have tragically large ear lobes, or your eyebrow hair is the wrong shade of brown, do it in a lighthearted way. Make fun of yourself all you want, but don’t proclaim that you “hate” anything about the way you look.

5. That so-and-so is really good at oral sex.

6. That you hate any of your exes.

Maybe your ex broke your heart or humiliated you or committed some awful relationship crime and you regularly entertain vindictive fantasies in which you set fire to his most prized possessions and terrorize him in the middle of the night. Whatever you do, keep your vengeful dreams and hateful thoughts to yourself. It doesn’t matter how terribly things ended with that last guy. It’s never wise to tell your current partner that you hate your ex because hate is an indication of strong feelings and lingering passion. Hate isn’t the opposite of love, after all. Indifference is.

7. That you’re browsing a ridiculously expensive store for fun.

When your boyfriend calls and casually asks where you are and you happen to be browsing an insanely expensive boutique (because it’s fun to gawk at ridiculous price tags and the people who drop thousands of dollars on a sweater without thinking twice), you should always feel free to take a creative license regarding your exact whereabouts. A vague reply such as “I’m uptown” or “I’m at a store” is always preferable to “I’m at Christian Dior” or “I’m on the third floor of Barney’s.” Why set off the “she has expensive taste” alarm if you don’t have to? Unless you’re bleeding to death and need him to send an ambulance, you might as well claim that you’re at Trader Joe’s.

8. That you understand what his mom sees (or saw) in his dad.

You know what people find yet more cringeworthy than the mental image of their parents getting it on (even in service of their own creation)? The mental image of their significant other getting busy with their mom or dad. When you comment, however subtly, that you’re able to see your boyfriend’s father as an attractive, sexual being, you practically force him to watch the most disturbing porno possible. Even if you try to frame your appreciation of his old man’s looks as a compliment by adding that your boyfriend and his dad are built similarly, you’re bound to trigger some unwelcome thoughts that lead him to resent you.

9. That you have a secret stash of cash.

It’s never a bad idea to stash some cash on the sly for emergency use. It feels good to add a few bucks here and a few bucks there to an envelope you keep in the back of your underwear drawer or rolled up inside a pair of striped socks you never wear. A financial cushion provides comfort, especially in the moments when you’re fighting with the person you love and you need to indulge the fantasy of grabbing your cash and leaving for good, if only for a moment. But the point of a squirrel fund is that you and you alone know it exists. Once you admit to having one, it loses its value as your personal safety net. Plus, you’re bound to face an onslaught of suspicion on other fronts.

10. That you flirt with your superiors at work.

We have a lot of double standards when it comes to what’s acceptable for men and women from a sexual standpoint. We celebrate men who go to extreme lengths and/or behave indecently as long as they do so in the name of providing for their families (see: Breaking Bad’s Walter White, Mad Men’s Don Draper, Tony Soprano, etc.). Meanwhile, we demonize women who are willing to use their sexuality to get ahead in the workplace. So if you’re someone who believes its her right to nurture a professional flirtation for the sake of advancing her career objectives, keep it to yourself. Neither you nor your boyfriend will benefit from an honest discussion on this topic.

A lot of independent, progressive women have a tendency to dismiss basic etiquette as antiquated, unnecessary, or, worse yet, offensive—as if by holding every door open for themselves they’re carrying the torch of feminism. But what’s not to like about a well-mannered guy who lets others out of the elevator first, helps with the on-and-off jacket dance, and walks around the back of a taxi cab so his date doesn’t have to scooch across the backseat to make room for him? When we declare that chivalry is dead we give guys everywhere permission to behave less gentlemanly, which isn’t wonderful for women anywhere.

12. That you’re not really the romantic type.

Maybe you’re not really into the frills that accompany traditional dating. You don’t need a weekly “date night” and you’re not into celebrating your birthday and you really don’t want a gift on Valentine’s Day because it’s the stupidest of all Hallmark holidays. The problem is that the things you don’t want now have a way of transforming into things you might kind of like down the line. So don’t pigeon-hole yourself into being above a dash of romance. You’re better off reserving the right to demand a nice night out once in while, and preventing your man from the dangers of feeling comfortably lazy.

Once in a while, your boyfriend will do something unintentionally hilarious in a moment when he’s not in a “funny mood” on account of being stressed out or in a rush. He might trip on the sidewalk in spite of your warnings about the hazards of texting while walking, or accidentally pour milk into his water glass instead of his coffee mug. In these situations, it can be really hard to resist laughing out loud because it’s hysterical to watch someone fall or do something stupid—to everyone except the person who feels humiliated, of course. To avoid stoking ire in your anxiety ridden boyfriend who’s done something laugh-out-loud funny, avoid confessing that you’re laughing at him. Instead, you can claim that you just remembered a funny Tweet from yesterday (they won’t ask you to repeat it since they’re not in the right mindset) or you can always say, “I’m not laughing at you. It’s the situation that’s funny.”

14. That you’ve been proposed to already.

If you have any desire whatsoever to marry your current boyfriend (one day…maybe…if he drops the bro act and gets his shit together in time), don’t tell the man about any official or unofficial proposals you’ve fielded in the past. You might think it makes you look desirable to mention that another dude once had designs to lock your ass down, but what you’re actually doing is diminishing your boyfriend’s power to stage a one-and-only moment, and possibly robbing yourself of another engagement offer.

15. That you’ve had several abortions.

There’s something refreshing about the scene from Girls’ in which Mimi-Rose explains to her boyfriend Adam that she can’t have sex with him or take a bath or exercise for a week or so because she had an abortion the day before. Adam’s knee-jerk reaction—he’s extremely upset that he wasn’t incorporated into the decision making process—isn’t all that surprising. Since guys don’t have vaginas or wombs or the ability to spend nine months transforming a sack of cells into a human baby, they’re not all that well equipped to grasp how a woman might feel when impregnated, or what factors inform her decision to terminate an unwanted pregnancy. So if you can avoid it, you might as well spare a guy from trying to understand your abortion history—unless of course you really feel like sharing, which is your right. Just don’t be surprised if you then have to explain that abortion is a simple, routine procedure and that neither your heart nor your lady parts are necessarily broken as a result.

thumbnail image – mrhayata
Want more from Mélanie? Just follow her on Facebook!
Read this: 28 Signs You And Your Boyfriend Are Doing This Whole Relationship Thing Right
Read this: 17 Signs You’re In A Healthy Sexual Relationship
Read this: 10 Unusual Ways To Show Someone You’re Serious About Them Without Saying “I Do”
Dating Going Out Love & Sex