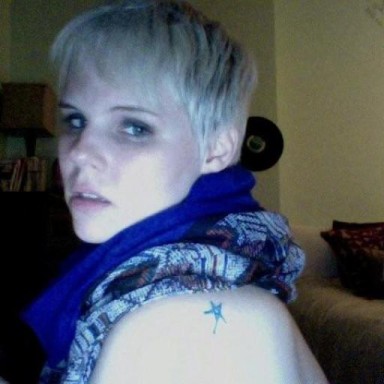 Screw you. Yeah, I know, I know: you’ve played a huge role in giving me the opportunities I now have as a 25-year-old, single, independent female – the whole ‘having control over my own reproduction so I can create the life I want’ thing – and I also know that were it not for you, instead of drinking a delicious coffee from Dunkin’ Donuts and bemoaning the banality of my #whitegirlproblems job in Manhattan, I might be trying desperately to calm a screaming child or dealing with the emotional repercussions of choosing to have an abortion. Yeah, for these things I acknowledge that I am thankful, but really I just want to say: screw you.

I remember well my first encounter with you, at age 18. At that time I finally felt ready to boff my high school boyfriend, and I completely fell for a pill that was marketed as every woman’s dream come true. Only four periods a year! We can wear bikinis and go swimming anytime during the summer! No more planning vacations around that annoying thing called menstruation! We can have sex with our men 48 weeks out of the year without it being gross and weird and morbid! (And let’s not forget Tina Fey’s genius hyperbole of this sacred medicine.) I was SO excited to start popping this magical sex freedom med.

But you met my excitement with something a bit less than, um, exciting. After a few weeks on you, I started to feel pretty glum for no reason. At this point in my life, I had never been depressed before so I didn’t really know what was going on. You clever little bitch, you blindsided me! Things that, before, would have just vaguely pissed me off would now make me burst into tears. At this time I was attending camps to prepare for my first and only summer of marching drum corps (yeah, #nerdalert), and I remember walking around at rehearsal one day in a total haze and pondering why I felt so sad. When I look back on it now, those first few months of our time together are tinted gray.

Like in any abusive relationship, I thought it better to stay with you than to be alone, so I fought off the depression, eventually overcoming it and staying with you for nearly three years. I will confess, it was nice not having a period every month. I saved beaucoup money on tampons and I did enjoy the extra week of sex that came with skipping menstruation. Like most things in life, nothing that good comes without a price, and after I had broken up with my high school boyfriend I slipped into a depressive state again and decided I had had enough with my birth control. But I still wanted my sexual freedom dammit, so I went to the doc and he prescribed me another version of you.

I started seeing someone new around age 22, and we began having mind-blowing sex. But then I found myself, late at night, sitting in his bed and having incredibly intense emotional outbursts about stuff that was totally vague and stupid. I remember one night I ugly-cried to him about the fact that I was about to graduate college in a few months and I would never be able to “be a child again” and I would have to say goodbye to my parents forever and ever. I basically saw my entire adult life laid out before me in exaggerated scenarios. He just patted my back and tried to sooth me whilst my mind slowly slipped away.

Then my first period came. I am not lying or hyperbolizing or even exaggerating when I say that it was not all that different from the scenario Tina played out. After having not bled but once every three months for the past three years, and then suddenly switching to a different version of you, my uterus was all WHAT THE HELL. And so I bled. I bled like I have never bled in my life. I would go through a super tampon in an hour. And I don’t just mean a little bit of blood would drip through, as it is sometimes wont to do; I would pull the tampon out after an hour and it would be completely soaked through. Additionally, I had the worst cramps I’ve ever had in my entire life, before or since. One night I curled up into the fetal position in my boyfriend’s bed, in so much pain that I could not move. He left and went to the store and bought some of those Icy-Hot heating pads that stick to your body. I took some Ibuprofen, rolled onto my back and he placed a heating pad on my lower abdomen and it felt so good that I passed out. I woke up in the middle of the night and my stomach was on fire from the pad, but the cramping had mercifully stopped. Not cool, HBC.

After I finally stopped hurting and bleeding, I went to the doctor and had an intravaginal sonogram. (So fun! Thanks for introducing me to these, HBC!) The doc found that I had ovarian cysts, due in part, he said, to my lack of having regular periods while on my first kind of birth control; he said that having a period each month can actually help “flush” out cysts, which are largely harmless anyway. He told me to stop birth conrol and to get on a steady hormone – to prevent the rabid mood swings and horrific periods – that would still allow me to have a period each month to assist with ridding my ovaries of the bothersome cysts you blessed me with. So he prescribed me something that had the same hormones as my current birth control, but on a steady dose instead of one that cycled thrice each month.

Not unlike most people, I moved to the city from another state and was broke as shit. I had saved up a few thousand dollars interning and living at home after college, but most of that went to feeding and boarding myself. As a newly unemployed transplant, I had to cut costs. I had stocked up on a few months’ worth of you before I left home, and I had about a years’ worth of refills from my doc back home that my mom graciously agreed to pick up and ship to me. To lighten her financial burden, I agreed to switch to a generic version of you. Word to the wise: if you are going through a big life change, don’t ask your body to adjust to a new medication.

I’m aware that they say generic is exactly the same as the brand name. Bullshit. What follows is a list of the symptoms, in no particular order, that I dealt with post-switch to a generic you. My hair began falling out. I would just be in the shower lathering up my head and I would pull my hand down and see huge clumps of hair in my fist. I would get enraged and then sad and then enraged at the smallest transgression. I remember talking on the phone to my new boyfriend, who was on a beach vacation with his family in a locale with no decent cell service, practically yelling at him simply because I hadn’t been able to get in touch with him earlier. The call got dropped and I think I screamed out of sheer rage, and then began to cry because I didn’t understand why I was so angry. My skin got dry and large patches formed that would then become itchy and peel. I got sick a lot for no apparent reason – unrelated to food or alcohol consumption, I would get up in the middle of the night to puke or have diarrhea. My sex drive was completely gone. All of this went on for a couple months, until my boyfriend dumped me and finally I had had enough with you, HBC. So I quit you, for nearly two years.

While free of you, my periods became regular and benign, a welcome reminder every month that I was a functional, fertile female. All of the aforementioned torture-symptoms became distant memories recalled through a fog. Then I met someone I really liked, and I wanted to fuck him, and I wanted to do it without a condom. So I called up the doc and he wrote me a scrip for you, round two. I thought, I’m much more well-adjusted now and no longer going through a stressful move to a new city, so perhaps I won’t react the same way. And, mostly, I was right. But – somewhat hilariously in retrospect – you brought me new, different and equally horrific reactions. You’re so creative!

I started taking you the Sunday after I began my last period. I didn’t take a shit for four days after that. I’m not kidding. And normally I’m as regular as unwelcome announcements on the G train, so you can imagine my alarm. On the fourth day I finally felt the urge to take a dump and then spent an entire morning in the bathroom at work, doubled over in pain as my stomach cramped and tried desperately to purge the shit that it had unwillingly collected. And needless to say, they weren’t exactly healthy poos.

My boobs got sore, my skin broke out and, perhaps most pleasantly of all, the taste and texture of my lady parts did something completely bizarre. My new guy was fingering me one night, and he pulled his fingers out to find them completely coated in a yellowish-white substance approximately the consistency of Elmer’s glue. I was like, well that’s weird, and was slightly embarrassed; then I tasted it and was completely mortified. Normally I love the way I taste, but this was so sour and awful that I basically wanted to die. He said he couldn’t taste a difference, which was a blatant lie in a moment of kindness. No woman should ever be embarrassed of her lady parts for any reason, and for the first time in my life, I was.

Meghan Blalock is a writer living in New York City. She writes a lot of stuff, and probably way too much about ...

We Found Grace In A Bathroom Mirror

An Open Letter To Young Mothers