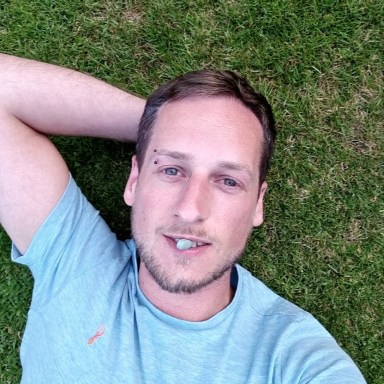 Growing up in the early 80s and 90s, I knew only the very basic, negative side of HIV and AIDS. I remember hearing the jokes in school, not just about HIV but also about being gay. People would say things like “don’t touch that person because they’ve got AIDS” or rumours of two boys kissing would spread around school alongside the dangerous rhetoric claiming that they both had AIDS because of that kiss.

I believed every one of them, and thought every joke was based on fact. These rumours fuelled my self-stigma around HIV and the intense shame of being gay.

From an early age – around 9 or 10-years-old – I knew that I was gay. I had these different feelings toward and a strange attraction to men, and other boys in school. I felt like I should be having these feelings towards women instead, and so I forced myself into believing that I could not only change my sexuality but that I could be attracted to members of the opposite sex. I was so scared that if I did accept and be my true self, then I would be subject to an onslaught of abuse and potential death if I was to contract HIV.

Early in 2011, at the age of 24, I came out. I spent all those years hiding my true self and I could now finally be me. After the challenges of coming out, I was exploring the gay world – making new friends and enjoying my new found freedom from my “in the closet” self.

A few months later, I moved to a new city and was struck down by what I thought was a bad flu. I had aches, cold sweats, nausea and fever, followed by a rash down my arm. After an evening in the hospital after a suspected diagnosis of meningitis, I was discharged after having a number of tests and being told that it definitely wasn’t that. Around a week later, I was called back to the hospital to get my results. The doctor, who was sat in a small, musty-smelling room, told me that one of the tests was for HIV and that the result had come back positive.

Devastation is the only way I can describe how I felt. I thought my life was over. I was adamant that I was going to die and that I’d need to start saying my goodbyes to family and friends. The truth however, was very different to my misunderstanding and serious lack of education around HIV.

HIV is no longer a death sentence when controlled by Antiretroviral Therapy – this is the medication that people living with HIV take daily to control the virus and reduce the amount of virus in the blood to an undetectable level. At this level, HIV cannot be passed on and the term U=U (Undetectable = Untransmittable) is used for people on successful treatment. I started on treatment around three years after my diagnosis and became undetectable around six months after that.

The diagnosis seriously affected my mental health. I contemplated suicide on many occasions, I isolated myself from the rest of the world. I felt contagious and “dirty,” a phrase that perpetuates the stigma around HIV. I couldn’t even hug my mum as I thought she would contract HIV from me. In reality though, people living with HIV are not “diseased,” “dirty,” “unclean” or anything of the sort.

The journey to accept my status and understand the truth about the diagnosis was a long and challenging one. I spent a lot of time reading articles, books and speaking to friends and medical professionals, and after a few years of talking and researching I finally came to terms with being Poz.

Life is now very much unaffected by my diagnosis. I take one pill a day and visit the hospital three times a year – twice for blood tests and once to see my doctor.

People with HIV can, and do, live very much “normal” lives and many of us are still fighting against the stigma that society has created around HIV. Stigma can be the most devastating aspect of living with HIV, but it shouldn’t be that way. Through media (social and otherwise), volunteering and sharing stories, there are so many people challenging the stereotypes, the misunderstanding and miseducation around HIV and challenging stigmatising views and opinions.

Through my HIV diagnosis, my learning and re-education, through my activism, I have learned so much about myself and how I can look after not just my sexual health, but also my mental and physical health.

I’m now using my knowledge, experience, understanding and acceptance of my HIV status to help challenge the misunderstanding and stigma around HIV through social media (@meandhiv), volunteering, talking at work, sharing my story and just opening up conversations about HIV in normal settings.

Only by working together to share our experiences, to educate and to use our knowledge to challenge misunderstanding and miseducation can we reduce stigma, and work toward zero new HIV transmissions by 2030.